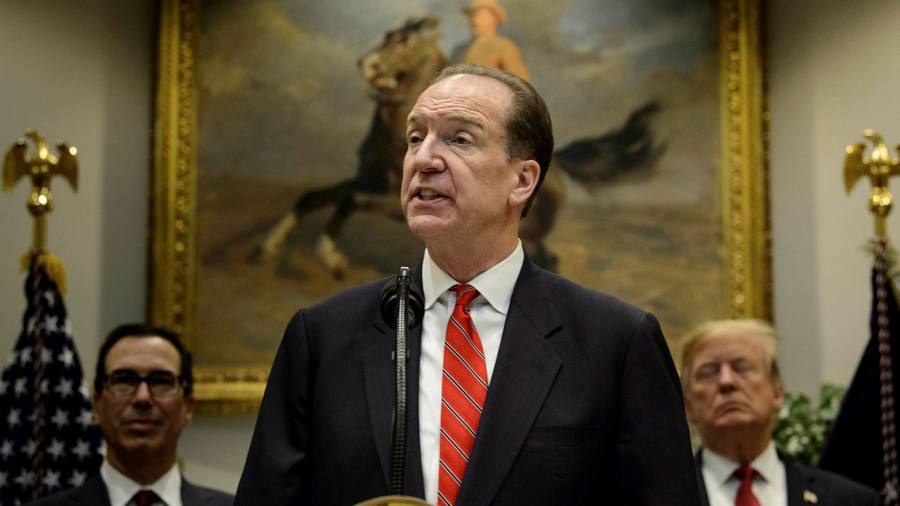 The World Bank Group leadership is under fresh fire from the US administration to step up its climate change efforts, after a blunt complaint from the US Treasury about its failure to take the level of action required.

A letter to the international financial institution headed by Trump appointee David Malpass, seen by the Financial Times, says progress had been made to meet Treasury secretary Janet Yellen’s requests but there remained “specific gaps and room for increased climate ambition”.

It also urges more “forceful and constructive leadership”. A US Treasury official said that while it “appreciated” the steps taken by the World Bank to advance climate ambitions over 2021, it had “continued to make clear” its position about the the bank falling short on its climate ambition.

The US is the largest World Bank Group shareholder, and the only member nation that has a veto power over certain changes in the bank’s structure.

The bank provides loans and grants to poorer countries and is seen as critical in distributing money to the developing world to help limit global warming as those economies grow.

It has been increasingly criticised by the UN as well as climate experts for failing to align its funding activities with the ideal Paris agreement goal of keeping global warming to 1.5C since the 1800s.

The US Treasury letter to World Bank senior management includes a series of requests about avoiding the financing of fossil fuel projects, in particular to help developing countries shift away from coal.

The World Bank chose not to join the numerous countries and development banks that pledged at COP26 to end public financing for coal, oil and gas internationally this year, and the group’s climate plan does not include a deadline for phasing out direct and indirect fossil fuel financing.

The letter also asks that the institution “only support gas investments in limited circumstances” and where there are “no other credible options”.

Treasury officials have also made clear in meetings with civil society organisations that they are dissatisfied with the climate policies of multilateral development banks, and the World Bank in particular, according to a person familiar with the meetings.

In an email to several non-profit organisations, a Treasury official said the department had been “pressing [World Bank] management to be more ambitious and proactive in a number of areas” such as “exercising greater [climate] leadership” and on the transition to clean energy.

Under Malpass, the bank’s commitment to tackling climate change was criticised by UN special adviser Selwin Hart, who lambasted it at COP26 for being “an ongoing underperformer”. Former US president and climate expert Al Gore has described the bank as “missing in action”.

The financial institution pushed for the joint statement by development banks at last year’s UN COP26 climate summit to be shortened and weakened, according to people with knowledge of the talks.

The bank’s red tape has also made it difficult for developing countries to access financing related to climate change, say its critics.

The letter from the US Treasury asks the bank to “significantly increase” funds available for climate adaptation and resilience. It also requests that the bank set “clear, specific and ambitious” targets for mobilising climate sector finance.

Yellen had also convened the heads of other multilateral development banks in 2021 to discuss their climate ambitions, a Treasury official said.

Egypt’s finance minister recently told the FT that he believed multilateral development banks, such as the World Bank, were “not providing enough support on climate change, on financing”.

“I would like to see better terms and better conditions and lower costs,” Mohamed Maait said. Conditions, such as the obligation on recipients to extensively monitor and report on the use of the money, created a substantial burden on countries with limited resources, he added.

In response to the US Treasury letter, the World Bank Group said it was “committed to helping countries meet the goals of the Paris Agreement” and had “stepped up our [climate] financing”.

“We will continue to work with client countries and international partners to support the transition to low-carbon, resilient growth, particularly for the poorest and most vulnerable countries,” the group said.