US strives to forge Taliban power-sharing deal in Afghanistan 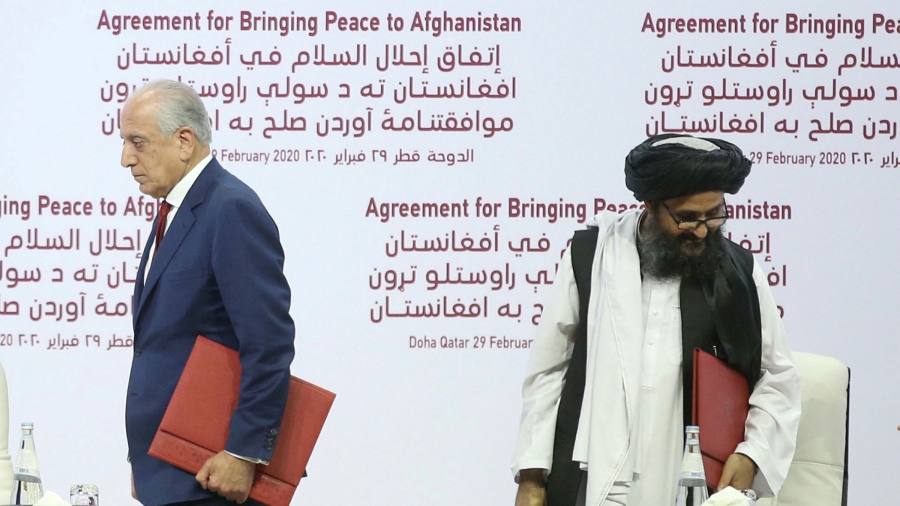 As Joe Biden seeks to bring America’s longest-running war to a close, a longtime Republican is leading the US president’s efforts to shepherd a peace settlement in Afghanistan that would put the Taliban into government.

Zalmay Khalilzad, Donald Trump’s former envoy to Afghanistan, is spearheading renewed US talks following a deal he struck on behalf of Washington with the Taliban last year. This month Washington proposed a conference of Afghan and Taliban leaders to move towards an interim power-sharing government.

At stake is whether the Biden administration will keep to a May 1 deadline to pull out the remaining 2,500 US troops who are officially still stationed in Afghanistan, and deliver on Biden’s promise to end the so-called forever wars.

Afghanistan-born Khalilzad is known as a well-connected geostrategist who has worked on the region for four decades, including as US ambassador to Afghanistan under George W Bush. But Biden’s special representative for Afghanistan reconciliation has also drawn criticism in Kabul for giving short shrift to the civilian government that Washington spent almost two decades fighting a war — and an estimated $1tn — trying to support.

Khalilzad’s efforts are a “last-ditch attempt to try and salvage something after a very non-productive year of negotiations since the deal was signed”, said Ahmed Rashid, author of books on Afghanistan, Pakistan and the Taliban, of the US envoy’s new aim to broker a power-sharing agreement.

“The Taliban have a great habit and great skill at playing one neighbouring state off another,” he said, adding that co-ordinating an international consensus would be crucial for any chance of success.

US withdrawal risks the collapse of civilian rule in Afghanistan and the prospect of takeover by the Taliban, which has vowed not to co-operate with al-Qaeda and other groups that threaten US security in exchange for troop withdrawals. If the US stays, it could be targeted by the Taliban or al-Qaeda once more.

As US vice-president, Biden opposed troop increases during Barack Obama’s administration that pushed the number of American forces above 100,000. The Biden administration has yet to decide whether it will withdraw after May 1, but Washington’s foreign policy elite has begun to lay the groundwork for a temporary extension or even a lasting presence.

Khalilzad tweeted that the Afghan government and the Taliban “must find a path to a political settlement and a permanent and comprehensive ceasefire” following his talks in Kabul this month.

Turkey has offered to host talks next month and Russia, which has lent support for a government that includes the Taliban, will also host talks later this week that Khalilzad will attend. Khalilzad may prove crucial to such efforts. “He knows the faults of both sides, he knows the personalities involved,” said Rashid, who has known him since the 1980s. “He’s got longevity.”

Washington has made clear one of its chief interests is ending the threat of attacks from al-Qaeda and others on US soil, but sees lasting political settlement in Kabul as central to the task — elusive twin goals.

“The feeling is, and this been expressed in the negotiations I believe, that [the Taliban] haven’t sufficiently separated themselves from al-Qaeda and that there hasn’t been the diminished levels of violence that were expected to flow from the agreement,” said James Dobbins, former US special envoy to Afghanistan for whom Khalilzad used to work.

But crafting a deal to fuse the Taliban’s Islamist ideology with civilian democratic rule may prove impossible to reconcile, especially over durable national security arrangements and the rights of women, which have seen gains since the US overthrew Taliban rule in 2001.

Michael O’Hanlon, who was among several senior advisers to a bipartisan Washington report that last month recommended extending the May 1 deadline, described Khalilzad as “master tactician and lubricator and facilitator”, but said he had not “seen it as his job . . . to drive the substantive debate about power-sharing, and what it really looks like”.

Madiha Afzal at the Brookings Institution said last month any Taliban takeover would risk massive repercussions, including a strengthened al-Qaeda and a major setback for Afghan women’s rights and democracy. Afghan officials have argued US withdrawal could unleash the threat of al-Qaeda around the world.

Khalilzad, who was also US ambassador to Iraq and the UN under George W Bush, is no stranger to policy setbacks. He secured Kabul government support for his plan to reach out to the Taliban in 2005, travelling to outlying provinces to encourage insurgents to join a political process, but failed to deliver reconciliation. He blamed what he said was Pakistan’s “double game” and its hold over the Taliban, but he also felt repeatedly let down by his own capital.

“The United States fell far short of its aspirations in Afghanistan and Iraq — a reality that weighs deeply on me,” he wrote in his 2016 memoir The Envoy.

Khalilzad has begun pressing Pakistan to influence the Taliban in Afghanistan to abide by the terms of the peace agreement, a senior Pakistan government official told the FT. “The Americans want Pakistan to help keep the Taliban on the table,” the official said.

Dobbins, who has authored multiple papers with Khalilzad, said the US faced undesirable outcomes on all sides and that any time-bound commitment to withdraw US troops unrelated to progress in negotiations was “flawed”.

But Farkhonda Akbari, an Afghan academic at the Australian National University, said no one in Kabul had believed Khalilzad could pull off a serious peace process since talks first started in October 2018.

“I think the new plan is pulling a rabbit out of the hat,” she said. “If someone believes in magic this is it.”