US signals tough stance ahead of first meeting with China 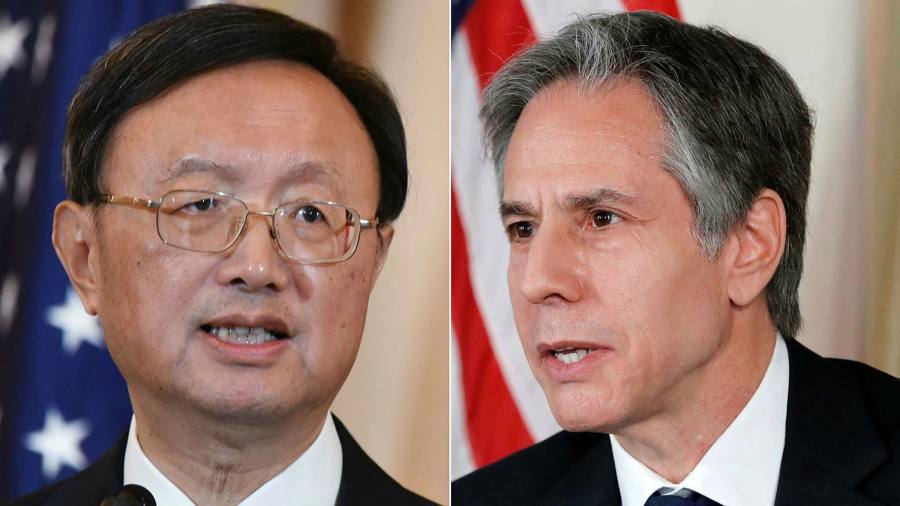 When the US imposed sanctions on Chinese officials this week, just two days before the first meeting between the Biden administration and China, it sent a signal that the encounter in Alaska on Thursday will not result in a thaw in relations between Washington and Beijing.

But in a strong signal before the meeting, Washington imposed sanctions on 24 Chinese and Hong Kong officials over a new Chinese law that further erodes democracy in Hong Kong. China described the move as a “vicious attempt” by the US to interfere in its affairs.

The sanctions reinforced the tough stance that Biden has taken towards China and solidified the view that he will not push for the “reset” in relations that Chinese officials have suggested they want.

In recent speeches, Yang and Wang blamed the state of relations on the US, but held out hope for improvement after four volatile years during Donald Trump’s administration. But they also warned the US not to cross “red lines”.

We’re not going back to the days of the ‘strategic and economic dialogue’ . . . which brings to mind the notion of a G2 where the US and China partner together and the US priority is to engage China,

Biden, Blinken and Sullivan have ignored those warnings and made clear that the US will not pull its punches over China’s policy towards Hong Kong, its human rights abuses in the northwestern Xinjiang region and its aggressive military activity in the air and waters surrounding Taiwan.

Evan Medeiros, an Asia expert at Georgetown University in Washington, said there was a “significant mismatch” between the two sides, adding that the meeting will “neither melt nor break the ice”.

“Beijing wants a reset and to avoid the confrontation of the Trump years, but doesn’t want to do much to achieve it,” Medeiros said. “Biden officials have a long list of concerns about China’s assertive behaviour.”

One US official said there would be a “very frank conversation” in Alaska. A second official added the Biden administration wanted to make sure China was under no illusions that it would not hold back on issues such as the crack down on the pro-democracy movement in Hong Kong or the repression of Muslim Uyghurs in Xinjiang.

“Sometimes there is a sense . . . in Beijing that our public message is somehow different than our private message,” the second official said. “And we think it’s really important that we dispel that idea.”

Speaking in Japan ahead of the Alaska meeting, Blinken said the US would “push back if necessary when China uses coercion or aggression”. At the same time, the US says it will engage on issues such as climate charge, but with a more sceptical view than in the past when Beijing talked about wanting to improve ties with Washington.

“We’re going to be looking at deeds, not words,” said the first official, who added that the US had a “very clear-eyed view about the People’s Republic of China’s pretty poor track record of keeping its promises”.

Underscoring the challenge to improving relations, Kurt Campbell, the top White House Asia official, this week warned China to stop its economic bullying of Australia, which started last year after Canberra called for an independent investigation into the origins of the Covid-19 pandemic.

“We have made clear that the US is not prepared to improve relations . . . at the same time that a close and dear ally is being subjected to . . . economic coercion,” Campbell told Australian newspapers The Sydney Morning Herald and The Age.

While the US has criticised China for economic coercion, Sullivan last week said trade would not be a major subject in Alaska. Biden has signalled that he does not plan to remove the tariffs that Trump slapped on imports from China for now, partly because it would remove some of his administration’s leverage over Beijing.

China has couched the Alaska meeting as a “strategic dialogue”, but US officials and experts say it does not signal a return to an era where there was some guarded optimism about China’s evolving global role.

Elizabeth Economy from the Hoover Institution at Stanford University in California said the meeting was more an opportunity for the Biden team to stress that its foreign policy would be grounded in values, alliances and institutions.

“We’re not going back to the days of the ‘strategic and economic dialogue’ . . . which brings to mind the notion of a G2 where the US and China partner together and the US priority is to engage China,” Economy said.

The US speaks tough and acts tough. China will act tough as well

Jonathan Ward, author of China’s Vision of Victory, added that Blinken and Sullivan should make clear that Washington was not seeking a “grand bargain” or a “new model of great power relations”. He suggested that they “send the Chinese Communist party officials home with the understanding that CCP deceptions won’t work any more”.

Chinese officials and experts have equally low expectations for the Alaska meeting, particularly after the US imposed the Hong Kong-related sanctions and following other criticism from the Biden team over the past two months over everything from the situation in Xinjiang to Taiwan.

“This meeting is more about both sides testing each other’s bottom lines,” said Lü Xiang, a US expert at the Chinese Academy of Social Sciences in Beijing, who added that China put a priority on non-interference in its internal affairs.

“The fundamental issue is whether the US is willing to co-operate with China and other countries in designing international rules or insists on its own rules for the international community,” Lü added.

Shi Yinhong, a foreign policy expert at Beijing’s Renmin University who advises the government, also downplayed expectations of a breakthrough. “Any agreements will be insignificant compared with the overall confrontation,” he said. “The US speaks tough and acts tough. China will act tough as well.”

Edinburgh zoo pandas: Pair to stay in Scotland for another two years