US promises new aid to Ukraine in fight against Russia 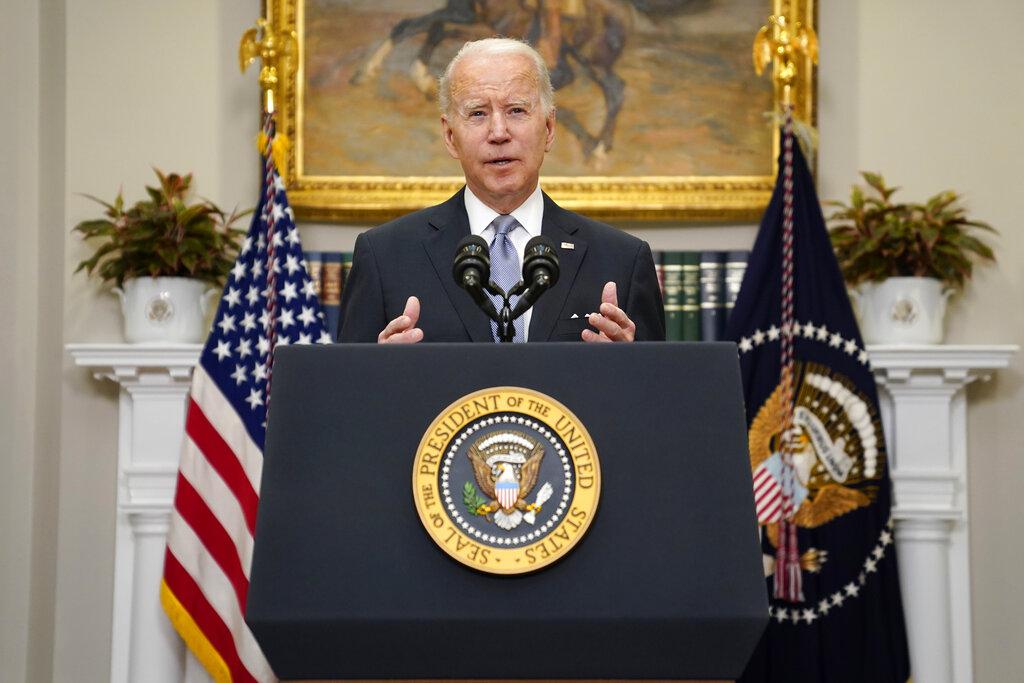 President Joe Biden delivers remarks on the Russian invasion of Ukraine, in the Roosevelt Room of the White House, Thursday, April 21, 2022, in Washington.

In meetings with Zelenskyy in Kyiv, U.S. Secretary of State Antony Blinken and U.S. Defense Secretary Lloyd Austin said the United States had approved a $165 million sale of ammunition for Ukraine’s war effort, along with more than $300 million in foreign military financing.

The pledges came Sunday, the 60th day since the start of the invasion, as Ukraine pressed the West for more powerful weapons against Russia’s campaign in the Donbas region of eastern Ukraine, where Moscow’s forces sought to dislodge the last Ukrainian troops in the battered port of Mariupol.

On the diplomatic front, U.N. Secretary-General Antonio Guterres was scheduled to travel to Turkey on Monday and then Moscow and Kyiv. Zelenskyy said it was a mistake for Guterres to visit Russia before Ukraine.

“Why? To hand over signals from Russia? What should we look for?” Zelenskyy said Saturday. “There are no corpses scattered on the Kutuzovsky Prospect,” he said, referring to one of Moscow’s main avenues.

In a boost in support for Ukraine, French President Emmanuel Macron comfortably won a second term Sunday over far-right challenger Marine Le Pen, who had pledged to dilute France’s ties with the European Union and NATO. Le Pen had also spoken out against EU sanctions on Russian energy and had faced scrutiny during the campaign over her previous friendliness with the Kremlin.

Macron’s victory was hailed by France’s allies in the EU as a reassuring sign of stability and continued support for Ukraine. France has played a leading role in international efforts to punish Russia with sanctions and is supplying weapons systems to Ukraine.

“We have a lot to do and the war in Ukraine reminds us that we are going through tragic times where France must make its voice heard,” Macron told a cheering crowd in his victory speech.

Zelenskyy’s meeting with U.S. officials, his first face-to-face talks with a top American official since a Feb. 19 meeting in Munich with Vice President Kamala Harris, took place as Ukrainians and Russians observed Orthodox Easter. Speaking from Kyiv’s ancient St. Sophia Cathedral, Zelenskyy, who is Jewish, highlighted its significance to a nation wracked by nearly two months of war.

To Ukraine’s north on the Russian side of the border, a fire erupted early Monday at an oil depot, but Russia’s Tass news agency gave no immediate cause for the blaze in oil storage tanks.

NASA satellites that track fires showed something burning at coordinates that corresponded to a Rosneft facility some 110 kilometers (70 miles) north of the Ukrainian border. Moscow previously has blamed Ukraine for attacks on the Russian region of Bryansk, which borders Ukraine.

Since failing to capture Kyiv, the Russians have aimed to gain full control over the Donbas, the eastern industrial heartland, where Moscow-backed separatists controlled some territory before the war.

For the Donbas offensive, Russia has reassembled troops who fought around Kyiv and in northern Ukraine. The British Ministry of Defense said Ukrainian forces had repelled numerous assaults in the past week and “inflicted significant cost on Russian forces.”

In the south of the Donbas, in the strategic port city of Mariupol, a small pocket of Ukrainian troops continues to hold out against Russian forces in the Azovstal steel factory, a sprawling facility on the waterfront.

Mariupol has endured fierce fighting since the start of the war because of its location on the Sea of Azov. Its capture would deprive Ukraine of a vital port, free up Russian troops to fight elsewhere, and allow Moscow to establish a land corridor to the Crimean Peninsula, which it seized from Ukraine in 2014.

Over the weekend, Russian forces launched fresh airstrikes on the steel plant in an attempt to dislodge the estimated 2,000 fighters inside. An estimated 1,000 civilians are also sheltering in the building.

New satellite images by Planet Labs PBC, taken Sunday, show destroyed buildings across the steelworks and smoke rising from one part of the facility. Roofs have gaping holes; a soccer field is cratered from incoming fire.

More than 100,000 people — down from a prewar population of about 430,000 — are believed to remain in Mariupol with scant food, water or heat. Ukrainian authorities estimate more than 20,000 civilians have been killed. Recent satellite images showed what appeared to be mass graves to the west and east of Mariupol.

Children in an underground bunker were seen receiving Easter presents in a video released Sunday by the far-right Azov Battalion, which is among the Ukrainian forces at the steel plant in Mariupol. The group’s deputy commander, Sviatoslav Palamar, said the video was shot at the plant.

One toddler is seen wearing homemade diapers made of cellophane and people are seen hanging laundry on makeshift hangers.

“Please help us,” one woman in the video said through tears, appealing to world leaders. “We want to live in our city, in our country. We are tired of these bombings, constant air strikes on our land. How much longer will this continue?”

Biden says ‘we have to act’ after Texas school shooting