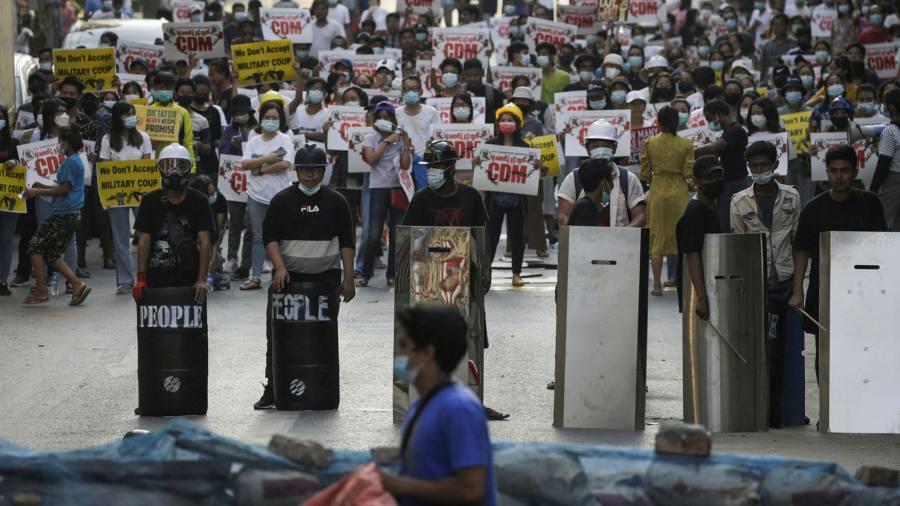 The Biden administration has announced another package of sanctions intended to squeeze the finances of Myanmar’s military junta as it seeks to strengthen its response to last month’s coup.

The measures come on top of penalties announced by the Biden team last month targeting General Min Aung Hlaing, the country’s commander-in-chief, and other military leaders, as well as three mining and gemstone companies.

The US Treasury said in a statement on Wednesday it was imposing sanctions on two of Min Aung Hlaing’s adult children — Aung Pyae Sone and Khin Thiri Thet Mon — and six companies they own or control.

US secretary of state Antony Blinken said the US would continue to work with a broad coalition of international partners to promote accountability for the coup’s leaders, those responsible for the violence and those who benefit financially from the regime.

You’ve got to do something to show the junta there’s not just a domestic consequence, but major international consequences too

“We will not hesitate to take further action against those who instigate violence and suppress the will of the people,” he said in a statement.

But they fell short of stronger measures sought by activists to deprive the junta of crucial revenues, including potential sanctions against Myanmar Oil and Gas Enterprise, the state energy company.

After the first round of penalties was announced, officials from the US state and Treasury departments as well as the National Security Council discussed options to accelerate efforts to cut off financial flows to the coup’s military leaders as conditions in the country worsened, said three people briefed on the matter.

The US government has considered additional measures, including targeting state-owned enterprises or their subsidiaries, as part of its promise to put human rights and the rule of law at the heart of its foreign policy, said the people briefed.

The US commerce department has already added MEHL and MEC to a trade blacklist, and last week said it was “reviewing potential additional measures as warranted by the military’s actions”.

Campaigners have pressed the administration for sanctions against MOGE to freeze or redirect payments due from partners in some of its natural gas projects, which include Total and Chevron. Thomas Andrews, the UN’s human rights investigator on Myanmar, has backed calls for sanctions on MOGE.

Myanmar earns close to $1bn a year from foreign sales of gas, its second-largest export industry after manufacturing.

Human rights organisations, including Justice for Myanmar, a non-governmental group focused on the country’s military-linked businesses, have appealed for dividend payments to MOGE to be withheld because it is in the junta’s hands.

The sanctions deliberations came as Myanmar’s military attempts to violently suppress a nationwide civil disobedience movement, with people across the country taking part in protests and work stoppages.

The regime has killed at least 60 people, mostly shooting deaths, and imprisoned almost 2,000, including the country’s leader Aung San Suu Kyi and president Win Myint, since the February 1 coup. The UK and Canada have also imposed sanctions on junta officials, and Australia and New Zealand have cut back their ties with the military.

John Sifton, Asia advocacy director at Human Rights Watch, welcomed the measures but said that imposing sanctions against the military itself would be “even more effective”. The Biden administration “should be focusing more on ongoing revenue,” he said.

“The junta is shooting protesters on the streets . . . You’ve got to do something to show the junta there’s not just a domestic consequence, but major international consequences too.”

Min Aung Hlaing, Myanmar’s junta chief, has sought to encourage business and investment as usual, but the upheaval that followed the coup, including strikes targeting the banking system and transport, have started to hurt the country’s economy.