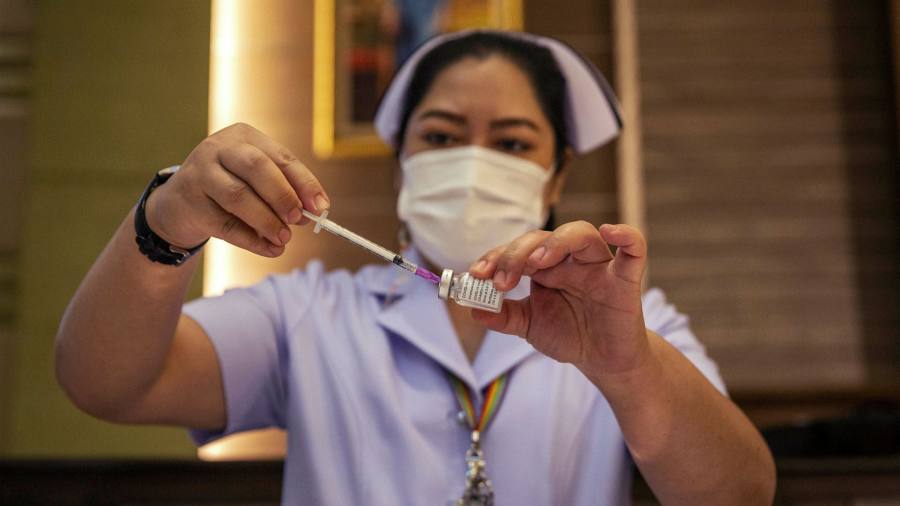 The US has crafted a plan with Japan, India and Australia to provide 1bn doses of Johnson & Johnson’s Covid-19 vaccine to south-east Asian nations in an effort to counter Chinese influence in the Indo-Pacific region.

President Joe Biden and his three counterparts announced the initiative on Friday after they convened the first “Quad” summit. Under the deal, the US and Japan will finance production of the vaccine in India, while Australia will help to distribute the jabs across south-east Asia.

Jake Sullivan, US national security adviser, said the four countries had “taken the Quad to a new level” with the agreement to distribute vaccines and work on other issues such as emerging technologies and climate change.

“Today is a big day for American diplomacy. This summit is a big deal for the president and for the country,” Sullivan added.

The Quad emerged in 2004 when the countries co-operated on disaster relief after a tsunami devastated Indonesia. The vaccine plan came together after weeks of shuttle diplomacy between Kurt Campbell, the top White House official for the Indo-Pacific, and the Quad’s ambassadors in Washington. The Financial Times was the first to report that the four countries were working on a vaccine diplomacy initiative.

The vaccine diplomacy is the first part of a broad strategy to find common areas where the countries can counter Beijing without appearing too anti-China.

“The four leaders did discuss the challenge posed by China, and they made clear that none of them have any illusions about China, but today was not fundamentally about China,” Sullivan said after the summit.

Harsh Vardhan Shringla, India’s foreign secretary, stressed that the Quad was a “constructive, positive agenda,” rebuffing suggestions that it was a check on Chinese power.

“We have always said that the Quad does not stand against something, it stands for something,” he said. “It stands for doing something in the realm of consideration for others.”

Biden has made clear that he sees China as his biggest foreign policy challenge and that he will seek to work with allies to deal with Beijing. The Quad meeting was his first summit as president. Next month, he will meet Yoshihide Suga in Washington, making the Japanese prime minister the first foreign leader to visit Biden at the White House.

Since holding its first “Quadrilateral Security Dialogue” in 2007, the Quad had fallen dormant, particularly over concerns in India and Australia about antagonising China.

Michael Green, former Asia adviser to George W Bush, said Biden had to “reset the chessboard quickly” to deal with China, but warned that the US president faced constraints over a lack of consensus on trade policy and debates about levels of military spending.

He said the Munich Security Conference, at which German chancellor Angela Merkel and French president Emmanuel Macron adopted softer approaches to China, reinforced the view that the “Europeans were still obstreperous” about crafting a common China policy.

“This was the fastest play on the board and they did it big,” Green said. “The provision of public goods is not something that China can call containment, but it shows the limits of Beijing’s influence.”

One US official said Biden wanted to make the Quad more central to US policy in the Indo-Pacific.

He said the vaccine effort was a critical test of whether the Quad would be strategically important. “The thing that has brought all these countries together is an insistence on providing practical concrete help. If the Quad cannot constructively address these issues, we will quickly lose relevance.”

Tanvi Madan, an India expert at the Brookings Institution, said the plan showed that the Quad could make a positive contribution that would help alleviate doubts about its effectiveness.

“It can be visible proof of concept for a grouping that has been dismissed by critics as . . . a meaningless talk shop,” she added.

Hugh White, professor of strategic studies at Australian National University in Canberra, said Biden’s decision to elevate the Quad to the head-of-government level was “an important sign of the high priority he gives to responding to China’s challenge”.

Video: What does a Biden presidency mean for China?