US aims to lead by example as countries pledge climate action 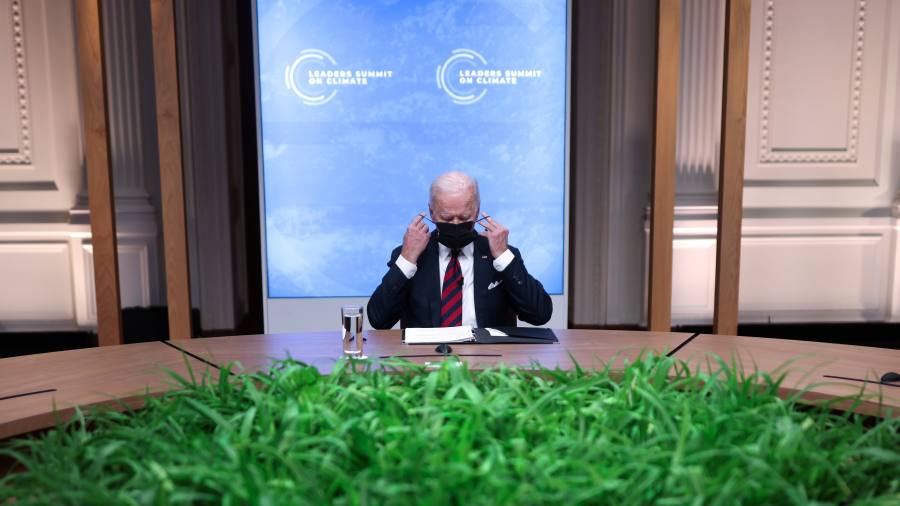 The US has vowed to cut its carbon emissions in half by the end of this decade, as President Joe Biden promised the new targets would help create jobs and maintain American competitiveness.

In a late-night press briefing by Beijing officials after Xi’s speech, however, it was noted that this would still allow China’s coal consumption to grow until 2026.

Su Wei, deputy secretary-general of China’s state planner, said coal was still needed to ensure a stable power supply. “We need a stable source of electricity and have no other options, so for a period we will need coal power” to supplement unstable renewable energy sources, he said.

The US-led summit on Earth Day, just three months after the US rejoined the Paris climate accord, is an attempt to re-establish US leadership on an issue that has been a central priority for the Biden administration.

“We are here at this summit to discuss how each of us, each country, can set higher climate ambitions that will in turn create good-paying jobs,” Biden told assembled leaders. “We have no choice, we have to get this done.”

Biden said the UN COP26 climate summit in Glasgow in November would be essential for addressing “the existential crisis of our time”.

The new US targets will lower its annual carbon emissions by 1.5bn-2.4bn tonnes of carbon dioxide equivalent by 2030 compared to its current trajectory, according to calculations from Climate Action Tracker.

Global annual carbon emissions will be about 33bn tonnes this year, according to the International Energy Agency.

South Korea pledged to stop financing coal projects overseas, which had been requested by John Kerry, the US climate envoy, during his visit there last weekend.

Yoshihide Suga, Japan’s prime minister, said his country would cut emissions by 46 per cent by the end of this decade, relative to 2013 levels.

However, Greta Thunberg, the Swedish climate activist, said the targets were “very insufficient” and full of loopholes.

“Let’s call out their bullshit,” the 18-year old Thunberg said in a video released on Twitter on the same day as Biden’s summit. “We are not so naive that we believe that anything will be solved by countries and companies making vague distant targets.”

Global temperatures have increased by more than 1C since 1850, and the UN COP26 climate summit later this year will try to get the world on track to limit that warming to 1.5C, the goal set by the Paris climate accord.

So far the pledges made under the 2015 Paris agreement, which was endorsed by 197 nations, are far off track from what would be necessary to hit the 1.5C goal, even including the new targets announced at the summit.

The UK, which is hosting COP26, urged other rich countries to give more money to climate finance, an issue that will be a key sticking point in Glasgow.

A successful summit would require “the richest nations coming together and exceeding the commitment they already made for $100bn [in annual climate finance]”, said Boris Johnson, UK prime minister.

Providing some moments of levity in the summit, Johnson said fighting climate change was not just about “bunny hugging” and was really an opportunity to create jobs.

The prime minister also touted the UK’s record of expanding its economy while shrinking its emissions. “Cake, have, eat, is my message to you,” he said.