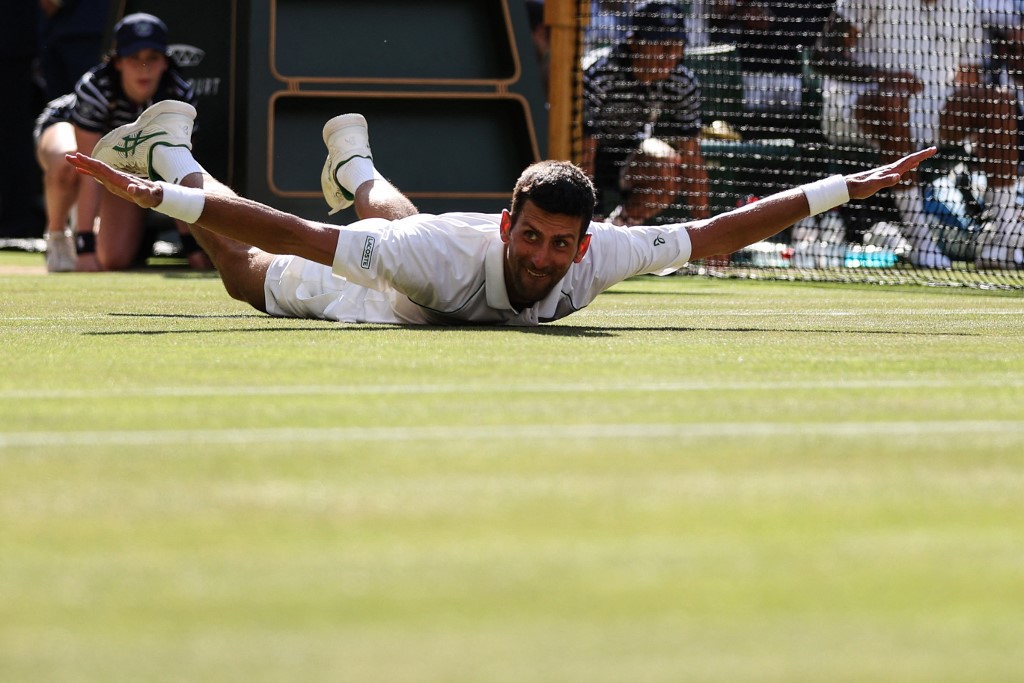 Serbia’s Novak Djokovic celebrayes beating Australia’s Nick Kyrgios during their men’s singles final tennis match on the fourteenth day of the 2022 Wimbledon Championships at The All England Tennis Club in Wimbledon, southwest London, on July 10, 2022. (Photo by Adrian DENNIS / AFP)

It appears Novak Djokovic won’t be getting a chance to match Rafael Nadal’s Grand Slam record at the US Open later this summer.

The unvaccinated Djokovic reiterated Sunday that he has no plans to receive the COVID-19 vaccination, which would rule him out of the U.S. Open unless restrictions to enter the United States are changed.

“I’m not vaccinated and I’m not planning to get vaccinated so the only good news I can have is them removing the mandated green vaccine card or whatever you call it to enter United States or exemption,” Djokovic said. “I don’t know. I don’t think exemption is realistically possible. If that is a possibility, I don’t know what exemption would be about.”

Djokovic missed the Australian Open at the start of the year due to his vaccination status. The Serbian was deported from Australia after losing his appeal to being initially ruled ineligible to enter the country.

The 35-year-old Djokovic played in the 2021 U.S. Open and lost in the final in straight sets to Daniil Medvedev of Russia.

Djokovic said he’s now entering a period of rest. With there being other U.S. tournaments prior to the U.S. Open, Djokovic acknowledged he may be waiting a while to play in his next tournament.

“Then I’ll wait hopefully for some good news from USA because I would really love to go there,” Djokovic said. “That would be probably the next big tournament, the next big swing, playing a tournament or two before U.S. Open and (playing in) U.S. Open. If that doesn’t happen, then I have to see what the schedule will look like.”

Meanwhile, former tennis great John McEnroe strongly stated that Djokovic should be allowed to play in the U.S. Open. McEnroe made his remarks during ESPN’s coverage on Sunday.

“These politicians are getting in the way too much. They did it in Australia,” McEnroe said after Djokovic’s victory. “Let’s let the guy come in and play in the U.S. I mean, come on, this is ridiculous.

“But I don’t make those decisions. I hope someone makes the right one and allows him to play. That’s my personal opinion.”

Despite winning Wimbledon, Djokovic will drop from No. 3 in the ATP rankings to No. 7 on Monday.

Since there were no points granted at Wimbledon this year due to the tournament’s ban on players from Russia and Belarus, Djokovic can only fall down the rankings due to the 52-week rolling scale.

So the 2,000 points he earned as the 2021 Wimbledon champion are no longer part of his ranking tally, hence the drop.