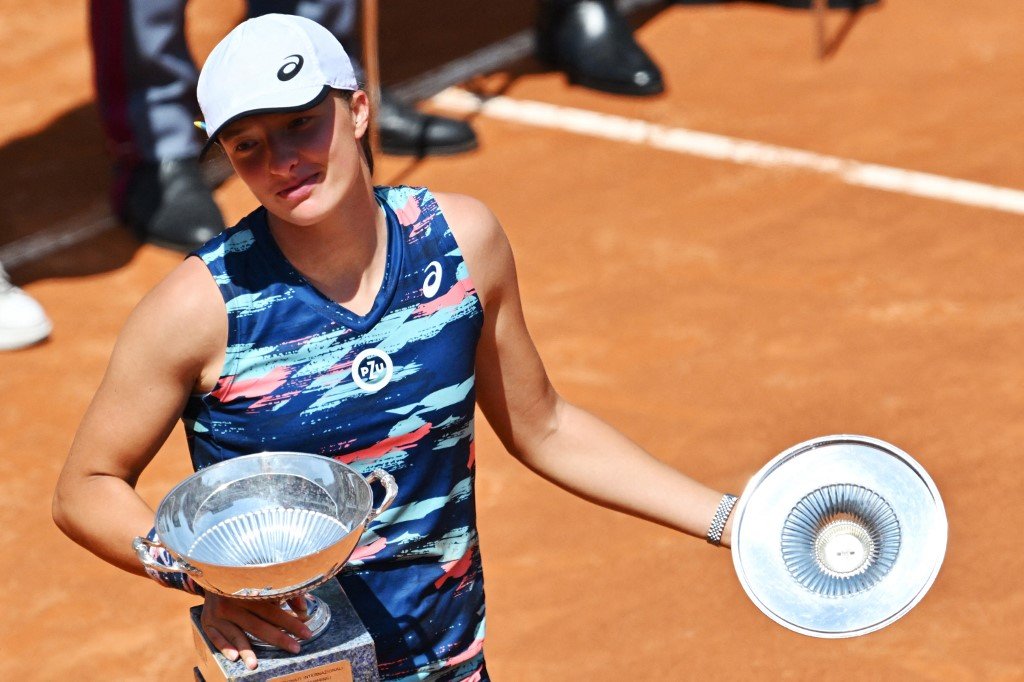 Poland’s Iga Swiatek holds the winner’s trophy after defeating Tunisia’s Ons Jabeur to win the final of the Women’s WTA Rome Open tennis tournament on May 15, 2022 at Foro Italico in Rome. (Photo by Andreas SOLARO / AFP)

Iga Swiatek is the undeniable favorite for a second French Open title after winning her past five tournaments but says she won’t be “heartbroken” if her 28-match unbeaten run comes to an end at Roland Garros.

Since the shock retirement of world number one Ashleigh Barty, the 20-year-old Swiatek has swept aside all-comers and transformed herself into the player to beat in women’s tennis.

The Pole hasn’t lost since falling to another former Roland Garros champion, Jelena Ostapenko, in Dubai in February. Her winning streak is the longest on the WTA tour since Serena Williams won 34 matches in a row in 2013.

“I’m aware that this streak is something that may be coming to an end soon, so I don’t want to be like heartbroken when it’s going to happen,” said Swiatek, the 2020 French Open winner.

“I think being aware of that is pretty healthy.

“I haven’t played a Grand Slam since the streak started. So I guess we’re going to see if everything I have been doing before is going to be enough.”

Swiatek became only the second player to win four WTA 1000 titles in a season after defending her Rome crown last week.

She dominated on the hard courts in Doha, Indian Wells and Miami, and made a seamless switch to clay — her triumph in Rome came after she skipped Madrid to rest following another victory in Stuttgart.

“The world has changed, for sure,” she said. “I feel like with my new ranking, people around are treating me a little bit differently.

“But I feel like I’m staying the same player and the same person.

Williams, who turns 41 in September, has not played since retiring in the first round at Wimbledon last year, and her long-time coach Patrick Mouratoglou is now working with two-time Grand Slam champion Simona Halep, who won her first major in Paris in 2018.

Unlike the men’s event where Rafael Nadal has won 13 of the past 17 editions, a first-time women’s Grand Slam champion has been crowned in each of the past six French Opens.

Most recently, Barbora Krejcikova emerged as an unlikely victor, the first player to win both the singles and doubles at Roland Garros since Mary Pierce in 2000.

However, the Czech world number two has been sidelined by an arm injury since late February and is yet to play on clay this year. Anastasia Pavlyuchenkova, runner-up in 2021, has already called time on her season due to a knee injury.

Third-ranked Paula Badosa reached the quarter-finals at Roland Garros a year ago, while Maria Sakkari was one point away against Krejcikova from becoming the first Greek woman to play in a Grand Slam final.

Aryna Sabalenka is showing signs of finding her best form after struggling to start the year, while 2019 US Open champion Bianca Andreescu has soared back into the top 75 following her latest battle with injury.

Tunisia’s Ons Jabeur, the first Arab or African player to capture a WTA 1000 title with her victory in Madrid, has dreams of replicating her 2011 junior triumph on the Parisian clay.

Jabeur, 27, has made three clay finals this season — losing to Belinda Bencic in Charleston and Swiatek in Rome — and arrives at the French Open at a career-high ranking of sixth.

All eyes will be on Naomi Osaka as the Japanese star returns to the scene of her dramatic 2021 withdrawal following the bitter fall-out from her media boycott.

Osaka subsequently sat out Wimbledon and later revealed her battle with depression and anxiety. The four-time Grand Slam champion made her comeback at the Tokyo Olympics, lighting the Olympic cauldron.

“I’m not going to lie. Like when I first came here, I was very worried,” the 24-year-old said as she attended the official French Open press day on Friday.

“I was just kind of worried that there were people that I offended some way and I would just kind of bump into them.

“Of course, I also didn’t like how I handled the situation.”

Osaka, the highest-paid female athlete in the world, has never gone beyond the third round at Roland Garros in five previous attempts.

She will start her campaign against 2019 semifinalist Amanda Anisimova who ended her Australian Open defense in January.