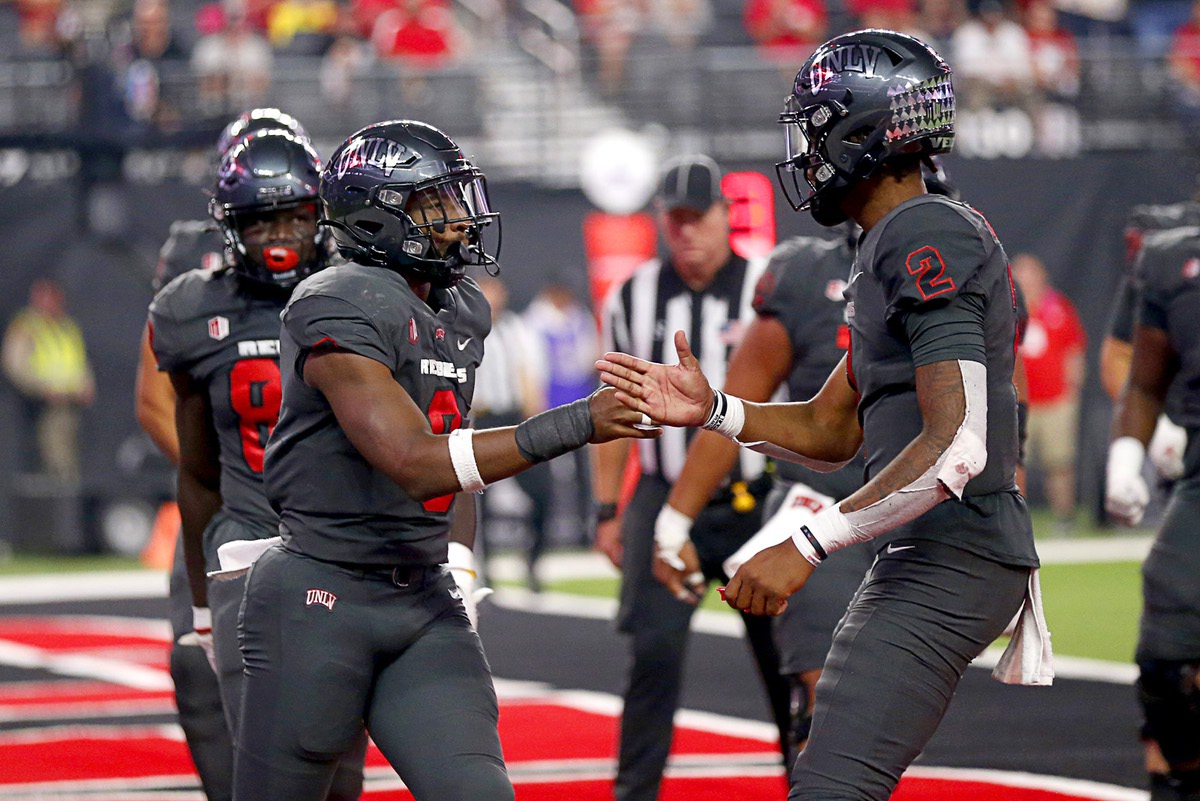 UNLV Rebels running back Aidan Robbins, left, is congratulated by quarterback Doug Brumfield (2) after scoring a touchdown against the New Mexico Lobos during the second half of an NCAA football game at Allegiant Stadium Friday, Sept. 30, 2022.

The coach’s comments proved prescient on Friday, when visiting New Mexico threw the kitchen sink at the Scarlet and Gray, forcing Arroyo’s squad to dig deep in a 31-20 comeback win at Allegiant Stadium.

UNLV is now 4-1 on the season and 2-0 in Mountain West play, a stunning turnaround for a program that had gone 2-16 in the previous two years.

“That’s such a huge deal for our group,” Arroyo said. “A character-building win. That’s the bottom line.”

Arroyo’s crew took the long way to get there on Friday. New Mexico came in as a two-touchdown underdog, but as Arroyo predicted, they got up for the game and caught UNLV flat-footed in the early going. Touchdown drives on the first two possessions and a field goal early in the second quarter gave the visitors a commanding 17-0 lead.

UNLV got it all back, but it wasn’t a pretty rally. UNLV kicked field goals on three straight possessions to pull within 17-9 at halftime, and Doug Brumfield capped off a 76-yard drive with a 6-yard touchdown run midway through the third quarter to make it 17-15. His 2-point pass was hauled in by Ricky White to erase the deficit completely.

UNLV’s next possession turned into another long march, with Brumfield taking the offense 80 yards for another touchdown, this one courtesy of an Aidan Robbins 3-yard run.

That gave UNLV its first lead of the night, 24-17, with 14:29 remaining in the fourth quarter, and the defense closed it out from there. New Mexico had five possessions in the fourth quarter with an opportunity to tie or take the lead, and UNLV held the Lobos to a single field goal.

With 53 seconds on the clock, UNLV cornerback Cameron Oliver picked off a Miles Kendrick fourth-down pass and returned it 21 yards for a touchdown to seal the win.

Brumfield delivered a workmanlike 233 passing yards on 24-of-33 attempts while mostly targeting lesser-used receivers. With Kyle Williams and Jeff Weimer both out due to injury, Brumfield spread the ball around to seven different receivers, including five completions to junior Senika McKie (72 yards) and four to sophomore Kalvin Souders (57 yards).

Those were the first four catches of Souders’ career, but Brumfield trusted his guys, threw the ball with confidence and did enough to put his team in the win column for the fourth time this season.

“We know what we need to do,” Brumfield said of shutting the door on New Mexico. “We know we need to go out there and execute, how to adjust and what to expect from other teams.”

Brumfield almost didn’t get a chance to finish the game. Midway through the fourth quarter, the lanky lefty scrambled toward the UNLV sideline and took a big hit from New Mexico linebacker Cody Moon as he stepped out of bounds.

The late hit flattened Brumfield and drew a flag for unnecessary roughness. Moon then got into a shouting match with players on the UNLV sideline; Arroyo stepped in, getting face to face with Moon until referees intervened and sanity prevailed.

Brumfield lingered on the ground for a moment, but Arroyo said the team’s doctors cleared him to reenter the game without missing a play.

“I didn’t really see,” Arroyo said when asked how the staff handled Brumfield on the sideline. “Obviously our doctors were on him right away. They came right up to me right afterward, we got everyone separated and calmed down, and [the doctors] relayed we were ready to go.”

Brumfield said he did not feel any concussion symptoms.

As long as Brumfield is upright, this UNLV team is something to watch. The Scarlet and Gray are now, amazingly, just two victories shy of qualifying for a bowl game.

UNLV will head to San Jose State next week for a Friday road game, looking to move one win closer to postseason eligibility.