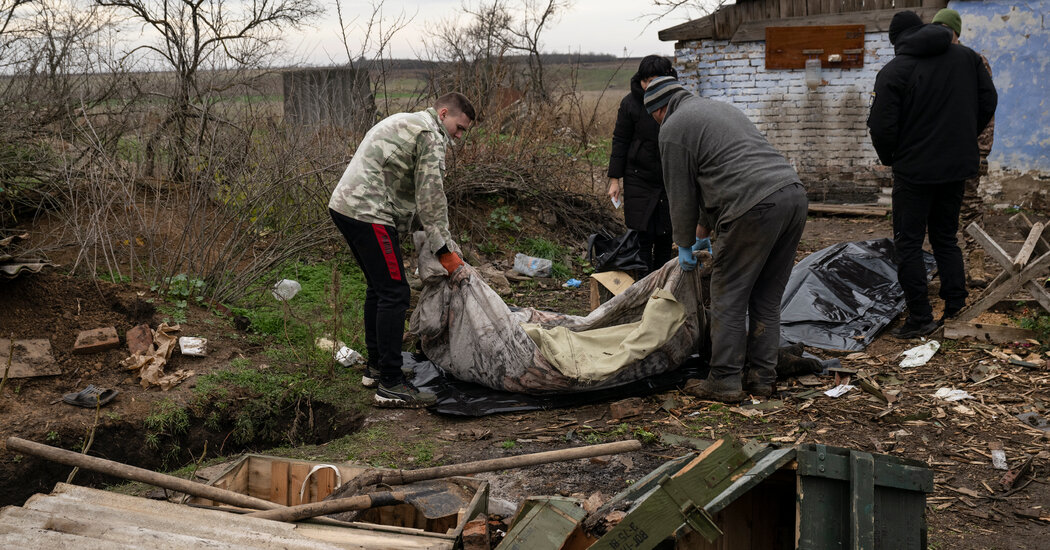 LVIVSKY OTRUBI, Ukraine — After Russian forces retreated from the southern port city of Kherson, Serhiy Novosad, 26, returned this week to the small village of Lvivsky Otrubi where he had grown up, looking for his father and grandmother.

On arriving at the family home, the first thing he noticed were his father’s shoes sitting in a narrow trench dug into the front yard of a house across the street. But before he could look more closely at what he feared was a crime scene, he would have to wait 10 long days — first for the deminers, and then for the police.

As the Russians’ fortunes in Kherson sagged in recent months, their occupation tactics turned increasingly savage, and Mr. Novosad had begged his father and grandmother to leave their village and join him in Kyiv. But his father, also named Serhiy Novosad, would have none of it. He was a farmer and had to tend to his field, he said. City life was not for him.

The two men stayed in touch up until the final days of the Russian occupation, having guarded cellphone conversations because they assumed the Russians would be listening in.

But on Nov. 10, with Russia in the final stages of its retreat, his father’s phone stopped working, and Mr. Novosad decided to make the three-day journey from Kyiv to the Kherson area, still a war zone where Russian shelling killed 10 people on Friday.

When he got to his family home, he found Ukrainian soldiers living there. He asked them where his father was. They shrugged their shoulders, and pointed to what appeared to be a makeshift grave with a cross in front of the house directly across the street.

The Russians had used the family’s house as a base of sorts, and all around were discarded Russian uniforms and boots, dozens of empty ammunition crates, obscene graffiti scribbled on the walls, half-eaten hot dogs and tinned meat.

And the threat of mines.

The scale of the mining around Kherson is hard to comprehend, Rostyslav Smirnov, an adviser to the Ukrainian interior minister, said on Friday. While more than 5,000 mines have been disposed of, he said, they remain everywhere, including in children’s toys. “There was a mine between two soccer balls,” he said.

Using a hook at the end of a long shaft, the sappers carefully removed the wooden cross in case it was rigged. That cleared the way for the overburdened police, who did not arrive until this Wednesday.

As the police officers started to clear dirt from the shallow grave, Mr. Novosad recognized his father’s feet. He also spotted his grandmother’s cane. The bloodied, bruised and bullet-riddled bodies, covered only by an inch-thick layer of dirt and some corrugated metal sheets, made it clear that Serhiy Novosad, 49, and his mother, Lyubov Novosad, 78, had met a violent end.

Andriy Kovalenko, a prosecutor in the Kherson regional prosecutor’s office, said their deaths would be added to the more than 6,000 criminal cases opened in and around Kherson city since the start of the war — until now, most of them based on testimony from people who had fled the area.

The task for prosecutors is daunting, and they are now working under daily Russian shelling in places with no power and unreliable communication networks.

When the Russians were driven out of the Kyiv region early in the war, there was no time to hide evidence of atrocities, and the bodies of civilians shot by Russian forces littered the streets. After Russian forces were routed from the northeastern region of Kharkiv, Ukrainian prosecutors and independent journalists moved quickly to document mass graves, torture rooms and other evidence of atrocities.

But the Russian retreat from Kherson to the other side of the Dnipro River played out over weeks, leaving time for Russian soldiers to systematically loot the city and, according to Ukrainian officials, cover up evidence of war crimes.

Only now, with the Russians having withdrawn from the area, is it possible to independently investigate allegations of atrocities, including torture, kidnapping, murder and sexual violence.

But that work is complicated by the fact that Russian forces now across the river are stepping up their shelling of Kherson city and the surrounding towns and villages. And many of the claims from witnesses date back months, with some like the account of Liubov Yavorskaya, 54, currently impossible to verify.

Ms. Yavorskaya lives near a garbage dump on the outskirts of Kherson that is now littered with the detritus of war. There are tattered Russian and Ukrainian uniforms, battered combat helmets and a gas mask scattered in a sea of refuse. But hidden deep below the trash, she fears, are the charred remains of bodies burned by Russian soldiers during the course of their nearly nine-month occupation.

“It stank of corpses,” said Ms. Yavorskaya, 54, who said there was no mistaking the wretched odor. “Every day I walk this way to work and I am sure of it. I know every smell: burned chicken, burned rags. This smell was different,” she said. It was the smell of burned human flesh.

She could not say whose bodies were being immolated, and the area around the dump had been cordoned off by Ukrainian security earlier in the week. But a New York Times photographer saw about a dozen empty barrels of fuel and heaps of fresh garbage on top of older garbage.

Ms. Yavorskaya said she first noticed the strange smells in the summer. “This happened when it was hot: in June, July and August,” she said. “The smoke was different, the smell was different.”

Her account matches those of other residents living near the dump and coincides with reports from Ukrainian military intelligence this summer that Russia was using burn pits not for the bodies of civilians but to cremate the remains of its soldiers in Kherson to hide the true toll of its losses.

“On the outskirts of the city, places with a large number of charred remains of people have been noticed more than once,” the Ukrainian intelligence agency S.B.U. said in a report released in July.

Ukrainian prosecutors and intelligence officials said they were aware of reports that Russians burned their own war dead. But with so many war crimes allegations to investigate, they said, determining the veracity of such reports is not a priority.

As for Mr. Novosad, he is grateful that, unlike so many others in Ukraine, he at least knows the fate of his father and grandmother. He says he will give them a proper burial and then return to Kyiv, as there is nothing left for him anymore in his childhood home.

A Giant Balloon Was Spotted in Montana. It’s All Anyone Can Talk About.