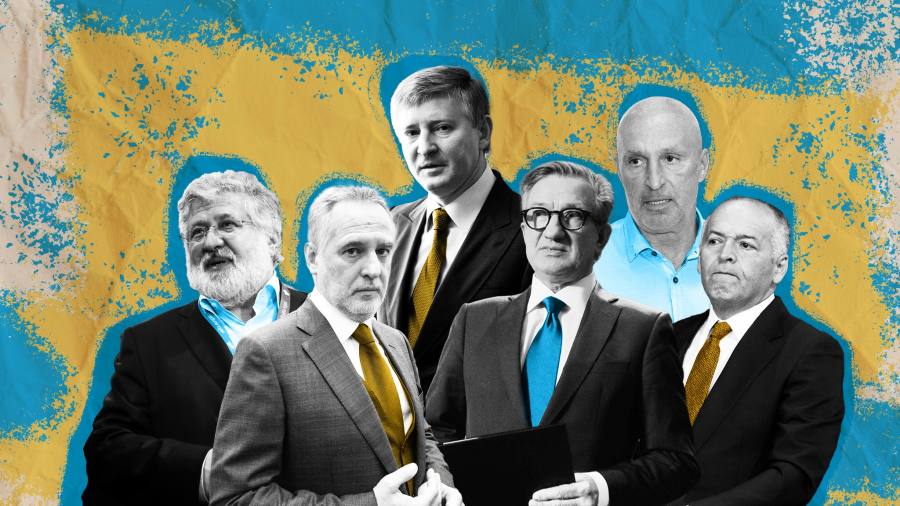 A week after Russian troops poured into Ukraine and advanced on Kyiv, a group of volunteers commandeered a large house outside the capital for a makeshift dispensary and field hospital. The mansion belongs to Viktor Pinchuk, one of Ukraine’s richest men, who like many of his fellow billionaires had left the country at the outset of the war.

Pinchuk, who has since made return visits to Ukraine, initially agreed to allow the activists to use the unoccupied building. There was a war on, after all, and everyone had to do their bit. But the volunteers soon overstayed their welcome and resisted their removal. They invited a local news outlet to film their takeover of the lavish property.

“We are here until the victory,” Hennadiy Druzenko, the activists’ leader, crowed to Ukrainska Pravda, a news website.

The occupation of Pinchuk’s mansion neatly illustrates how the war is changing the fortunes of Ukraine’s business elite, who played a vital role in propping up the country against Russian aggression in 2014, cementing their political influence and their financial interests. Eight years later they have become more marginalised and their economic clout has waned.

“My impression is they are lost,” said Timofiy Mylovanov, a former economy minister. “They have no idea what to do.”

On February 23, the day before Russia launched its full-scale invasion, President Volodymyr Zelensky summoned Ukraine’s most powerful business figures to his office. Some, like Pinchuk and Rinat Akhmetov, Ukraine’s richest man, returned to the country expressly for the meeting.

Whereas President Vladimir Putin lectured Russia’s oligarchs from a distance at a similar meeting in the Kremlin the following day, Zelensky’s gathering was more hospitable, with the guests around one table. But the message was similar: get behind your leader in a time of war.

Two of those present said Zelensky appealed for them to put aside their rivalries and unite in defence of the nation — nothing more, nothing less.

It was a far cry from 2014, when the country’s oligarchs were at the forefront of Ukraine’s response after Russia annexed Crimea and then carved off a chunk of the eastern Donbas region in a proxy separatist war.

With the woefully ill-equipped and undermanned army caught flat-footed, the business elite funded voluntary battalions that stepped into the fight. Several oligarchs were appointed to serve as governors of unstable Russian-speaking regions where Moscow was trying to instigate other separatist uprisings.

Ihor Kolomoisky, co-owner of a diversified business empire spanning banking, ferroalloys and media, was appointed governor of his native Dnipropetrovsk region, which bordered the breakaway Donbas. He backed scores of voluntary fighting groups to crush domestic pro-Russia movements and later take the fight to Donbas.

Serhiy Taruta, a steel tycoon, was appointed governor of the Donetsk region; Oleksander Yaroslavsky, head of Kharkiv, Ukraine’s second-largest city. They used their authority, resources and media power to mobilise the population against Russia’s attempt to destabilise and break up the country.

Others like Akhmetov, who had previously supported the pro-Moscow Party of the Regions of ousted president Viktor Yanukovych, sided with Kyiv.

Eight years later, with Ukraine’s army well trained and battle hardened and in a far more resilient state, the country’s oligarchs are playing a more passive role in the nation’s defence — donating money and supplies like millions of their compatriots. One said they were crowdfunding the war effort, like everybody else.

Akhmetov and Pinchuk have mounted a PR effort to earn recognition for their philanthropic efforts. Others, such as Kolomoisky, a key supporter of Zelensky’s presidential campaign, have been conspicuously absent. Even Dmytro Firtash, the exiled gas tycoon wanted on corruption charges in the US and once considered close to the Kremlin, has said he wants to return to Ukraine to help the war effort.

Akhmetov said he had allocated €100mn in humanitarian aid and support for the Ukrainian military and adapted his businesses to “wartime operations as much as possible”.

“The crucial task for us now is to help Ukrainians survive, and Ukraine win,” he said by email. “It is already crystal clear that both our business and our country are suffering enormous losses because of the war.”

Like other tycoons whose business empires originated with assets in Ukraine’s eastern industrial heartland — now at the centre of the war — Akhmetov has taken a big hit. He is suing the Russian government for up to $20bn in losses at his two mammoth steel plants in Mariupol, including Azovstal, which was destroyed in Russia’s assault.

The oligarchs have also lost political leverage. Their television channels convey the same government lines on the war, in line with broadcasting requirements and censorship. Meanwhile Zelensky, who last year angered the tycoons when he passed an anti-oligarch law to cut their political influence, has grown in popularity and authority.

Oleksiy Danilov, Zelensky’s national security chief who has played a big role in efforts to curb the oligarchs’ influence, told the Financial Times that since the Russian invasion they had behaved “in various ways”, and hinted that some would be held accountable after the war ends.

Ukraine’s richest industrialists are likely to find fresh business opportunities in the mammoth task of reconstruction funded with hundreds of billions of dollars of western aid. Some are also expected to apply for compensation from the government for factories and facilities destroyed in the war.

But western donors are likely to press for reforms and tougher anti-corruption enforcements in return for funding Ukraine’s reconstruction efforts, potentially further trimming the power of the top business elite.

“There is an understanding that Ukraine will not be resilient against Russian aggression if it does not clean itself,” said Orysia Lutsevych, head of the Ukraine programme at Chatham House, a think-tank in London. “They [the oligarchs] will not have the same kind of entitlement as they had after independence.”

“It is going to take a lot of discipline and intellectual rigour,” Grigorishin said.