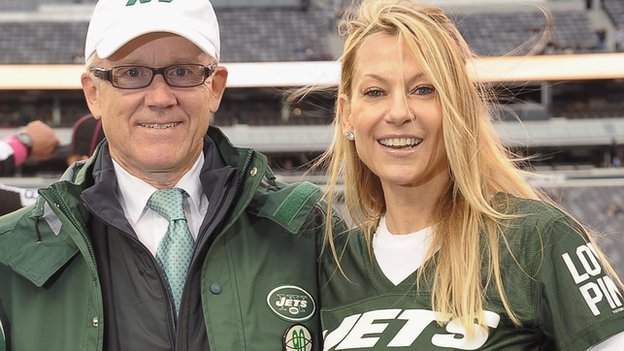 As they watched Ukraine’s humanitarian crisis unfold, Suzanne Johnson and her family felt they had “no choice” but to act.

Suzanne’s father Stefan moved to the United States after World War Two as a 21-year-old refugee from Ukraine; her mother is a first-generation immigrant.

They raised Suzanne in Manhattan’s ‘Little Ukraine’ district, and their daughter is now married to Woody Johnson – team owner of NFL franchise the New York Jets.

Not only have the Jets pledged to donate $1m (£893,000) to help those affected by the Russian invasion of Ukraine, the Johnson family made a humanitarian trip to neighbouring Poland in July.

Suzanne, her husband and their two teenage sons visited the Dom Wczasowy orphanage and Bursa Miedzyszkolna college dormitory, which is serving as a refugee centre.

“It was an eye-opening experience,” Suzanne told BBC Sport. “The refugee centre was housing the women and children of families from near the nuclear power plant.

“They’re educated people who had full lives and had to flee, with 30 minutes’ notice to throw anything they could into a sack.

“These women were crying to me. They’re so proud and hate the fact they were put in this position where they have to rely on people.

“I can’t even imagine someone telling me right now you have 30 minutes to flee the United States. It was absolutely heart-wrenching.”

‘It’s our duty’ to help Ukraine

Suzanne’s father arrived in New York with $5, a bag of clothes and not a word of English, but was given the opportunity to make a life for himself.

With the help of the Ukrainian church, he became a builder, started a family and developed a successful business building family homes.

Suzanne forged a successful career as an equities manager before meeting her husband, who served as the US ambassador to the UK from 2017-2021.

“My father always told me what life was like growing up in a Communist country, living through the war and coming to the US with virtually nothing,” she said.

“I’m now in a privileged position so I thought that if I could be instrumental in lending any help, both financial and physical, it was my duty because people did that for my father.

“He passed away three years ago and would be sick to his stomach seeing his country being invaded. It’s my duty as his daughter, and my sons’ duty as his grandsons, to offer this support.

‘Seeing it first hand, you want to make a difference right away’

Russia invaded Ukraine in February, and the humanitarian crisis will continue when the fighting stops. About 7.5 million refugees have fled Ukraine, with almost 1.4 million heading to Poland.

The Johnsons have spread their $1m donation over 10 months, with $100,000 donated each month to a different organisation which can direct the funds where they are needed most, as soon as possible.

Among the organisations they have helped is United24.

While watching Wimbledon, Suzanne’s eldest son Brick, 16, saw world number one Iga Swiatek announce a charity tennis event to be played in her native Poland when the Johnsons would be there.

The event, in Krakow, featured Ukraine’s Elina Svitolina, who is an ambassador for United24.

Brick chose that organisation for July’s donation. He and his brother Jack, 13, presented the cheque, with the funds to be directed to children’s hospitals in Ukraine.

“I spoke to kids my age who told me about how different life is living in an orphanage, the pain they went through crossing the border and being separated from their families,” said Brick.

“It doesn’t really matter where you live, all kids have so much in common. I spoke to a lot of them about sports and played soccer with them.

“When you see what’s going on first hand, you want to make a difference right away, even if it’s just putting smiles on kids’ faces.”

Jets use Bengals game to ‘make sure message isn’t forgotten’

The Johnsons have also used their platform to spread the world during the NFL season.

At the Jets’ home game against the Cincinnati Bengals on Sunday, they organised for Ukrainian flags to be displayed at each endzone and on the players’ helmets.

They screened a video to a crowd of 73,708 at the MetLife Stadium to remind fans of the ongoing crisis, and raise awareness of the family’s efforts to help those affected.

Proceeds from the gameday raffle – and the Jets’ August donation – went to CityServe, to support a housing project in Krakow.

“I want this message not to be forgotten, and maybe it will act as a stepping stone for other teams to take some initiative on the Ukrainian crisis,” added Brick, who takes his nickname from former Jets player D’Brickashaw Ferguson.

Once the conflict ends, the Johnsons plan to visit Ukraine, in particular to meet more of the children who have been orphaned because of the war.

“Being able to connect with them, to make a bit of difference to their lives, made my heart warm,” said Brick.

“There are signs of hope almost. You want to see them recover, get back on their feet and start their lives again.”

How the ‘Price Cap’ on Russian Oil Works

Ukraine war: Can we expect peace talks to begin?