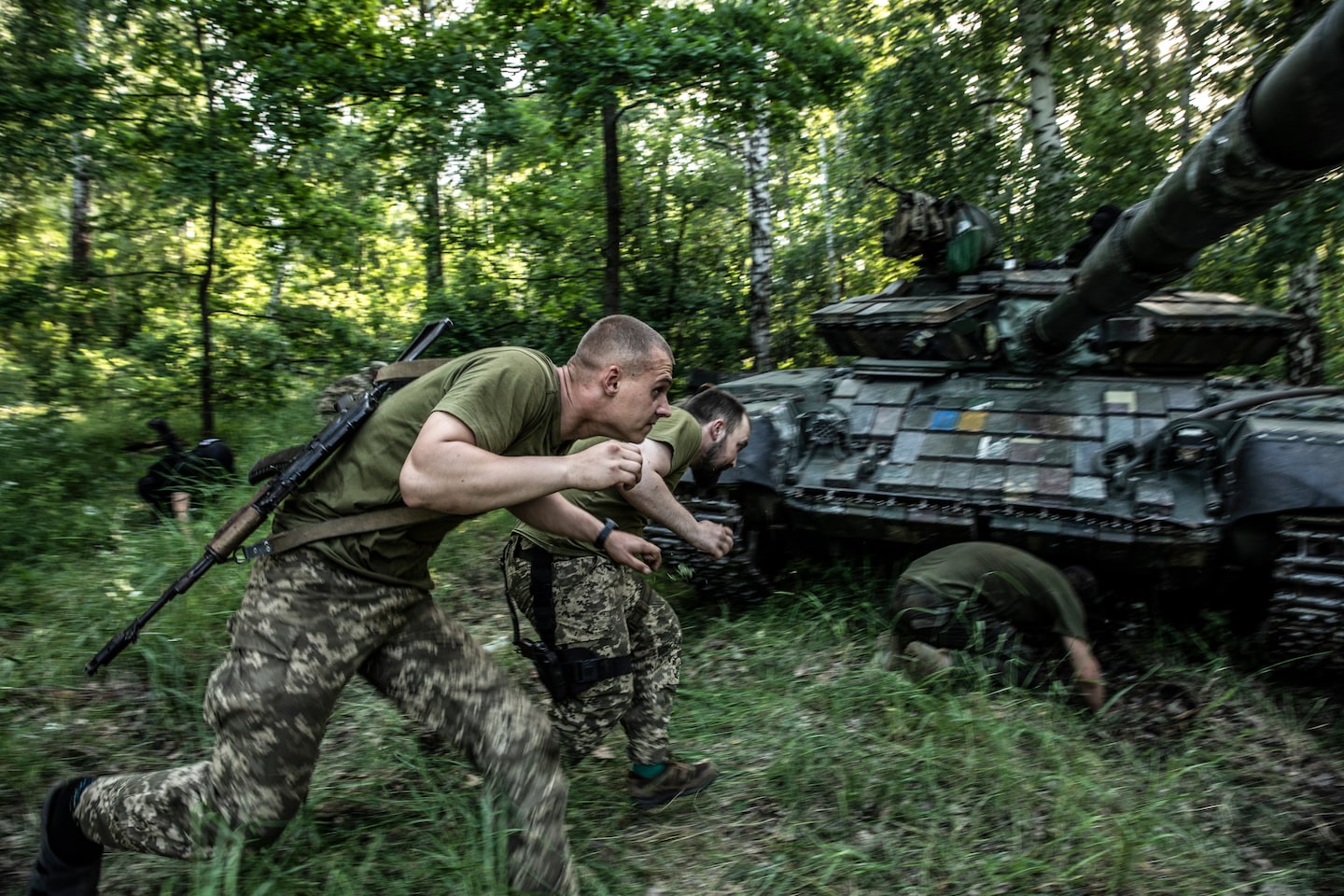 ON THE ROAD TO LYMAN, Ukraine — First came the distant bang of Russian artillery firing.

Then the ominous whistle and crackle of incoming shells, which landed within 50 feet of a Ukrainian tank position, sending dirt and rocks flying and shards of deadly metal slashing through the air. The soil shook — boom, boom, boom.

Ukrainian troops dove under their tank, screaming at Washington Post reporters to take cover with them. Together, they pressed their bodies against the damp earth and grass, as Russian firepower rained down along this eastern front, where Moscow is concentrating its military might and inflicting massive casualties on outgunned Ukrainian forces.

“Get out from under here!” one soldier yelled, understanding that the tank — despite serving as temporary cover — was in fact a prime target. “Go! Go! Go!”

The group sprinted through the woods, as the tank roared down a dirt path.

Having reached its 100th day, the war between Russia and Ukraine is now at a demoralizing stage for many Ukrainian soldiers. In the trenches of this coal mining region, they are reeling from brutal Russian artillery onslaughts that call to mind the indiscriminate savagery of World War I. They are holding out hope for victory despite the grim reality of their struggle’s mounting cost, and successfully holding the line in many places to make the Russian fight a painful slog.

Russian forces are killing as many as 100 Ukrainian troops each day and wounding up to 500 more on the eastern front, President Volodymyr Zelensky said this week. At that rate, Ukraine would be losing, in about 2½ months, as many forces as the United States lost in Iraq and Afghanistan over 20 years. In recent days, Ukrainian territory has slipped away incrementally to Russian forces, who according to Zelensky now control 20 percent of the country.

“Russian artillery is shooting from morning until evening,” said Volodymyr Pohorilyy, 43, intelligence commander of the Dnipro-1 battalion, which holds several key positions in the region. “If our side shoots one their way, we get 10 or 15 back.”

The Russian military, having failed in its botched attempt to seize Kyiv and overthrow the Ukrainian government, has regrouped for the second stage of the war. Moscow has redirected nearly all its remaining artillery to a single area. The Kremlin’s hope is to accomplish its new stated goal of taking all of Ukraine’s eastern Luhansk and Donetsk regions, which together comprise Donbas.

“In some respects, this is one war but two distinct campaigns,” said Michael Kofman, a Russian military analyst at Virginia-based CNA. “The first was to decide whether or not Ukraine would survive as an independent state — and Russia lost that conflict decisively. … This second phase is about what territory that independent Ukrainian state will ultimately control, and that remains very much in contest.”

Russia’s catastrophic missteps and embarrassing retreat in the first stage of the war buoyed Ukrainian spirits and resolve. But the barbarity of Russia’s concentrated artillery fire has made the second stage far more challenging for many Ukrainians in the trenches. The war has seen relatively few infantry engagements or tank-on-tank battles; Russia, rather, is concentrating overwhelming artillery power on relatively small areas to blast its way forward in a path of grave destruction.

“They have adopted this technique, which is a World War I technique fundamentally, of using artillery to just obliterate everything in front of them and then crawl over the rubble,” said Frederick W. Kagan, director of the Critical Threats Project at the American Enterprise Institute.

He said facing down such artillery bombardments is daunting and devastating for Ukrainian soldiers.

“The amount of firepower, the number of explosions, the length and duration of the attacks — all of that together, and the fact that you can’t defend against it, you can’t shoot down the rounds, means it’s a lot of casualties and it is also incredibly demoralizing,” Kagan said. “It is disorienting. This is where ‘shell shock’ comes from.”

Moscow is obliterating towns with faraway artillery to minimize its losses and play to the Russian military’s strengths as an artillery-focused force. But Kagan said Moscow is also relying on those tactics because Russian forces have been gutted by casualties and disenchantment from the first phase of the war and have shown an inability to fight successfully otherwise.

The losses Ukrainian forces are suffering are horrible, Kagan said, but they aren’t necessarily going to force Kyiv to capitulate or “lose” the broader war. Even if Russia takes control of all of Donbas, which would be difficult due to Ukraine’s defenses, the Ukrainians still have forces that can counterattack and retake territory elsewhere, he noted. Ukrainian troops, for example, recently launched a counteroffensive near the occupied city of Kherson.

On Thursday afternoon, Ukrainian soldiers said the four rounds of artillery that struck their position appeared consistent with cluster munitions. Such weapons are banned under an international treaty because of their ability to inflict indiscriminate damage in populated areas or leave behind unexploded ordnance as they spray “bomblets” over a wide area. Neither Ukraine nor Russia is a signatory to the treaty.

No soldiers or journalists were wounded in the attack, which appeared to come from the direction of Lyman, a small city that the Russians recently seized.

Ukraine’s losses are mounting as Ukraine awaits further assistance from the West. The Biden administration is sending Ukraine M142 High Mobility Artillery Rocket Systems, commonly known as HIMARS, but U.S. officials have said it will take about three weeks to train Ukrainian forces after they arrive. Russia possesses artillery with longer ranges, allowing Moscow to strike Ukrainian troops from afar. Kyiv lacks such equipment, and has less ammunition.

In interviews with nearly two dozen troops in recent days, many bemoaned their lack of adequate ammunition, saying they will be unable to push back the Russians and regain Ukrainian territory without significant assistance. Several troops reached by phone Friday said major shelling attacks were underway in the key hubs of Slovyansk and Bakhmut.

The situation has been challenging for Ukrainian military morale. Artillery shells cover a wide radius when they explode, sending life-threatening shards of metal in all directions. Russia also has been using TOS-1A systems firing thermobaric warheads, sometimes called vacuum bombs, which can kill soldiers even in trenches by unleashing multiple pressure blast waves.

For weeks, Pohorilyy said, troops from his battalion fought to defend the city of Rubizhne, even as they waited for further Western aid. The Ukrainians ultimately suffered severe losses and were forced to fall back.

The city is northwest of Severodonetsk, where Russian forces are battling with Ukrainian troops in the city center. If Moscow takes the city, the Kremlin will be able to boast that its forces control nearly all of the Luhansk region.

“We need help,” Pohorilyy said. “If it was foot soldiers against foot soldiers we could do something about it. But they’re 10 kilometers away, just throwing bombs at us.”

“They don’t hold a city until they destroy it,” Pohorilyy said.

Capt. Aleksandr Taranushchenko, 37, said that for three weeks his company has held a small position next to the river that runs near Rubizhne, moving back and forth over a small footbridge that separates them from Russian forces.

To have any chance of pushing the Russians back, he said, they need heavy artillery, along with antitank and antiaircraft weapons.

“The city isn’t standing anymore,” he said. “The only thing left is our position. Everything is in ruins.”

The immense destruction from weeks of such Russian tactics has left civilians here in dire conditions — some hunkered down in basements in encircled towns, others preparing for the same in the weeks to come. Many civilians have been wounded and killed in strikes.

In several small towns scattered near the front lines, water, gas and power have been cut after strikes hit critical infrastructure. In Slovyansk, civilians, including the elderly, are visiting public pumps to fill jugs with water.

At one hospital in the region this week, soldiers spilled out of ambulances — many bleeding from apparent shrapnel wounds.

Alexiy Holovko, 29, who belongs to the Dnipro-1 battalion, spent more than a month working as a doctor in the trenches in Rubizhne, where he said at least 10 soldiers were wounded each day. Sometimes, he said, they would be patched up and then head right back out to fight. The wounds were almost entirely from long-distance shelling.

“We haven’t seen the enemy in the eyes a lot,” he said.

When troops witness the severity of these injuries, it can be even more dangerous for morale than battlefield deaths, several commanders said.

“Wounded people can mentally damage the unit,” said Yura Bereza, 52, lead commander of the Dnipro-1 battalion. “They’re yelling, they’re feeling horrible. People who are supposed to be shooting have to stop to help them.”

On a recent morning, the battalion’s commanders, who each oversee a different key route in the Donetsk region, gathered in a war room at their makeshift base. They leaned over a large wooden table covered in paper maps, small triangles marking strategic positions.

The leaders were plotting how to defend their dwindling territory as the Russians plowed ahead, cutting off strategic supply routes and shelling key roads used by Ukrainian troops.

In the small town of Zolote, where troops said civilians are left without food and water, Russian troops surrounded Ukrainians on three sides, said Sgt. Yevhen Bazulin, 44, commander of a company holding a position there. The Russians launch nonstop shelling on Ukrainian troops, leaving them unable to push forward.

So far, he said, one of his soldiers there has been killed and eight others wounded.

“They’re in hell,” Bereza called out from across the room.

The Russians are “firing everything at them,” Bazulin said of his troops in Zolote. “We don’t always understand where they’re shooting from.”

Even after they come under intense shelling, he said, they are sometimes left with no option but to stay put and risk being hit again.

On Wednesday, down a dirt road in a rural part of the Donetsk region, a small team of Ukrainian soldiers belonging to the Dnipro-1 battalion sat next to trenches they had dug to attack tanks in case of further Russian advance.

Moments later, the bang of incoming artillery echoed through the sky. Then the whistle of a shell.

The troops scrambled toward shelter, shoving Washington Post reporters ahead of them into an underground bunker.

Over the next two minutes, two more shells exploded just outside, all within around 500 feet of the Ukrainians’ bunker.

As the sky went quiet, a Ukrainian armored personnel carrier charged down the dirt road, with stressed soldiers hanging on tight as they fled the scene. The vehicle cut onto a main road and raced away, fleeing toward safety in a place where — Ukrainian soldiers have learned — nowhere is fully safe.

Sonne reported from Washington. Yevhen Semekhin contributed to this report.