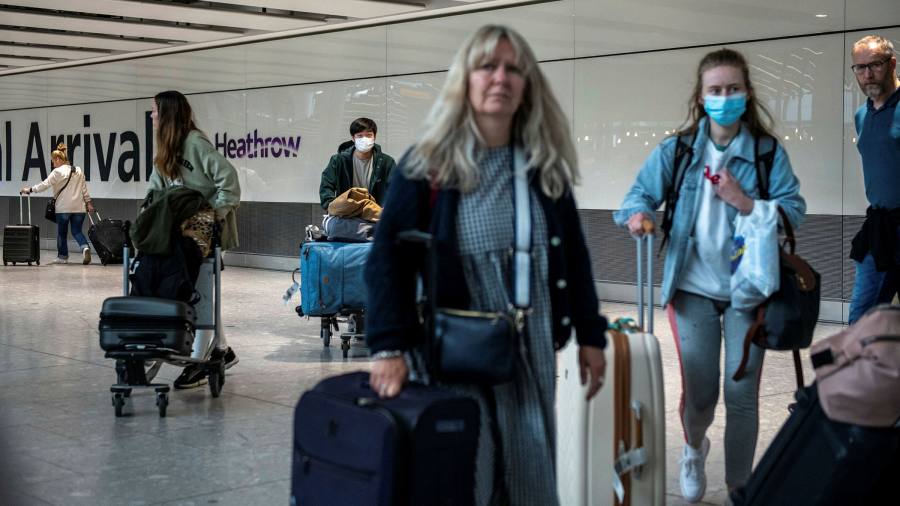 The government’s travel rules to control the spread of coronavirus were “disproportionate” and “arbitrary”, according to an influential cross-party group of MPs who called on ministers to do more to ease a hiring crunch as the aviation industry starts to recover again.

The findings form part of a report into the government’s handling of travel during the pandemic. It said the rules were “disproportionate to the risks to public health, causing a severe financial shock to the sector”.

Huw Merriman, the group’s Conservative chair, acknowledged that the government faced a “difficult position” in responding to the global pandemic. “However, government action was inconsistent. It left industry and passengers confused and unable to plan ahead,” he said.

The MPs’ findings come a week after a report into travel rules from the National Audit Office said the “government cannot demonstrate its implementation measures have achieved value for money”.

The travel rules were meant to reopen international travel safely during the pandemic by introducing testing requirements for returning passengers, as well as grading each country green, amber or red, depending on rates of coronavirus infection. Each “traffic light” carried a different set of rules for returning passengers, including mandatory hotel quarantine for countries on the red list.

But the travel industry despaired at an often chaotic system that saw countries rapidly reclassified, often with little warning, resulting in scrambles as people rushed back to the UK.

There is no evidence that the use of mandatory hotel quarantine cut infection rates, while the return of strict travel restrictions in late 2021 “had little effect on the spread” of the Omicron variant in the UK, the report said.

It said companies should be compensated for the business damage if future travel restrictions are introduced and go further than any rules affecting the domestic economy.

The report also called for greater consumer protections, including handing the Civil Aviation Authority the power to fine airlines that do not properly refund customers, automating refunds rather than forcing people to apply themselves, and a year-long delay to proposals to allow Heathrow airport to increase its landing charges.

Ministers scrapped all travel restrictions in March as part of a wider rollback of Covid-19 rules and indicated that the future “default position” would be to impose as few restrictions on travel as possible.

The travel industry’s recovery has also been marred by staffing problems across the industry, with hours-long queues reported at several airports over the past month.

The report said government should help ease the backlog in staff awaiting security clearance by building greater flexibility into the system and prioritising airport workers.

Ministers have already written to aviation heads to outline plans to help speed up the recruitment process, including clearing new hires to undertake training before background checks are complete.

Airlines UK, a trade body, said the government should now focus on supporting aviation, including the transition to net zero, while the Airport Operators Association called for “a comprehensive recovery package”, including financial support to restart some routes lost during the pandemic.

The Department for Transport said the rules were “in place for no longer than absolutely necessary and the UK was the first country in the G7 to remove all travel restrictions”.

“In future, the government’s default approach will be to use the least stringent measures, to minimise the impact on travel as far as possible and these will only be implemented in extreme circumstances,” it added.