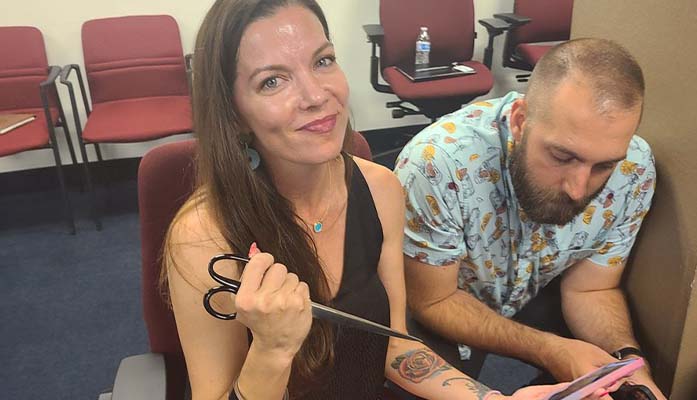 As the last night of the 2022 legislative session drew to a close, Republican State Senator Michelle Ugenti-Rita joined with Senate Democrats to kill the Back The Badge referendum that Republicans were trying to send to the November ballot. Just a short while later, Ugenti-Rita and those same Democrats would rely on the police to keep them safe, when an abortion rally outside the Senate building turned violent, and protesters attempted to force their way into the building.

The referendum would increase penalties for violent crimes that deliberately target first responders while they are performing their duty.  It would cover law enforcement officers as well as firefighters, paramedics, and others.  It also provided a $250,000 death benefit for first responders who were killed while on duty.  A key component is that the death benefit would be paid within 30 days, which would protect the family of the fallen in the immediate term.  Many such benefits are paid eventually, but families can be placed under a great deal of financial strain while waiting for their benefits to arrive.

The measure was actually passing with the support of three Senate Democrats, including Raquel Teran, who also serves as the chairwoman of the Arizona Democratic Party.  This was a surprise given the hostility shown to law enforcement by leading Democrats, but onlookers attributed it to the Democrat’s belief that the referral would pass, and that it would not be good to be seen as anti-police and fire if the measure was going to pass anyway.

Then Ugenti-Rita took her microphone and began to attack the proposal as a series of terrible ideas, put together by people she appeared to have a personal beef with, and deserving of defeat.  When the Democrats realized Ugenti-Rita was going to vote NO, they flipped their votes to NO and the measure was defeated – one vote shy of passage.

“Stunned,” said one eyewitness to the proceeding. “No one really knows when Ugenti is going to just lose it, but I don’t think anyone expected her to end her legislature career with two middle fingers to law enforcement.”  Ugenti-Rita is running for Secretary of State instead of re-election.

Soon after, the Senate chamber was cleared as rioters had begun to try to break windows and force doors in an effort to breach the Senate building, and DPS officers had to fire tear gas to disperse them.

The Senators, including Ugenti-Rita, were relocated to a safer location in the building and Ugenti-Rita apparently grabbed a pair of scissors to defend herself, should the need arise.

Senator Ugenti Rita is armed with scissors. We can laugh about it now that we are safe but when we were all worried for our safety she went straight for the scissors. Zaa pic.twitter.com/PUFQsDzmrw

She needn’t have worried.  The same law enforcement she and her Senate Democrat allies had just voted against protecting, kept her and everyone else in the building safe.

“It all reminded me of Beyonce turning the Super Bowl halftime show into an anti-Police demonstration, then getting police protection into and out of the Super Bowl itself.” said one disgusted “former Ugenti” supporter.

Ugenti-Rita’s next date with voters is the GOP primary starting July 6th.