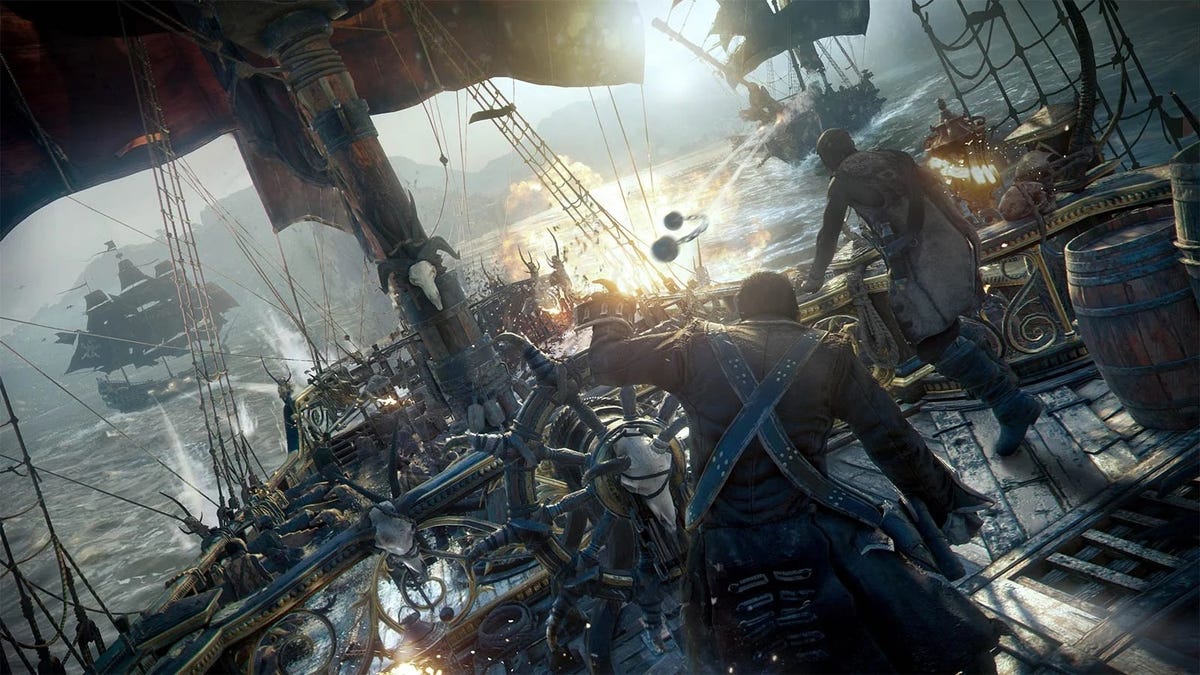 Narrated test footage for Skull and Bones has leaked online, showing off a big part of the blockbuster’s transformation since it was last officially shown at E3 2018. It’s pretty and also looks like a textbook modern Ubisoft game. Players will collect blueprints, loot materials, and build up their infamy rank to get bigger, better ships. Rise and grind sailors.

The new leaked gameplay footage, which runs just over six minutes, details how players will complete contracts for NPCs to rank up and unlock new ship designs and upgrades (Update: 4/29/22, 2:40 p.m. ET: the footage has been removed). They’ll stock their ships with “rations, water, repair kits and ammunition” before going out to sea. If their ship gets destroyed or their crew mutinies, they’ll lose rank and respawn somewhere else while other players have a chance to salvage their wreck. Sources tell Kotaku it could finally be out as soon as fall 2022.

When Skull and Bones was first revealed at E3 2017, it was pitched as a session-based shooter focusing on PVP. The new test footage instead emphasizes resource management, showing how players will harvest things like ore, lumber, and animal skins which can then be refined at the main social hub into other materials. “Crafting is an essential activity for you to progress as an infamous pirate,” the narrator says. The footage stresses that the game can be played solo, but Ubisoft recently described it as “multiplayer-first.” There is even a robust “Vanity Shop” for cosmetics.

As Kotaku reported last year, Skull and Bones’ development has been a mess, marked by a lack of clear direction, ballooning costs, and tons of attrition. Spearheaded by Ubisoft Singapore, the project began as an expansion for 2013’s Assassin’s Creed IV: Black Flag before evolving into half a dozen other types of games in the near-decade since.

Despite continued statements by Ubisoft leadership that the game has been coming along just fine, the delays and attrition continue, in addition to alleged tumult and misconduct at its lead studio. Skull and Bones lost an associate game director in December. Other high-ranking designers and writers have also recently departed. The game lost its latest producer just a couple months ago.

According to two sources familiar with the game’s development, Ubisoft had hoped to launch Skull and Bones as early as this spring. That date was later pushed back to the summer, and then to September. There is mounting pressure to ship the game though, which some sources believe has cost Ubisoft over $200 million at this point, in part because of an existing agreement with the Singapore government.

Ubisoft did not immediately respond to a request for comment, but did acknowledge the leak in a tweet Friday teasing an official upcoming reveal of the rebooted project. Update: 4/29/22, 12:13 p.m. ET: A spokesperson provided the following statement:

We confirm this is a glimpse of our upcoming game Skull and Bones. Recently, we ran a technical test for the game and some of its details became public. This video footage was taken from an early version of the game and doesn’t reflect the quality and features of the final game. We’ll share more details about the game soon.

As a live service game, Skull and Bones will be expected to continue growing and evolving even after it’s released. But former developers associated with the project Kotaku has spoken with are skeptical it can deliver anything close to what the publisher or players might be expecting at this point. A reddit post where the footage was shared is full of comments simply asking Ubisoft to make another Black Flag instead.