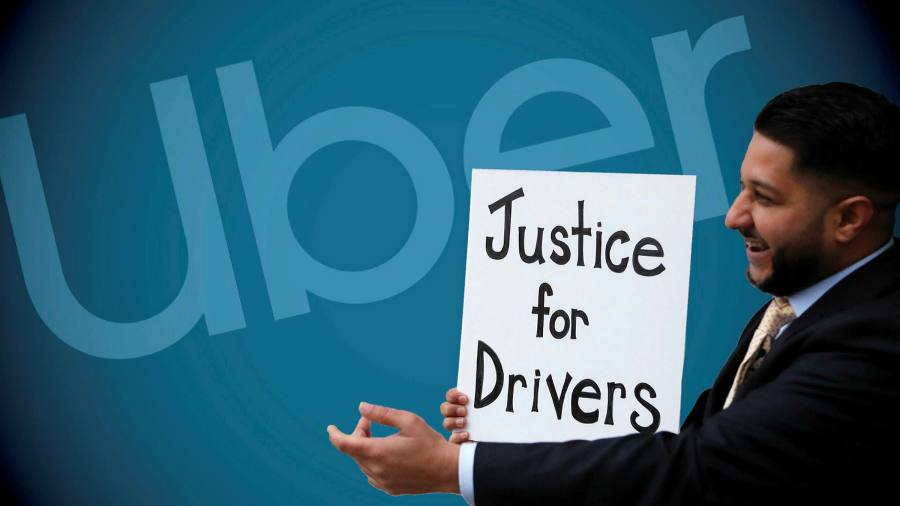 Uber will reclassify its UK drivers as workers, falling partly in line with a recent Supreme Court ruling, but probably setting up a fresh round of disputes over what should be considered “working time” in the gig economy.

The decision means Uber’s roughly 70,000 UK drivers will for the first time be entitled to holiday pay equivalent to 12.07 per cent of their earnings, and to automatic enrolment in a workplace pension scheme.

However, the change may make little difference to drivers’ headline earnings. Uber will ensure drivers earn at least the statutory minimum wage, after expenses, for the time they are assigned to trips — but will not include any time when they have not been paired with a customer*.

The move follows last month’s landmark ruling by the UK’s highest court, which backed a group of 35 Uber drivers who first challenged their self-employed status in 2016, arguing the ride-share giant was exerting overbearing control over them in the way it allocated rides and set fares.

Reaffirming previous rulings, the court said drivers had a relationship of “subordination and dependency” with Uber and should be classified as workers — a move seen as having the potential to upend Uber’s business model, which relies heavily on passing on overheads, such as fuel, to drivers, with ramifications for the wider gig economy.

After several weeks reviewing its options — and facing the prospect of being sued by more drivers — Uber said it would reclassify drivers, starting on Wednesday. For a company notorious for its disregard of local laws in the name of innovation, the shift represents the most significant concession yet to the more traditional norms of employment law.

“This is an important day for drivers in the UK,” said Jamie Heywood, Uber’s regional general manager for northern and eastern Europe. “Uber is just one part of a larger private-hire industry, so we hope that all other operators will join us in improving the quality of work for these important workers who are an essential part of our everyday lives.”

The change in classification does not extend to couriers in its food delivery business, Uber Eats, who remain self-employed.

Uber could face fresh legal challenges over its interpretation of the Supreme Court ruling over the periods of time for which drivers should receive the hourly minimum wage.

Uber said it would calculate earnings based only on a driver’s “engaged” time in the Uber app — defined as time spent assigned to, or travelling with, a passenger. Any time waiting for customers would not be included.

This comes despite Lord Chief Justice George Leggatt agreeing, in his written judgment, with the lower courts’ determination that “working time” should begin from the moment a driver logs on to the app and is ready to accept a trip.

Lord Leggatt acknowledged, however, that the case was looking specifically at market conditions in 2016, and highlighted a previous ruling that said “the same analysis would not apply” if Uber faced meaningful competition, as Uber argues it now does in the form of Bolt, Ola and other ride-hailing apps. Furthermore, the company has said it stopped penalising UK drivers for refusing trips in 2017, removing their obligation to work.

Uber argues that it would not be possible to pay drivers the UK statutory minimum wage — which increases to £8.91 from April 1 — for all time spent online, unless it set rigid shifts or drastically reduced the number of drivers it allowed to access the app. It claims drivers in London earned £17 an hour on average last month while assigned to a trip, after factoring in costs, and that it cannot tell how many drivers log into rival apps as well while waiting for a trip request.

However, unions have argued that Uber and other ride-sharing companies intentionally flood the roads with drivers, resulting in short waiting times for customers but long periods of unprofitability spent waiting for a job to come through.

Uber’s attitude towards working time is likely to be challenged by workers rights groups, as it has in California, where studies of “engaged” time showed that roughly a third of an Uber driver’s time was spent searching for customers. Uber would not share its own estimations.

In a filing, Uber did not outline the anticipated cost of adopting the worker model in the UK, but said it would not affect its previously stated goal of posting a profitable quarter — on an adjusted ebitda basis — before the end of the year. The UK market represented 6.4 per cent of Uber’s ride-share gross bookings in the last quarter of 2020, a spokesman said.

The company would also not comment on how the changes could impact its ongoing dispute with the UK tax authorities over the payment of VAT on both gross bookings and driver fees, which could hinge on whether HM Revenue & Customs classifies Uber as a transport provider, rather than an agent between driver and passenger.

*This story has been amended since original publication to correct the characterisation of Uber’s rule change.