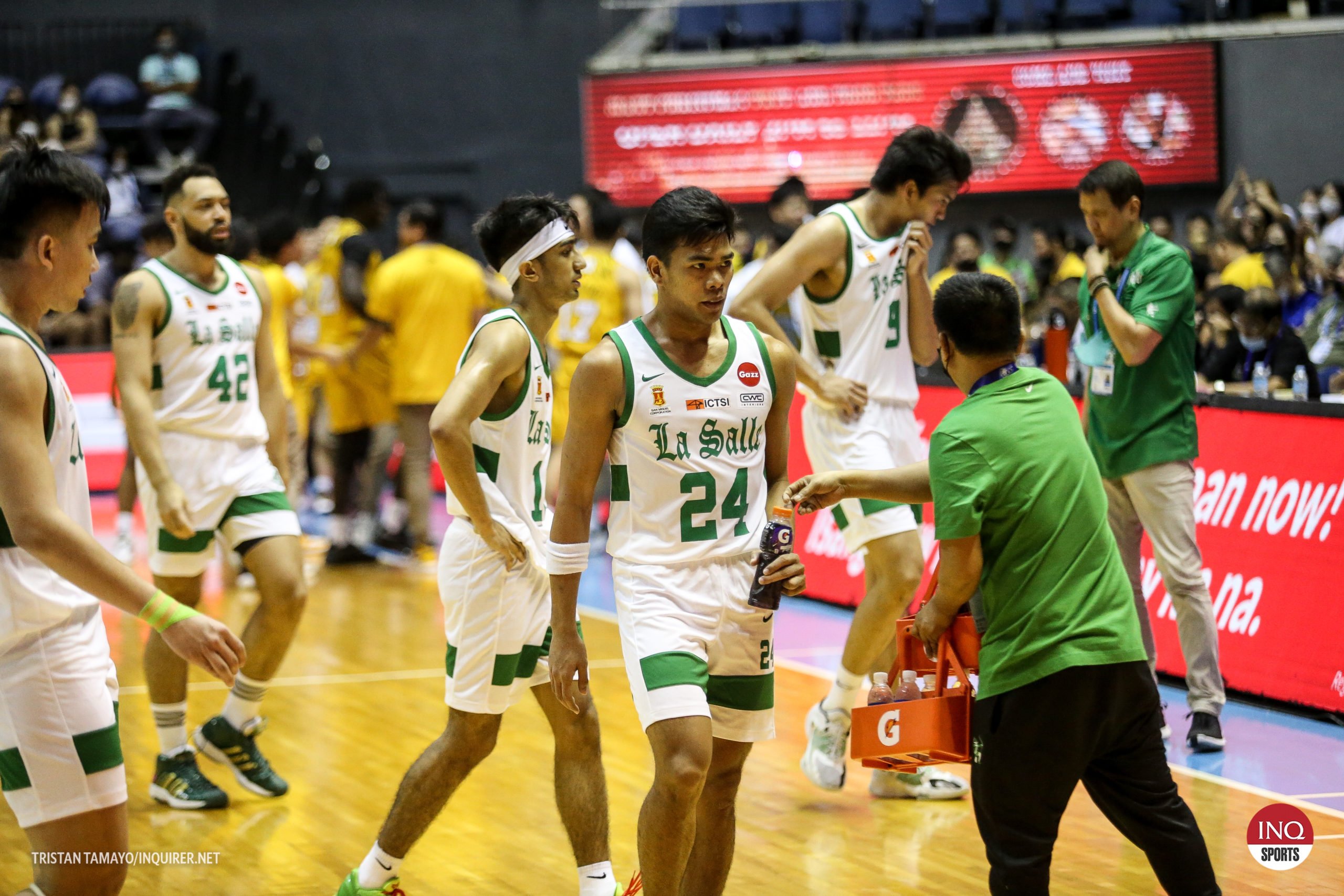 MANILA, Philippines — Evan Nelle took matters into his own hands as he put a glimmer of hope on La Salle’s dimming Final Four chances, dropping a season-high 25 points in their come-from-behind victory over also-ran University of Santo Tomas in the UAAP Season 85 men’s basketball tournament on Wednesday at Smart Araneta Coliseum.

Moments after their much-needed win to finish the eliminations with a 7-7 card, Nelle and the Green Archers were rooting for their archrivals, the Ateneo Blue Eagles, who are holding La Salle’s Final Four fate in their ongoing match against the No. 4 Adamson Falcons as of posting time.

A win by Ateneo would pit Adamson against La Salle in a playoff for the last Final Four spot.

“I just don’t want this to be the last game. Hopefully, one big fight,” said Nelle, who shot 8-of-16 from the field and had four rebounds, four assists, one steal, and a block, after the Archers overcame a tough challenge by the Growling Tigers, 77-72.

“This is the first and last [that I’ll be cheering for them] because our fate is no longer in our hands. We had the chance to control our destiny last UE game, but shit happens. Now we’re banking on them (Ateneo). I just hope Adamson loses and there will be a rubber match on Sunday, Saturday, whatever,” he added.

Nelle credited his teammates for displaying the next-man-up mentality as they missed Kevin Quiambao, who was under the weather, and Michael Phillips for the second consecutive game due to an illness. Star guard Schonny Winston is also not in his top form yet after coming off a calf injury, playing only a few seconds in the game.

“I wasn’t ready that Kevin won’t play. We were three men down. Coming to this game, when I got to the arena, I was so pumped up. Then hearing Kevin won’t play, brought down our morale He was one of our main guys, but coach kept telling us in the dugout, next man up,” Nelle said. “That’s what we did. So many people stepped up today, Raven (Cortez), JC (Macalalag), Mark (Nonoy), everyone stepped up because it’s a team effort.”

The Green Archers trailed the Growling Tigers by nine points entering the fourth quarter but Nelle refused to give up their final chance.

“This won’t be the last game. Coach kept saying one stop, one stop. No more defensive mistakes and errors, and get good shots. That’s what we did. We executed naman, but we had some lapses. Last minute, bad shots from me and Mark,” We just kept our heads down, on to the next play, bawi lang. Gasgas na nga samin yung bawi lang, but that’s the only thing we were doing, bawi lang, one stop. It paid off today.”

Fans have been making fun of Nelle’s preseason statement that La Salle is the No.1 team as it ended up on the brink of missing the Final Four.

But the Green Archer stood defiant that they are a strong team that faced a lot of adversities such as injuries, suspensions and health issues during the eliminations.

Nelle just hopes the Green Archers will be given one more chance to salvage a semifinals appearance.

“I love my group. I love the coaching staff, my teammates, and the managers. I don’t want our story to end up like this.. I know for a fact we can make a good run. The team faced a lot of adversities this season. But it’s not an excuse to always lose. I really want to continue playing with these guys, this group. I don’t want to lose,” he said.