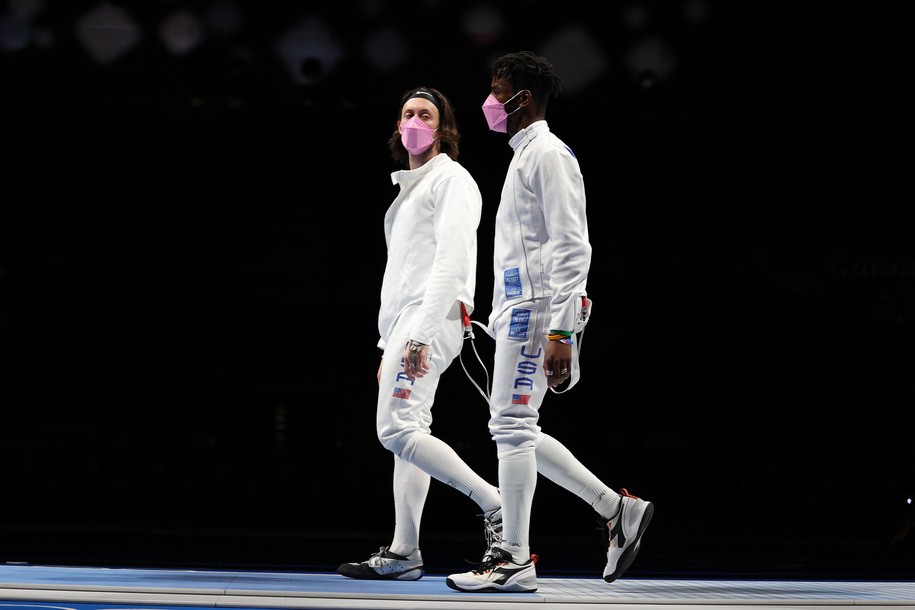 First, here are some pictures of the men’s epee team.

#TeamUSA men’s epee team wore pink masks for their opening match at the Olympics as a show of support for sexual assault victims. Alen Hadzic— their teammate accused of rape and sexual assault— is on the left. Kudos to the team for taking a stand. #BelieveWomen pic.twitter.com/yRI4azelKN

According to BuzzFeed News, the trio of pink masks was coordinated and intentional. The outlet reports that a source close to the team told BuzzFeed that the masks were a planned protest.

The men on the team are far from the only folks who have expressed concern about Hadzic’s participation in the Olympics. For some background, Hadzic qualified for the games in May. From there, three women accused Hadzic of sexual misconduct on three separate occasions, on dates occurring between 2013 and 2015. The U.S. Center for SafeSport then suspended Hadzic from fencing activities as of June 2, though he ultimately appealed the suspension and won.

The CEO of USA Fencing, a nonprofit agency designed around keeping athletes safe, Kris Ekeren, sent an email to Hadzic telling him that teammates expressed concern for their safety if he was present at the Olympic Games. “Team athletes have expressed concerns for their safety and well-being arising from your presence,” the email, obtained by USA Today, reads in part. “Which they say are likely to adversely affect their mental and emotional abilities to prepare and compete at the highest levels required for success in the Olympic Games.”

In speaking to The New York Times, Hadzic’s attorney, Michael Palma, said his client was innocent. He also told the paper that the 26-year-old had been suspended from Columbia University during the 2013-2014 academic year after an investigation involving sexual misconduct.

Because Hadzic served as an alternate on the team, he did not compete.

Again, this situation serves as a stark contrast to the treatment of American sprinter Sha’Carri Richardson, who won the women’s 100 meters at the Olympic trials in June. After testing positive for THC, her win was nullified, and she was given a suspension lasting one month. As Richardson has shared, she used cannabis after a reporter at a media conference revealed her biological mother had died.

“To hear that information coming from a complete stranger, it was definitely triggering, it was definitely nerve-shocking.” Richardson told Savannah Guthrie on NBC News, adding that she expected it to be a “normal interview.” Richardson said she used cannabis to deal with the emotional distress, saying, “I know I can’t hide myself, so… in some type of way, I was trying to hide my pain.” Imagine if we lived in a world where athletes—and especially Black women—didn’t have to hide their pain?