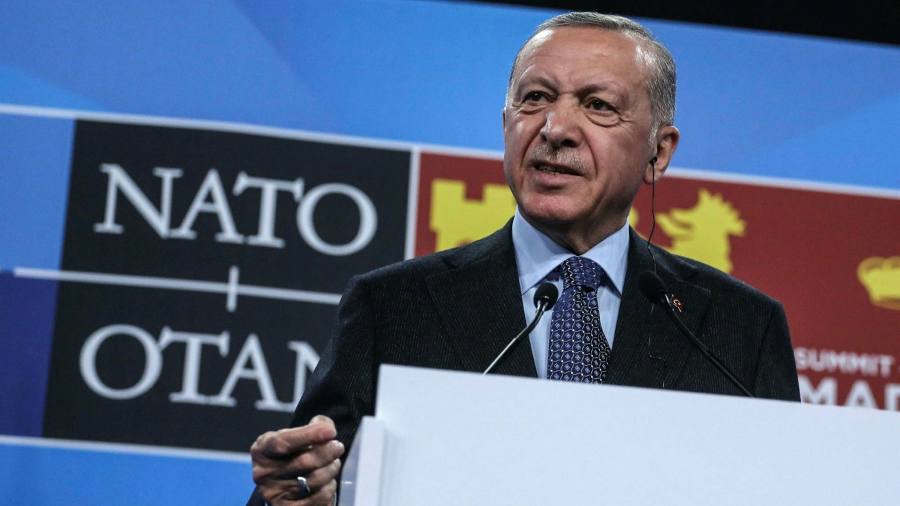 Turkey’s president Recep Tayyip Erdoğan has claimed that Sweden must extradite 73 people Ankara accuses of terrorism or face the risk that his nation’s parliament will reimpose a veto on the country’s bid to join Nato.

No such commitment appeared in the text of a joint memorandum that was signed by Turkey along with Sweden and Finland this week in an eleventh-hour deal on the eve of a Nato summit that appeared to have overcome Turkey’s objections to the admission of the two Nordic nations to the western military alliance.

The text said that Stockholm and Helsinki would “address” Turkey’s pending deportation or extradition requests. But Erdoğan told reporters: “Sweden has given us the promise that 73 terrorists will be extradited and deported to Turkey . . . We will see whether they will give them or not.”

The Turkish president warned that Sweden and Finland’s entry into Nato “would not happen” unless ratified by his nation’s parliament, which is controlled by his ruling Justice and Development party and its ultranationalist allies. He said: “Sweden and Finland must keep their word. If they don’t, this [ratification] will not come before parliament.”

Erdoğan’s insistence, made in the final press conference of the Nato summit, sours what had up to then been an event focused firmly on projecting western unity around opposition to Russia’s invasion of Ukraine and support for beefing up Nato’s high-alert defences in Europe.

Sweden’s foreign ministry did not immediately respond to requests for comment, but officials in Stockholm have previously stressed that decisions on extraditions are made by the Swedish judicial system rather than politicians.

The demand is a significant increase on the number of people that Erdoğan asked to be extradited in earlier stages of the negotiations — a request that was rebuffed by Swedish officials, according to a person briefed on the talks.

Turkish officials hailed the deal reached with the two Nordic nations as a victory for Erdoğan, who also secured a long-coveted meeting with US president Joe Biden after dropping his objections to their admission.

Biden said that he used the meeting with his Turkish counterpart in Madrid to stress that the White House supported the sale of US F-16 jets to Turkey, which is seeking the aircraft to plug a gap in its air force.

“We should sell them the F-16 jets and modernise those jets as well,” Biden told reporters. “It’s not in our interest not to do that.”

But Biden said his backing for the F-16 sale was not a “quid pro quo”, even if he believed he could help convince Congress to give its blessing, as is required for US arms exports.

The US president praised Turkey after Tuesday’s deal, arguing that the admission of Sweden and Finland would “strengthen Nato’s collective security and benefit the entire transatlantic alliance”.

Analysts cautioned, however, that the vague language of the memorandum struck by the three countries and brokered by senior Nato officials left huge scope for disagreements.

The text promised that Stockholm and Helsinki “will not provide support” to Kurdish groups that Ankara views as terrorists or the Gülen movement that Turkey accuses of plotting a 2016 failed coup. It also indicated that they would drop a de facto arms embargo against Turkey, in place since 2019. 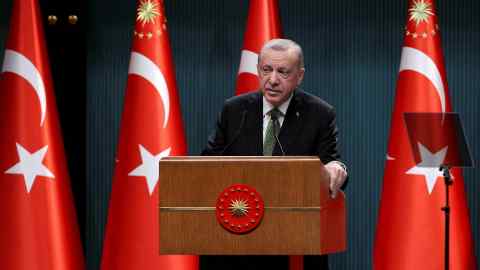 Some western officials fear that Erdoğan, who faces a challenging campaign for re-election in a vote that must be held before June 2023, could reignite the row in an attempt to shore up his public support.

“It seems the memorandum of understanding between Turkey-Sweden-Finland is a manifestation of deep misunderstanding,” Toni Alaranta, a Turkey expert at the Finnish Institute of International Affairs, wrote on Twitter in response to Erdoğan’s remarks.

He said that the three countries would have a “huge task to actually solve this before we get to any ratification”.