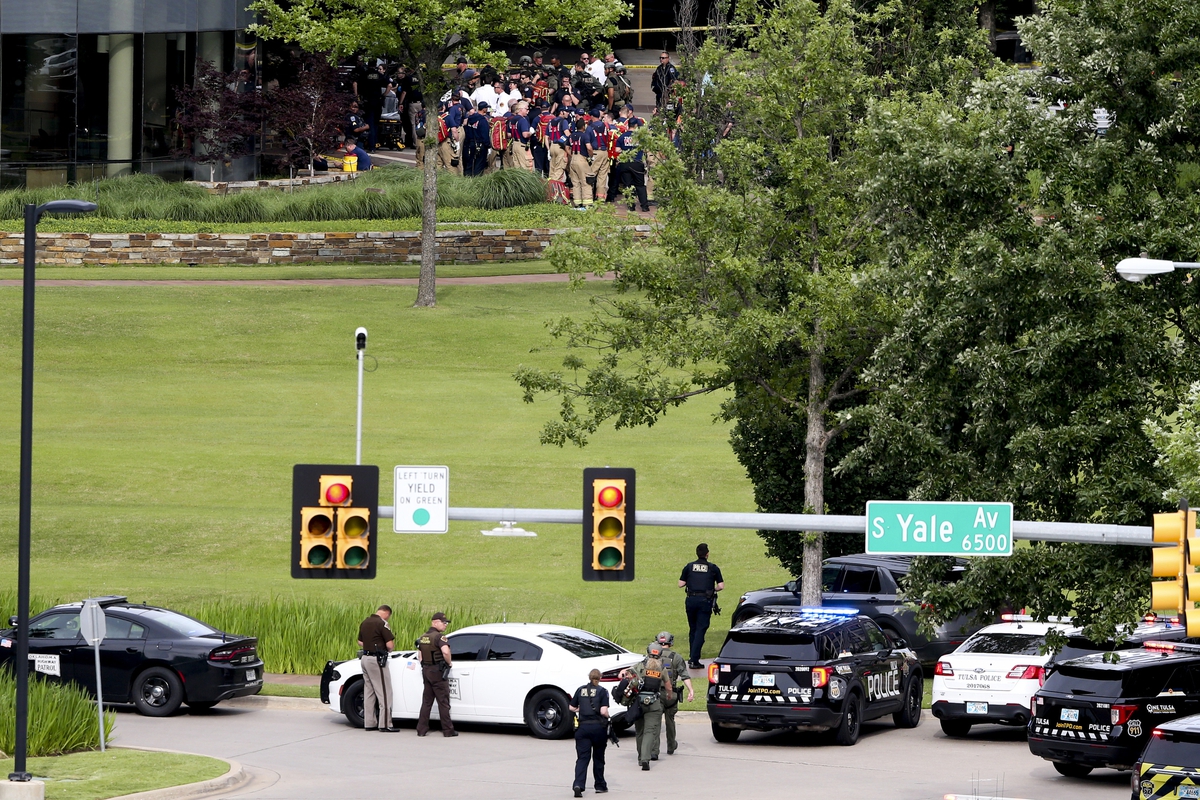 Tulsa police and firefighters respond to a shooting at the Natalie Medical Building Wednesday, June 1, 2022. in Tulsa, Okla. Multiple people were shot at a Tulsa medical building on a hospital campus Wednesday.

SEATTLE — When he was sentenced for killing three teenagers and gravely wounding another at a house party north of Seattle, Allen Ivanov said he was sorry and that he couldn’t explain why he did it.

But he noted one factor that allowed him to carry out the shooting — “the ease of acquiring a gun.” The then-19-year-old bought the assault-style rifle a week earlier and was so unfamiliar with the weapon that he sat in his car outside the party and studied the owner’s manual before opening fire on his ex-girlfriend and others.

That theme has repeated itself, yet again, in America’s latest spate of mass shootings — in Buffalo, New York; Uvalde, Texas; and Tulsa, Oklahoma — which claimed 35 lives in a span of less than three weeks. It is renewing the debate over whether restrictions such as waiting periods and bans on young adults buying semiautomatic rifles could have saved lives.

“If those had been in place, it would have made a difference,” said Paul Kramer, who led a successful 2018 effort to impose a 10-day waiting period on semiautomatic rifle purchases in Washington state, as well as a ban on young adults buying such weapons, after his son Will was gravely wounded during Ivanov’s shooting spree two years earlier. “Those mass shootings would not have unfolded the way that they did, and very likely, lives would have been saved.”

Just nine states and Washington, D.C., have explicit waiting periods before people can purchase at least some types of firearms. The restrictions can give authorities more time to conduct background checks and keep impulsive, emotional people from immediately accessing weapons they might use to kill themselves or others, according to the Giffords Law Center to Prevent Gun Violence.

The federal government has no waiting period. A bill that passed the Democrat-led U.S. House last year would extend the review period for background checks from three days to 10, but it’s opposed by Republicans and is not part of current negotiations in the Senate over how Congress can respond to the recent massacres.

In Tulsa, authorities said the gunman who killed his surgeon, another doctor and two other people Wednesday bought an AR-style rifle just hours beforehand, as well as a handgun on May 29. The shooter, Michael Louis, 45, of Muskogee, Oklahoma, had recently had an operation and blamed his doctor for continuing back pain.

In Uvalde, Texas, the 18-year-old shooter who killed 21 people at Robb Elementary School had purchased two rifles in the preceding week.

In addition, several other states, including Connecticut, Maryland and Massachusetts, require buyers of at least some types of guns to obtain permits first, sometimes including completion of safety classes. Those restrictions can function like waiting periods.

Oklahoma has no law mandating a waiting period, but some Democratic lawmakers called for a special session of the Legislature to address it among other gun violence measures after the Tulsa shooting.

“Oklahoma students will be in school in two months,” said House Minority Leader Emily Virgin. “If we fail to act before then, it will be because the Legislature has no will to do so. That’s something that I hope all Oklahomans are paying attention to.”

They suggested a waiting period on firearms purchases, raising the state’s minimum age for purchasing weapons from 18 to 21, and a “red flag” law, allowing guns to be temporarily seized from people who might pose a danger to themselves or others. Those proposals are likely to go nowhere in a GOP-controlled Legislature that has for years pushed for loosening state gun laws.

Republican Gov. Kevin Stitt, who is running for reelection, said last week after the Texas shooting that it was too soon to talk about firearms policy.

Florida stands out as a Republican-led state that imposed gun restrictions after a mass shooting. In 2018, after a shooting at Marjory Stoneman Douglas High School in Parkland left 14 students and three staff members dead, then-Gov. Rick Scott signed legislation that included a three-day waiting period and raising the minimum age to buy rifles from 18 to 21.

Scott, now a U.S. senator, “encourages all states to look at the action he took in Florida to determine what works best for their state,” his communications director, McKinley Lewis, said in an email Friday.

Nationally, about one-third of mass shooters purchased a gun within a month of their crimes, said James Densley, co-founder of The Violence Project, a nonpartisan research group that tracks mass shootings dating back to 1966.

According to a 2017 Harvard Business School review, waiting period laws that delay the purchase of firearms by a few days reduce gun homicides by roughly 17%. But Sam Paredes, executive director of Gun Owners of California, called waiting periods “an ineffective policy to try to affect gun crime.”

“The big concern we have is when people want to exercise their right to bear arms, especially when they’re a first-time gun user, they’re delayed in their ability to get the tools that they need to protect themselves,” Paredes said.

Daniel Webster, co-director of the Center for Gun Violence Solutions at Johns Hopkins’ Bloomberg School of Public Health, said waiting periods are important, and it’s obvious to him why more states don’t require them: Many firearm laws, he said, are “written by people who sell guns.”

Supporters say requiring several days or even a week or more between the purchase and delivery of a gun provides an important “cooling off” time for someone who is angry or contemplating suicide.

“If you get, for whatever reason, a person who is purchasing the gun to use it to harm others, the fact that they can’t get the gun in their hands immediately may give an opportunity for the circumstances to change by the time they do get it, assuming they’re entitled to get it in the first place,” said Rhode Island Attorney General Peter Neronha.

Giving law enforcement enough time to complete a thorough background check is another advantage of extending the waiting period, he said.

Hawaii has the longest waiting period in the U.S., at 14 days. Alan Beck, an attorney representing residents who are challenging various aspects of the state’s gun laws, said the two-week period seems arbitrary. If it’s meant as a cooling off period for someone who is angry, he said it won’t have an effect on potential gun buyers if they already own a firearm.

But state Sen. Karl Rhoads said he believes the waiting period combined with other strict gun control laws have worked, noting that Hawaii has a low homicide rate.

“If you’re really angry about something and you can go buy a gun and you can get it immediately, then you may act on your impulse,” Rhoads said. “If you have to wait a couple of weeks, you may calm down and think better of it.”

“No one change is going to make a big difference,” Moskowitz said. “But every change added together is.”