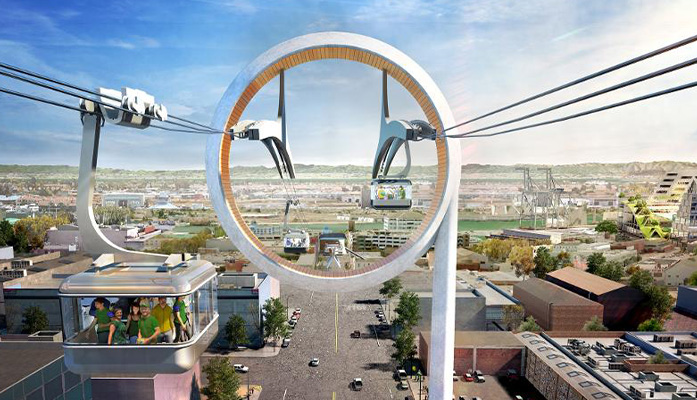 As I have detailed in several past articles, Metro Tucson is pretty much one giant urban mess.  Nearly 40% of the Metro is actually in Pima County, unincorporated in some 13 separate census designated places, half of which could be standalone cities of more than 40,000 people each.

Then in the 1980’s, listening to the anti-growth, sinecured wizenheimers from UA—it left today’s  1+ million Tucson metro without a cross-town freeway.  Nada, Zip, Zippo, None.  This has only magnified internal traffic problems and allowed a breathtaking deterioration in ordinary neighborhood streets, leading to a kind of “Stockholm Syndrome Tucson” mentality.  That’s where resigned residents have come to accept their squalor.

The City then proceeded in 2012-2014 to build an incredibly expensive, 3.9 mile streetcar system thru a part of downtown and the university.  There are plans for more extensions that have hit deep objections after the first fiasco, with its cash draining sub-minimal ridership.

Is there a way out of this circular stupidity? ….without the crazy & disruptive costs endured in building another downtown streetcar, which continues to disappoint?  Moreover, Tucson’s population might want to visit its new downtown, but it’s a real pain in the ass getting there.  If the Metro’s own population cannot easily access the area, it’s a doomed proposition.

SO HERE’S THE BASIC ‘ELEVATOR PITCH’: Instead of another [already planned] streetcar on Campbell Avenue, why not run an overhead tram (gondola) on that right-of-way, with its 400-500’ elevation differential, 6-7 miles North-South, from La Encantada & Skyline in the Catalina Foothills, to the downtown streetcar’s eastern ground terminus, near Speedway and Campbell?

There would be only one station midway, at Campbell and East Roger, adjacent to the UA’s ancient (1909), underutilized 160 acre agricultural plot.  Presumably, the UA administration would come to its senses about the potential of this highly valuable tract for Arizona taxpayers & voters.  Not to mention the City–which desperately needs to upgrade its tax base.

Also directly adjacent to a Campbell Avenue gondola is the 12 mile long Rillito River Park, AND the County’s deeply underutilized ~130+ acre Rillito Race Track.  Both sites (UA-farm & the race track) are crying out for development that enhances values, while reversing the immediate areas’ slide into more squalor.

Tucson, here’s your opportunity to be seriously unique, AND solve a traffic problem, AND encourage a vibrant downtown (you’ve already invested sooooo much tax money in), AND begin something that would as a system, tie the Metro together as a greater single entity.

It’s helluva lot cheaper (60-70%) to build & operate than a streetcar …easier to maintain, monitor & police, …and it’s scenic, romantic, and festive during holidays, especially at night!    During the rest of the year, it can be very unobtrusive at night; not that streetcar.

Numerous South American & European cities have known this for decades.

It links with the existing streetcar taking riders into downtown Tucson; what could be better? …a “Two-Fer experience”; down the mountainside of north central Tucson to the edge of downtown, and then via the streetcar nobody presently rides, thru the university into the inner city.

Lest anyone think this tram would be some tacky piece of techno-kitsch, let me remind you I went to Dubai every other week for almost 2 years, and I also have a graduate degree in Architecture.  I don’t do techno-kitsch.  This could be as way-cool as a Tesla or Lucid.  We might be able to run the whole thing on solar power during the day.

Tucson needs something unique that ties the entire Metro together, and when you ain’t got no moo-laa ($$$), you have to get creative.   Going to all that expense to rebuild a new downtown—AND you think people are going to want to be there, but it has to be easy for that to happen.  Especially for people with money to spend, who already live here.  Duh-Oh!

In one swoop, a Tucson overhead tram system would undo years of Metro transport-retardation, brought on by the UA groupies who torpedoed the cross-town freeway in the late 1980’s.

If there’s a lesson here …do the opposite of what UA recommends, and you’ll generally be successful.