Tucker gives the Republican response to white nationalists: Gaslight, lie, and identify with them 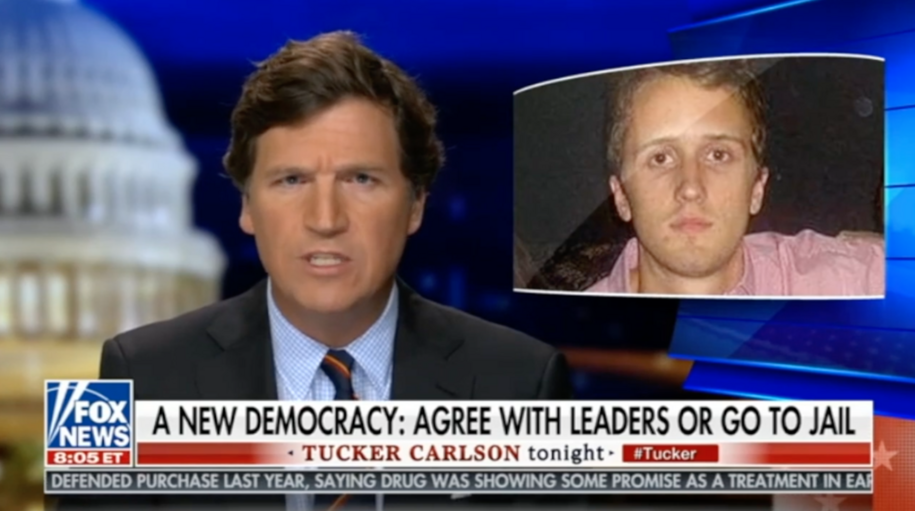 The indictment of Mackey is noteworthy, not least because Republicans have claimed—without any evidence—throughout the past four years that Democrats have engaged in massive vote fraud, and yet we are presented with yet another example of very real vote fraud undertaken on behalf of Donald Trump.

It details how Mackey and his cohorts—which included Tim “Baked Alaska” Gionet, another alt-right troll who was arrested last week for his role in the January 6 insurrection at the U.S. Capitol—coordinated an online scheme in which they targeted Democratic voters with a scam convincing them they could vote online. The voters were told they could vote for Hillary Clinton simply by posting a specific hashtag on Twitter or Facebook, or by sending a text with her name in it to a specific phone code.

Mackey, an unrepentant racist on Twitter, made no bones that his personal agenda was primarily to “limit black turnout,” the complaint says. As HuffPost’s Luke O’Brien details, Vaughn was working with some of the worst of the worst:

The complaint lists four co-conspirators referred to only by Twitter “user IDs,” a unique string of numbers assigned to each Twitter account. HuffPost can report that one co-conspirator is a prominent alt-right botmaster who goes by “Microchip” and was instrumental in making pro-Trump and anti-Hillary Clinton hashtags and content go viral on Twitter during the 2016 election. A fascist accelerationist who has expressed admiration for Adolf Hitler and Nazism, Microchip claims to have been involved in the early spread of the QAnon conspiracy cult and repeatedly told this reporter that his goal was to destroy the United States.

“Ricky Vaughn” was not just your average troll, either. As the DOJ explained in its press release on the case, he had a large Twitter following of about 58,000, but his influence was very broad. It notes: “A February 2016 analysis by the MIT Media Lab ranked Mackey as the 107th most important influencer of the then-upcoming Election, ranking his account above outlets and individuals such as NBC News (#114), Stephen Colbert (#119) and Newt Gingrich (#141).”

Then in November 2016, Twitter banned “Ricky Vaughn,” along with a number of other white-nationalist accounts, and his influence vanished practically overnight. Then, his identity was revealed during a spat with white-nationalist politician Paul Nehlen, and in short order his past as a Middlebury College grad, his employment in the financial sector in Manhattan, and other personal details all came to light in a HuffPost profile.

“What Mackey allegedly did to interfere with this process—by soliciting voters to cast their ballots via text—amounted to nothing short of vote theft,” remarked William F. Sweeney Jr. of the FBI’s New York Field Office in the DOJ press release. “It is illegal behavior and contributes to the erosion of the public’s trust in our electoral processes. He may have been a powerful social media influencer at the time, but a quick Internet search of his name today will reveal an entirely different story.”

Unsurprisingly, Carlson’s instantaneous defense of Mackey after his arrest Sunday omits all of this information, and tries to portray Mackey as a harmless meme-wielding prankster and the scheme as simply “making fun of Democrats.”

It was a performance not only perfectly aligned with Carlson’s running claims that the threat of the white-nationalist right is a “hoax,” but likely as well a preview of how Republicans and conservatives will be approaching the issue: namely, by gaslighting the public into believing that what happened on January 6 in the U.S. Capitol didn’t really happen.

But Carlson’s defense of Mackey, as well as his general campaign to convince the public that white nationalists pose no threat to American democracy, is also veering into the same kind of self-own that conservatives used—successfully—in 2009 to trample an earlier attempt by the nation’s law-enforcement apparatus to tackle the radical right. That was when the Department of Homeland Security released a bulletin to law-enforcement agencies warning of a resurgence of radical-right organizing and recruitment, and right-wing media (led by Fox News) shrieked hysterically that the bulletin was an “indictment of conservatives” and an “attack on the tea party.”

Carlson has been saying essentially the same thing this week, identifying ordinary conservatives and Fox News watchers with the white nationalists who invaded the Capitol on January 6. On Monday he ran a clip of Congressman Adam Schiff commenting on the need for a swift response by law enforcement to the takeover:

Schiff: We have been urging for some time that the FBI and Department of Homeland Security raise the priority to domestic terrorism to white nationalism as it threatens the country. And we’re going to continue sounding the alarm and make sure they’re devoting the resources, the time, the attention, just as we did after 9/11 to the threat from international terrorism, we need to give the same priority and urgency to domestic terrorism.

Carlson then launched into a tirade that directly identified his audience with those domestic terrorists, claiming that Schiff was talking about ordinary Republicans:

Got that? Vote the wrong way and you are a jihadi. You thought you were an American citizen with rights and just a different view. But no, you’re a jihadi. And we’re going to treat you the way we did those radicals after 9/11. The way we treated Bin Laden. Get in line, pal. This is a war on terror.

On the same broadcast, Carlson offered a similar defense of the QAnon cult, portraying their counterfactual and reality-bereft conspiracy theories as mere political beliefs, and attempts to expose and counter their smears, falsehoods, and violent agenda as part of a liberal scheme to enforce a kind of thought control.

“Once politicians attempt to control what you believe, they are no longer politicians. They are by definition dictators,” he intoned, and then went on to charge that “they have all, almost every one of them, joined the mob of censors, hysterics, and Jacobin destroyers, all working on behalf of entrenched power, to take total control of everything.”

Carlson’s rhetorical gambit on Monday was essentially a kind of hard-nosed gaslighting, insisting that what ordinary people see emanating from the radical right can all just be explained away if you frame it in benign enough terms. But on Tuesday, he didn’t simply whitewash the reality, he resorted to outright baldfaced lies in rising to defend Douglass Mackey.

His opening line, in fact, was utterly false: “Mackey is a 31-year-old conservative journalist from Florida,” Carlson said. In fact, Mackey is not any kind of journalist at all; he has never published any piece of journalism at any publication, having in fact been an economist at John Dunham & Associates until 2016. Carlson clearly wanted to make this all about the First Amendment, even if the facts inconveniently did not fit.

At 7 a.m. FBI agents showed up at Mackey’s house. They threw him in handcuffs and they dragged him to a cell. He now faces ten years in prison. His crime? He made fun of powerful Democrats on social media.

As the federal criminal complaint puts it, ‘Mackey made coordinated use of social media to spread disinformation relevant to the impending 2016 presidential election. The disinformation spread by these individuals, the Biden administration solemnly proclaimed, often took the form of memes.’

Yes, memes. Online mockery. Mockery online is now illegal if it’s aimed at the wrong people. Doug Mackey hurt their feelings, so they put him in jail.

According to Joe Biden’s Justice Department, Doug Mackey violated 18 U.S. Code Section 241. He did this by tricking people, like the dastardly trickster that he is, into not voting in the presidential election. What’s interesting is that prosecutors showed no evidence whatsoever that Doug Mackey actually tricked anyone into anything, voting or not. Not a single person.

This is just risibly, utterly false. Right in the DOJ’s press release/statement on the case, prosecutors explain that a substantial number of people were gulled by Mackey’s scam: “On or about and before Election Day 2016, at least 4,900 unique telephone numbers texted ‘[Candidate’s first name]’ or some derivative to the 59925 text number, which was used in multiple deceptive campaign images tweeted by the defendant and his co-conspirators.”

And of course, it would not be a complete Tucker Carlson episode without completely whitewashing who and what “Ricky Vaughn” was, as online entities go: “By the way, we have no ideas what Mackey’s views are,” he sniffed. “We don’t care. What CNN is telling us is those views are a crime.”

In fact, the crime with which Mackey is charged only incidentally involves his views, and of course revolves entirely around his efforts depriving Black citizens of their vote by deception, which is a federal felony. But it also is important for the public to understand what depraved beliefs motivated Mackey to commit these crimes along with other white nationalists—particularly the vicious anti-Semitism and relentless racial and ethnic bigotry.

Media Matters’ Nikki McCann Ramirez provides a number of examples of the ugliness of Mackey’s memes—the same memes that Carlson laughs off as harmless pranks, and dismisses as insignificant. These memes ran the gamut of bigotry: misogynist, homophobic, nativist, racist, and deeply anti-Semitic.

As Sarah Posner and I noted in our Mother Jones report on Trump’s interactions with the alt-right and other extremists, he was among the top influencers spreading the white-nationalist “white genocide” hashtag. Meanwhile, three members of Trump’s inner circle followed “Ricky Vaughn” on Twitter, and his son Donald Trump Jr. sometimes retweeted him.

But Carlson saved his most hysterical rhetoric for the end of his rant:

What, you may be wondering, does a case like this mean for the First Amendment? Well, it means that it’s effectively suspended. You can now be arrested for saying the wrong things. And at 7 a.m. this morning, one journalist actually was arrested for that. Almost no one tonight seems to be defending him. ‘He had bad thoughts! He deserves it!’ They think it’s OK. And that shouldn’t surprise you. Because we’re clearly living under some form of martial law at the moment.

This new version of democracy is a democracy where everyone fervently agrees with the people in power or else they go immediately to jail. Doug Mackey’s problem, it turns out, is that he doesn’t properly understand what democracy is.

… You may have thought you were a decent American in good standing. Ten years ago, nobody in this country would have called your views extreme. They weren’t extreme then. You don’t think they’re extreme now, you’ve always considered yourself a pretty moderate person—live your life and get along with others. Oh ho, that’s not possible now—because the rules have changed. You are now a dangerous insurgent. You are no different from a bloodthirsty Pashtun in Helmand Province, or an ISIS terrorist in Erbil! You’re part of a guerrilla insurgency.

So there you have the essence of the gathering Republican response to any kind of effort to confront the right-wing extremism that fueled the January 6 insurrection: When you crack down on white supremacists and far-right domestic terrorists, you crack down on ordinary Republicans.

Carlson has not been alone. Kentucky Senator Rand Paul attacked Joe Biden’s inauguration speech, in which he called for confronting domestic terrorism, as “thinly veiled innuendo” targeting Republicans. “Calling us white supremacists, calling us racists, calling us every name in the book,” he said on Fox News.

It’s a strategic response, in fact, that—despite its seemingly obvious self-indictment, not to mention its complete estrangement from the actual wording of the accusations—worked well in 2009, when Fox News-fueled hysteria forced DHS to ultimately withdraw and apologize for that domestic-terrorism memo that turned out to be so prescient today. And there’s little question that the law-enforcement failures that subsequently ensued over the next decade were directly related to that counterfactual hysteria.

Minnesota Attorney General Keith Ellison, who was a congressman at the time, told USA Today that the letter foreshadowed the events unfolding before us.