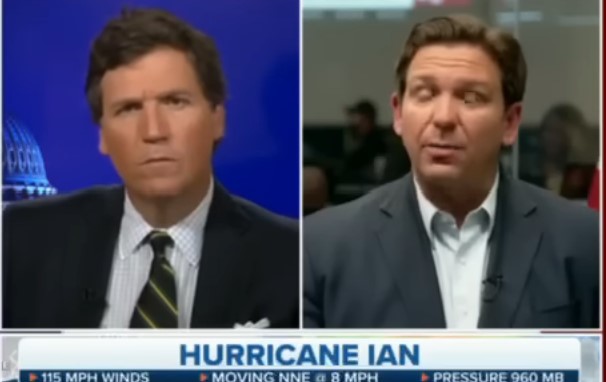 Ron DeSantis appeared on Tucker Carlson’s show, and Carlson looking for any chance to bash Biden. He offered up the perfect plate for DeSantis, prodding him. But unlike Trump, DeSantis was smart enough not to take the bait.

“When a natural disaster like this strikes the state, it is common; I think it’s always the case that the state receives federal aid, Given how politicized things are at the moment, are you confident you’re going to get the federal support Florida needs?”

Regardless, as said, DeSantis was too smart to sound so small:

“So I actually spoke with the president. He said he wants to be helpful,” DeSantis replied, echoing thoughts he shared on Hannity the previous night. “So we did submit a request for reimbursement for the next 60 days at 100%. That’s significant support. It’s a significant storm.”

“So we haven’t heard back from it. I’m actually cautiously optimistic that we do,” he added. Overnight, President Biden approved the major disaster request DeSantis referenced.

DeSantis finished on an even better note:

As you said, Tucker, we live in a politicized time, but when people are fighting for their lives, when their livelihood is at stake, lost everything, if you can’t put politics aside for that, you won’t be able to. I’ll work with anybody who wants to help the people of southwest Florida and throughout our state.

That this conversation even needed to take place is a testament to Tucker Carlson, who “could not put politics aside for that” and “won’t be able to” with anything. Yes, Tucker to a “T” and not the Tee with the issue set up to hit.

Overnight, @POTUS declared that a major disaster exists in Florida, and ordered his team to mobilize additional Federal resources to help the people of Florida recover from Hurricane Ian, including through assistance for temporary housing and home repairs. https://t.co/z4TZTLKRAG

@JasonMiciak believes a day without learning is a day not lived. He is a political writer, features writer, author, and attorney. He is a Canadian-born dual citizen who spent his teen and college years in the Pacific Northwest and has since lived in seven states. He now enjoys life as a single dad of a young girl, writing from the beaches of the Gulf Coast. He loves crafting his flower pots, cooking, and currently studies philosophy of science, religion, and non-math principles behind quantum mechanics and cosmology. Please feel free to contact for speaking engagements or any concerns.