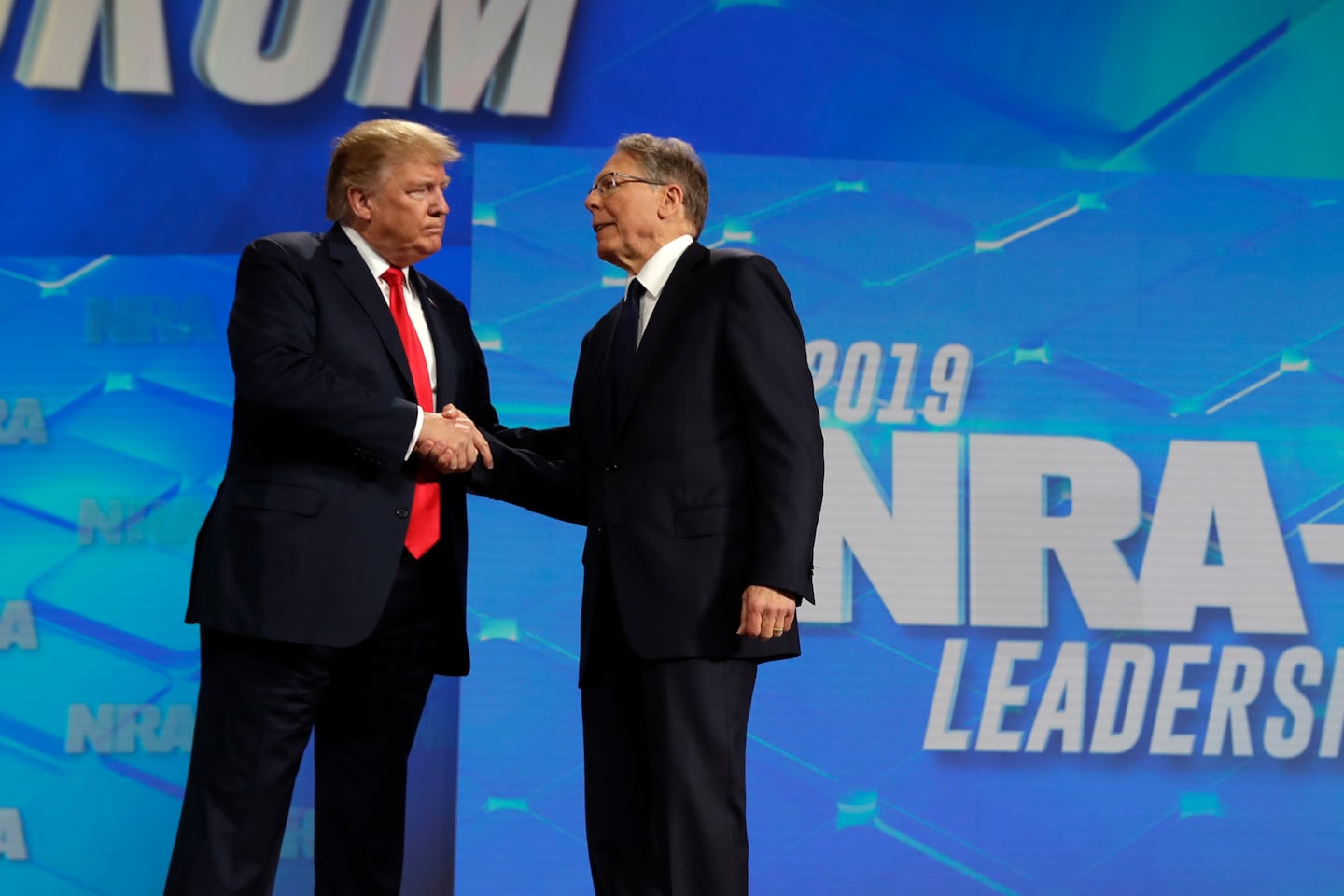 Former president Donald Trump will headline a forum at the National Rifle Association’s annual meeting in Houston this Friday — about a four-hour drive from where a shooting at an elementary school in Uvalde, Tex., killed at least 19 children and two teachers on Tuesday.

Trump said Wednesday he would keep the appearance, in a post on his Truth Social platform.

The Memorial Day weekend event is the year’s largest for the gun lobby meeting after cancellations due to the coronavirus pandemic. It’s set to take place over three days and “showcase over 14 acres of the latest guns and gear,” according to its official website.

“The National Rifle Association is pleased to announce that former President Donald Trump will headline a star-studded cast of political heavyweights at the NRA Institute for Legislative Action,” the body said in a statement in May.

Sen. John Cornyn (R) of Texas was also scheduled to speak but pulled out before the shooting for personal reasons requiring him to be in Washington on Friday, a spokesman said. Rep. Dan Crenshaw (R-Texas) likewise dropped his planned appearance for a trip to Ukraine, an aide said.

Beto O’Rourke, a Democrat challenging Abbott for governor, called on him to withdraw from the conference. Abbott’s office did not respond to requests for comment.

Governor Abbott, if you have any decency, you will immediately withdraw from this weekend’s NRA convention and urge them to hold it anywhere but Texas.

Noem’s spokesman said she was still planning to attend.

Virginia Lt. Gov. Winsome Earle-Sears (R), a former Marine who strapped an assault rifle over her dress in a memorable campaign ad last year, is scheduled to headline an NRA Women’s Leadership Forum Luncheon Friday as part of the event in Houston. Earle-Sears and her spokeswoman did not immediately respond to inquiries Wednesday about whether she plans to go ahead following the school shooting.

The NRA forum comes as the shooting reignites debate over gun control in Washington. President Biden called for the United States to “stand up to the gun lobby” in the wake of the deadliest school shooting in nearly a decade, and Senate Majority Leader Charles E. Schumer (D-N.Y.) moved Tuesday evening to put two House-passed gun-control bills on the chamber’s calendar.

The NRA could not immediately be reached for comment early Wednesday about whether the event will go ahead.

Biden voices grief and anger at shooting: ‘I am sick and tired of it’

Authorities said the suspected gunman, Salvador Ramos, 18, was wearing body armor and carrying a rifle, when he opened fire in a fourth-grade classroom around 11:32 a.m. on the third-to-last day of the school year — sending children fleeing for their lives. The gunman was later killed by law enforcement officials.

Sen. Chris Murphy (D-Conn.) went viral online after he gave a speech in the Senate on Tuesday night pleading with his colleagues to put politics aside and work together to stop mass shootings. Murphy was in the House in 2012 when a shooting took place in his district, at Sandy Hook Elementary School in Newtown, where 20 children and six adults were killed.

“Why are we here if not to try and make sure fewer schools and fewer communities go through what Sandy Hook has gone through, what Uvalde is going through,” he said. “I am here on this floor to beg, to literally get down on my hands and knees and beg my colleagues: Find a path forward here.”

The Texas shooting also comes as the nation is still reeling from a mass shooting earlier this month in Buffalo, where a gunman killed 10 people in a racist attack at a grocery store.

Cruz tweeted Tuesday that he was “fervently lifting up in prayer the children and families in the horrific shooting in Uvalde.”

His message triggered a rebuke from Rep. Alexandria Ocasio-Cortez (D-N.Y.) who mentioned his attendance at the NRA event and said “faith without works is dead.”

Aren’t you slated to headline a speaking gig for the NRA in three days – in Houston, no less?

You can do more than pray. Faith without works is dead. https://t.co/NMX64KljhL

The NRA event is due to take place at the George R. Brown Convention Center in Houston on Friday and has been billed as a “celebration of American freedom!”

“It is truly an honor to have President Trump address NRA members for the sixth time at our 2022 NRA-ILA Leadership Forum in Houston,” said NRA Executive Vice President and CEO Wayne LaPierre in the May statement.

He said Trump had “helped ensure the freedom of generations of Americans,” by appointing judges who “respect and value the Constitution and the Bill of Rights” and thanked the former president for his “support for our right to keep and bear arms.”

Trump has embraced the gun lobby, though after the Parkland high school shooting in 2018, he briefly expressed support for background checks for gun purchases and greater police power to seize guns from mentally disturbed people. He faced significant resistance from the NRA and Republicans and soon abandoned the ideas. His administration also banned the use of bump stocks, a device that makes it easier to fire a semiautomatic rifle more rapidly.

The NRA is fighting a lawsuit by the New York attorney general accusing the group’s executives of misspending millions of dollars. The NRA, established in 1871, boasts more than 5 million members.

Laura Vozzella contributed to this report.