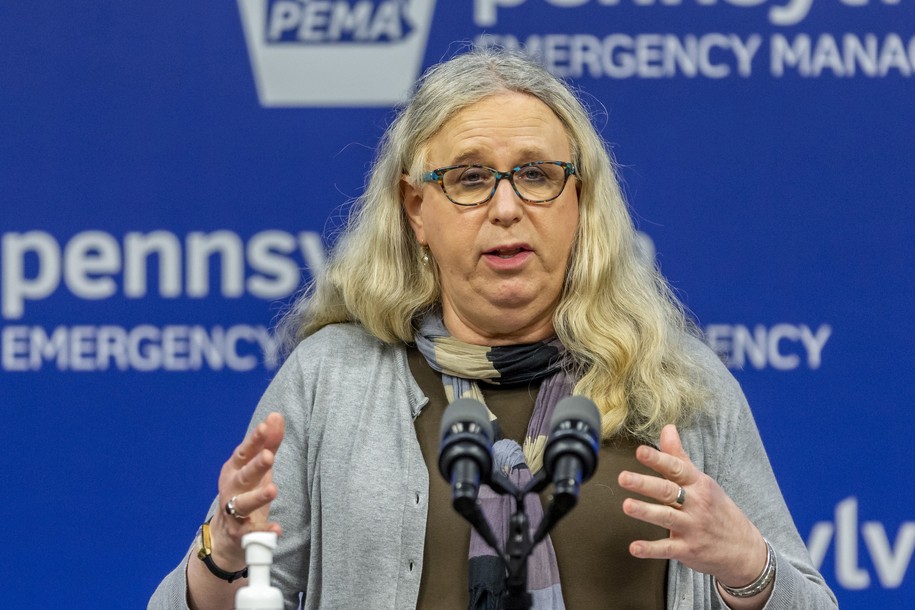 First, for perspective, here’s a snippet of Levine’s totally normal, even mild, opening: “As the assistant secretary for health, I would be committed each day to helping the people of our nation and improving our public health,” Levine said in her opening statement. “I am both humbled by the opportunity and ready for the job.” Lovely.

Now, here’s the energy the senator from Kentucky unleashed about an hour into the hearing. See how many anti-trans buzzwords and catchphrases you can pick out of what he said.

“Most genital mutilation is not typically performed by force,” he continues. “But, as the WHO notes, but by social convention, social norm. The social pressure to conform. To do what others and have been doing. As well as the need to be accepted socially. And the fear of being rejected by the community.” Do you have a sense of where we’re going? Currently, we’re tumbling into anti-trans rhetoric dressed up as false concern and precisely worried hysteria.

Now for Paul’s big finish: “American culture is now normalizing the idea that minors can be given hormones to prevent their biological development of their biological secondary sexual characteristics.” After a deep breath, Paul then addresses Levine specifically, saying, “You have supported minors to be given hormone blockers to prevent them from going through puberty, as well as surgical destruction of a minor’s genitalia.

Like surgical mutilation, hormonal interruption of puberty can permanently alter and prevent secondary characteristics. The American College of Pediatricians reports that 80 to 95% of pre-pubertal children with gender dysphoria will experience resolution by late adolescence if not exposed to medical intervention and social affirmation. Dr. Levine, do you believe that minors are capable of making such a life-changing decision as changing one’s sex?”

Phew! That is a very, very long statement filled with bad faith arguments and anti-trans misinformation. First of all, genital mutilation (like castration and female circumcision, for example) and gender-affirming care are not the same thing, though you will likely hear the genital mutilation phrase quite a bit in anti-trans circles.

Speaking of anti-trans circles, people are not, in fact, pressuring youth to transition en masse. Celebrating openly transgender people in media and in real life does not force anyone into transiting. Nor does offering up your pronouns, letting people use the bathroom of their preference, or, of course, letting trans kids play on the appropriate sports teams.

While gender-affirming health care is incredibly important for people of all ages, it’s generally understood that in the case of gender, social transitioning (for example, perhaps changing one’s name, pronouns, or style of presentation) is an early option. Medical intervention, like hormonal treatments, are generally an ongoing conversation with one’s specific medical team, as any other health issue would be.

If you’d like to listen to Paul’s long, terribly anti-trans questioning, you can do so below.

With the above clip going viral on Twitter, it’s especially important to focus on what Paul said. Not because any of it is good or reasonable, of course, but because part of allyship is recognizing where veiled or latent transphobia and bad faith lines of attack exist. When it comes to transgender health care, the anti-trans buzzwords as of late include, as you might have guessed, “genital mutilation,” “life-changing,” and, as Paul also briefly brought up, “infertility” concerns.

Levine replied calmly, saying, “Transgender medicine is a very complex and nuanced field with robust research and standards of care that have been developed. If I am fortunate enough to be confirmed as the assistant secretary of health, I will look forward to working with you and your office and coming to your office and discussing the particulars of the standards of care for transgender medicine.” Zing!

Later, Paul tried another line of attack in his smear campaign, saying, “I’m alarmed that you’re not saying they should be prevented from making decisions to amputate their breasts or genitalia … We have always said that minors do not have full rights … Will you make a more firm decision on whether or not minors should be involved in these decisions?”

To this, Levine repeated her previous answer about transgender health care being complex and that she’d be happy to speak with his office about developing standards of care in the future. Ah, the satisfaction of not taking the bait and engaging with a bad faith-gotcha line of attack.

And speaking of awareness and allyship, don’t forget that it was just earlier today that QAnon Congresswoman Marjorie Taylor Greene yet again showed her true colors by misgendering a colleague’s transgender daughter on Twitter—and hanging a particularly repulsive anti-trans sign outside of her office.

You can check out Levine’s opening statement below.