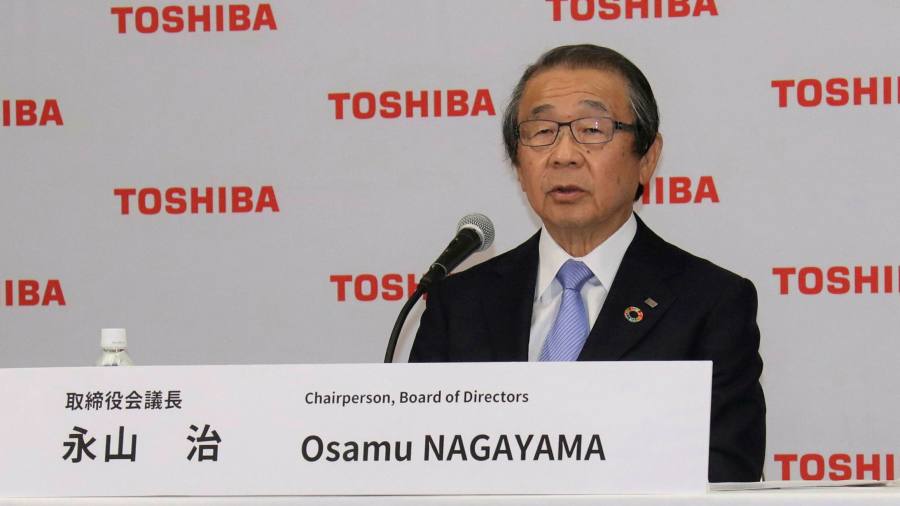 The chair of Toshiba’s board has rebuffed shareholder calls to resign and stressed his role was to address the turmoil at the Japanese company as the conglomerate lurched deeper into a governance crisis.

Osamu Nagayama refused to quit as the company prepared for its second emergency shareholder meeting this year after the publication of an independent report that exposed collaboration between the company and the Japanese government to suppress activist investors.

The damning report, which included allegations that Toshiba executives had discussed “beating up” certain shareholders with officials from the Ministry of Economy, Trade and Industry, concluded that Toshiba’s 2020 annual meeting had not been fairly run.

The probe also alleged that Yoshihide Suga, Japan’s prime minister, had been directly aware of Toshiba’s anti-activist campaign last year when he was serving as the government’s chief cabinet secretary. Suga has denied the claim.

Nagayama used a 75-minute press conference on Monday to lay the blame for Toshiba’s crisis on Nobuaki Kurumatani, the former chief executive who was forced to resign in April. The underlying cause of the company’s miseries, he said, was the “somewhat confrontational stance towards shareholders” fomented by Kurumatani.

Nagayama acknowledged the calls for his resignation and admitted governance shortcomings at a company that has endured an accounting scandal, a brush with bankruptcy and a humiliating demotion to the second section of the Tokyo Stock Exchange since 2015.

“The board needs to respond to the situation by normalising operations as soon as possible,” he said, adding that his responsibility was to deal with the turmoil.

Nagayama’s comments came as Institutional Shareholder Services, the proxy advisory service, said it would recommend that shareholders vote against his reappointment as chair at next week’s AGM.

A big investor was “simply shocked” by Nagayama’s comments, the lack of an apology and his failure to hold himself accountable despite overseeing the board and the nominations committee.

One of Toshiba’s largest shareholders said Nagayama “sounded like a tourist” and had offered no clarity on why he thought he was fit to lead the organisation.

Nagayama’s press conference followed a marathon emergency Toshiba board meeting on Sunday, which was described by one of its members as involving several heated clashes as the company worked out its next moves.

After the meeting, Toshiba said it would remove two of the people it had nominated as board directors from its recommended slate. Both men were members of the audit committee that concluded there was no wrongdoing surrounding last year’s AGM. The independent report directly contradicted this finding.

ISS responded to Toshiba’s revised director nominations by saying Nagayama “bears the greatest responsibility in nominating candidates, and has the ultimate responsibility for the conduct of the board”.

“Shareholder concerns will be aggravated as he will continue to be the chair of the board after this [AGM],” it added.

Shares in Toshiba rose 2.7 per cent on Monday.