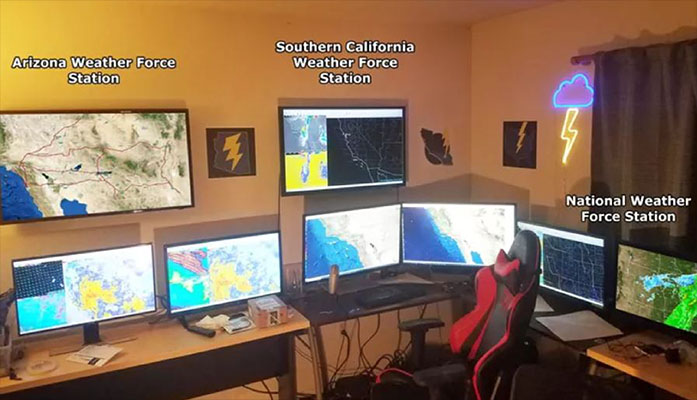 A self-professed meteorologist from California with more than 50,000 Facebook followers and a penchant for threatening naysayers posted last week that Cochise County was under a tornado watch, prompting a “panic inducing” response from the public, particularly parents and school officials.

One longtime trained weather watcher believes it is the community which needs a warning and he has reached out to Cochise County Sheriff Mark Dannels about his concerns.

In his letter to the sheriff, Skywarn observer Donald Lowery noted his concern with recent postings by Kevin Douglas Martin on the Arizona Weather Force website about potentially tornadic weather in southeast Arizona. And Martin’s forecasts should not be simply brushed off as a harmless hoax, according to Lowery.

Martin’s Aug. 3 postings about the possibility of a tornado developing in southeast Arizona was not the first time Lowery had concerns about the Arizona Weather Force forecasts. Lowery was aware of a prediction Martin made a few weeks earlier that Hurricane Estelle would come through Cochise County bringing a massive rainstorm.

“I saw this was clearly wrong,” Lowery said, citing his Skywarn training. Then on Aug. 3 when the Arizona Weather Force website began raising the alarm about tornado activity in Cochise County, “I took it upon myself to look further into this person, as again I knew it was false information,” Lowery told the sheriff.

One of the first things a newcomer finds when looking into Martin is the cover photo used on Facebook by Arizona Weather Force. It reads in part: “if you do not wish to die in weather Follow me and I’ll save your life one day.”

Supporters are also given an opportunity to become “members” of Martin’s various weather outlets.

Martin, who has described himself as a “consulting meteorologist,” has a nearly decade-long history of controversial activities under the umbrella of his National Weather Force. He has been challenged for several years about his claimed scientific and meteorological credentials, but insists it is his dream to operate a weather service “funded by the people” and not corporate sponsors.

However, staying informed of the latest weather alerts does not require a membership or subscription, Lowery advised. The NOAA’s National Weather Service is the sole official voice of the U.S. Government for warnings of hazardous weather, and provides timely and accurate forecasts for free.

Martin has posted that the National Weather Service “is possibly the worst forecast service due to their lack of knowledge because most are interns from other states.”

He is also aware of the cynics and critics, as evident by another Aug. 3 Facebook posting in which he chastised those who question his efforts.

“If it is a news person, they are only there for being a talking head and views, not knowledge,” he posted. “If it is NWS, they are at war with me so are bias…Those types of comments take away from the severity of a focus spot I give – and puts my viewers in danger so tone that down, thanks.”

In 2015, Martin gained some notoriety -and the attention of the FBI- after making comments which officials with the National Weather Service took as potential threats. He even admitted to an FBI agent of harassing the agency by using various accounts and identities.

One posting Martin shared at the time noted he walks “that fine line of delivering threats in a way that cannot ever be convicted.” He added that if he was prosecuted, he would act as his own attorney because “no attorney can be as tough as I can be knowing what freedoms we all have in this country and what this country stands for.”

Martin, who appears to also post under the moniker Raiden Storm or R Storm, has had various Facebook pages shutdown in the past. Critics of his recent tornado posting point out there has been no new postings on several of Martin’s pages since Aug. 3.

A few years ago, Martin caused a panic in some communities along the U.S. gulf coast when he issued a hurricane warning with likely path 10 days in advance. Several meteorologists pointed out that meteorological software programs cannot accurately forecast at the level of a warning so many days in advance.

The NOAA National Hurricane Center was compelled to issue a statement contradicting Martin’s claims. And the National Weather Service took the rare step of cautioning the public about unofficial weather forecasters, as did The Weather Channel.