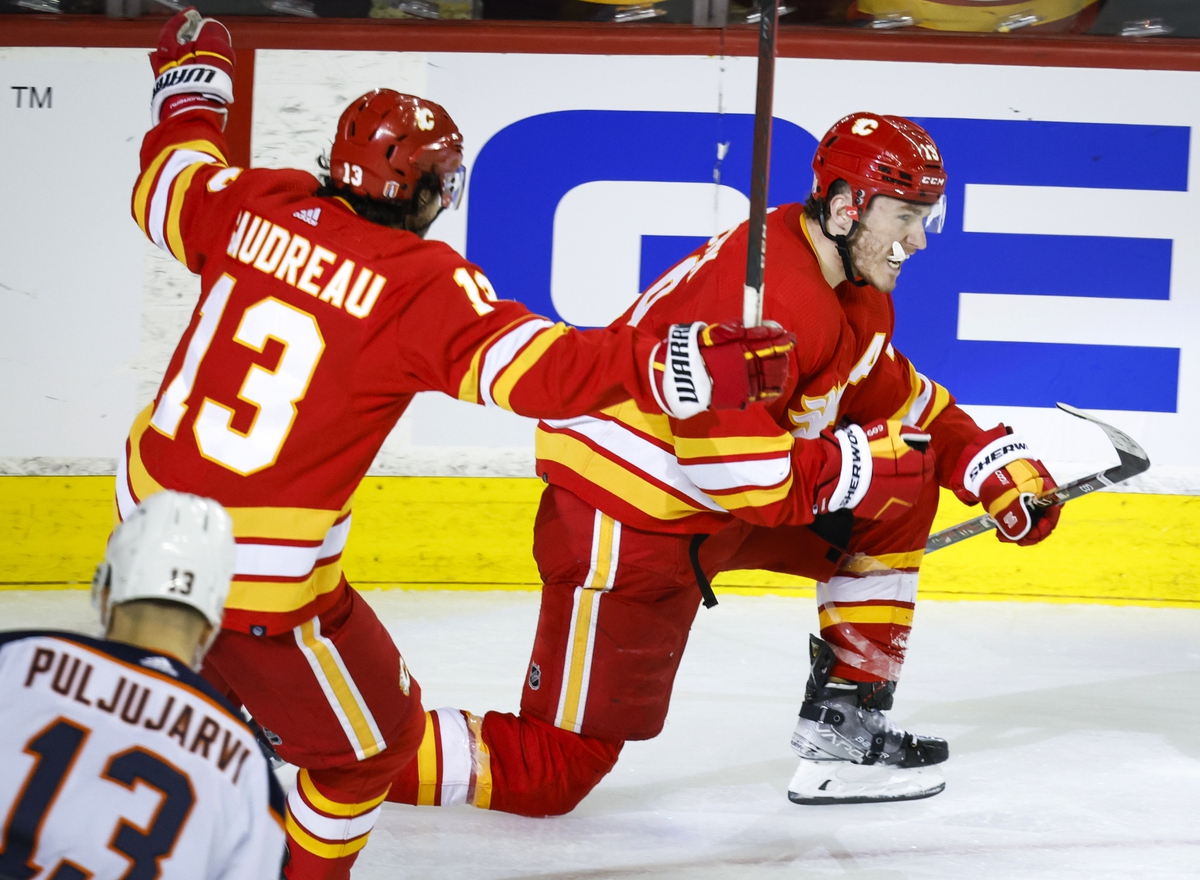 Calgary Flames forward Matthew Tkachuk, right, celebrates his goal against the Edmonton Oilers with forward Johnny Gaudreau during the third period of Game 1 Wednesday, May 18, 2022, in Calgary, Alberta.

Blake Coleman scored twice for the Flames. Rasmus Andersson and Andrew Mangiapane each had a goal and two assists, and Elias Lindholm and Brett Ritchie also scored. Jacob Markstrom stopped 22 shots for the win.

Zach Hyman scored twice for Edmonton, and Connor McDavid had a goal and three assists for his fourth straight multi-point game in the playoffs. McDavid leads the league’s postseason points race with five goals and 13 assists. Leon Draisaitl had a goal and two assists and Kailer Yamamoto and Evan Bouchard also scored for the Oilers.

Edmonton starter Mike Smith was pulled in the first period after allowing three goals on 10 shots. Mikko Koskinen made 32 saves in relief.

The winner of the best-of-seven series advances to the Western Conference final. Game 2 is Friday at the Saddledome before the series heads to Edmonton for Sunday’s Game 3 and Tuesday’s Game 4.

In a matchup of potent offenses, the question ahead of the series was which team could keep the puck on its sticks and spend more time in the offensive zone. Calgary dominated that department early. The Flames scored twice in a 25-second span in the first minute and led 3-0 by 6:05 when Smith was replaced by Koskinen.

Calgary’s two goals in the opening 51 seconds was the fastest two goals to start an NHL playoff game, and electrified a sea of red dotted with Oilers orange and blue at the Scotiabank Saddledome.

The Oilers would not go quietly, however.

The Flames had survived a goaltender-dominated, grinding series with the Dallas Stars in the first round.

Game 1 of this series was, by contrast, an open-ice track meet of mediocre goaltending. The Flames held a 40-18 edge in shots after two periods, but led 6-5 heading to the third.

Andersson regained the lead for Calgary at 2:57. Mangiapane from behind the net fed the all-alone defenseman whose wrist shot beat Koskinen’s glove.

Tkachuk gave the Flames a two-goal lead at 8:55 with his second of the night. He snared Draisaitl’s turnover at the blue line and beat Koskinen five-hole on a breakaway.

Tkachuk scored into an empty net to complete his hat trick. Hats rained down onto the Saddledome ice and chants of “we want 10” goals soon followed.

Coleman struck 45 seconds into the second period and again at 6:10 to push the Flames’ lead to 5-1. He put a rebound over a prone Koskinen during a scramble around the crease for his first, and redirected Noah Hanifin’s shot for his second.

Bouchard converted McDavid’s pass at 7:10, and Tkachuk batted in a rebound for a power-play goal at 8:24 after Edmonton’s Zack Kassian was sent off for roughing.

Hyman scored at 9:38 and 14:06 to pull the Oilers within two. He fired a shot between defenseman Michael Stone’s legs that deflected off Markstrom and into the top corner for his first and circled out from behind the net and whipped the puck by Markstrom’s glove for his second.

Draisaitl made it 6-5 with 39 seconds left in the second when he beat Markstrom far side on an odd-man rush with McDavid.

Lindholm converted Calgary’s first shot of the game into a goal 26 seconds in as he settled a bouncing puck off a cross-ice pass from Rasmus Andersson and swept it far side over Smith’s glove.

From behind the net, Backlund fed an undefended Mangiapane in the slot to beat Smith from close range at 51 seconds.

Ritchie scored his first career playoff goal at 6:05 to make it 3-0. He knocked Edmonton’s Evander Kane off the puck at the Oilers’ blue line, reached to collect the loose puck and got a shot away under Smith’s arm.

McDavid glided in front of the net and patiently waited for Markstrom to commit before tucking the puck between the goalie’s pads at 7:41 of the first to get Edmonton on the scoreboard.

The Flames were missing top shutdown defenseman Chris Tanev a second straight playoff game. He was injured in Game 6 of Calgary’s first-round series against Dallas. Tanev skated in both Tuesday’s practice and in Wednesday’s morning skate, but did not dress for Game 1.

NOTES: With his 94th career playoff win as a coach, Darryl Sutter joined Pat Quinn ranked No. 6 all-time. … With three assists in Game 1, Johnny Gaudreau joined Jarome Iginla and Martin Gelinas (2004) among Flames players to have a six-game point streak in the playoffs. … McDavid was the first Oilers player to score a goal in four straight postseason games since Michael Peca and Shawn Horcoff in 2006. … Game 1 was the highest scoring playoff game involving Calgary and Edmonton, surpassing the previous high of 12 goals scored in Game 3 of the 1983 Smythe Division final.