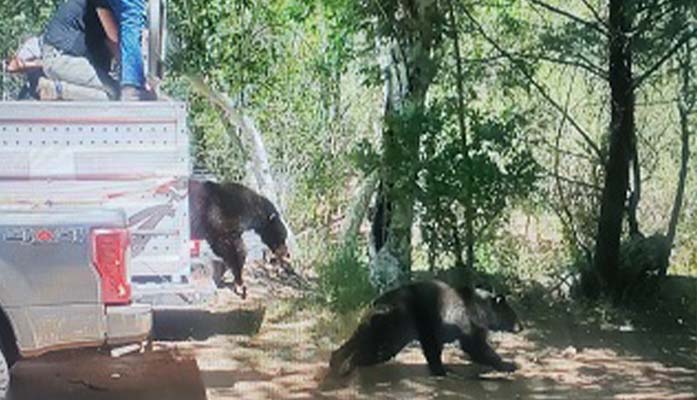 Arizona Game and Fish Department (AZGFD) biologists released three juvenile male black bears back into the wild after months of rehabilitation at the Southwest Wildlife Conservation Center in Scottsdale.

Two of the bears were orphaned early last year when the sow was fatally injured by a vehicle collision, and they were taken to Southwest Wildlife by the Navajo Nation. The third was found orphaned in southeastern Arizona in October and was captured by an AZGFD wildlife manager. After efforts to locate the sow proved unsuccessful, it was transported to Southwest Wildlife.

“Our agency has a history of successful partnership efforts with Southwest Wildlife,” said Dustin Darveau, terrestrial wildlife specialist for AZGFD’s Mesa region. “The center has the knowledge and experience working with young bears, along with the facility to handle them in a secluded area with limited human interaction.”

Once these juvenile black bears showed proficiency in foraging and natural behavior methods during the rehabilitation process, they were considered ready for release back into the wild. The bears were tranquilized, given a final health assessment, and fitted with identification ear tags prior to being loaded into transport carriers and taken to an approved release site in suitable black bear habitat.

Two of the young bears were recipients of a prototype GPS ear tag that has solar capabilities to continually charge the very small batteries necessary for communicating with satellites. AZGFD hopes to receive location data to document the bears’ survivability, dispersal and habitat use, which provides valuable information for future bear management in Arizona.