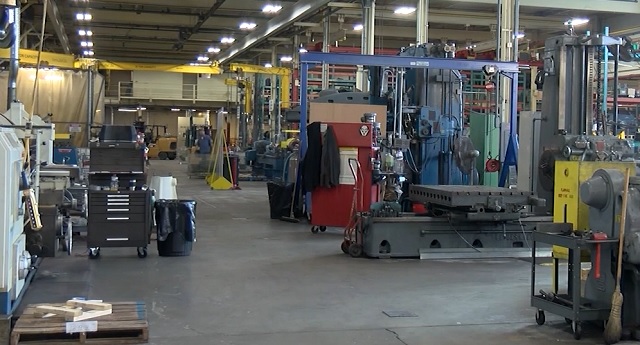 INDIANAPOLIS – In 1908, Americans stepped into Ford’s Model T and drove a stick shift; drivers now sit back as the car drives itself.

Automation isn’t new, but as technology advances, it puts thousands at risk.

“It’s very sad. You watch the equipment trickle out. You watch them tear things down, throw things away,” said Jason Waller. “It’s an experience I would not wish on anybody to go through that and see– it almost, in a way, makes you feel like all the years that you worked toward something were for naught.”

The 45-year-old tells FOX59 he’s one of eight final employees working the plant floor in Greencastle.
Hundreds of others were laid off earlier; now the same has happened to him, nearly 30 years after he started as a die setter.

“Starting over after all that time is definitely a little bit daunting,” he said.

He has no choice but to start over and many Hoosiers in these types of jobs will have to do the same.

The Bureau of Labor Statistics reports at least 42% of U.S. employees’ jobs are at high risk of automation; that same data shows nearly 310,000 Hoosiers in Central Indiana alone will be impacted.

Mohan Tatikonda with IU’s Kelly School of Business teaches his students about the 3 D’s companies consider ahead of automation.

“Pros are when we have work that’s difficult, dangerous, dull,” the operations management professor explained. “If it’s dirty or dangerous, we may not want to have workers doing it or doing less of it. If it is particularly dull– it’s easy to make mistakes and to get bored with the work. This is where automation and robotics and so forth have traditionally been applied. We can use these for cost reductions as well.”

As he explains, automation decreases company risks and increases employee productivity whenever the 3 D’s are present. Difficult, dangerous, and dull work have contributed to industry changes over the decades in Indiana.

FOX59 requested data from the Department of Workforce Development (DWD).

With more automation, those low wages won’t go up and instead those jobs will likely disappear.

“Generally, they’re going to have to increase their skillset to working with the equipment, programming the equipment,” Tatikonda advises, when asked how employees can be more employable and valuable in the workforce. “Who installs the robot? Who makes sure the robot is oiled? Who programs or re-programs the robot so it makes a slightly different product? Who makes sure parts and pieces get to the robot? So we need those people. We may not need as many workers as we did before, but we still need skilled workers who will work with this equipment.”

That type of skill takes more training and education, which many Hoosiers don’t have!

The Employer Training Grant will reimburse an employer for up to $5,000 per trained employee who is trained, hired, and retained for six months, up to $50,000 per employer.

FOX59 also researched state data showing 90 percent of Hoosiers, 45 to 64-years-old, have a diploma or GED; only 26 percent have Bachelor’s degrees or higher.

For someone like Waller, more job training and education means not just a competitive edge and stability, but also major income growth.

“I think there can always be more education,” the 45-year-old said. “Automation is going to happen it’s just a matter of us changing with it and investing in better education.”

This year, Governor Eric Holcomb launched his Next Level Agenda 2022, which would “skill up” Indiana’s workforce, and combat issues from automation and job loss.

It plans to create easier partnerships between local businesses and technical and/or vocational programs.
FOX 59’s Beairshelle Edmé made several requests to interview the governor about his plan, but his office declined, instead pointing to DWD or IEDC.

DWD and IEDC also declined to interview with FOX59 about this plan to invest in Hoosier employees, like Waller.

Waller plans to take training courses through a U.S. Department of Labor program, TAA, and then start his job search.