This week on The Brief: Experts and activists speak out on the student debt crisis 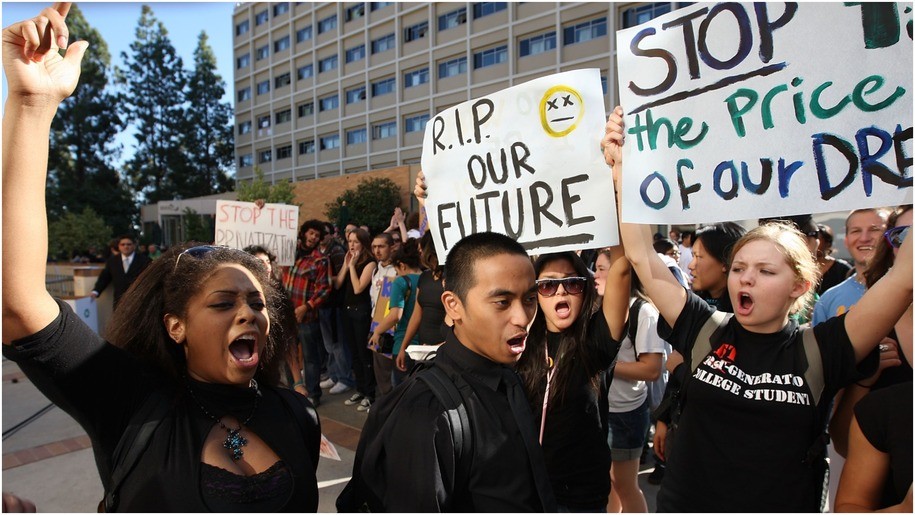 Political strategist and renowned student debt activist Melissa Byrne was this week’s first guest as Cara and Kerry discussed the shape and scope of the student debt crisis and how President Biden should confront the issue.

Cara shared a not-so-fun-fact: “40% of student debt borrowers didn’t even get a bachelor’s degree!”

Biden is on record as proposing a cancellation of $10,000 of student loan debt for each borrower via executive order, but is that enough? Why not cancel $50,000 of students’ debts?

For “simply having the audacity” to buy into the promise of affordable student loans and a capacity to repay them—a false promise for most, as it turns out—“people are now burdened with incredible student debt,” according to Cara.

Part of the issue is rooted in the cost of a college education, which has exploded over the past 20 or so years.

But this week’s discussion focused on the student debt crisis itself, and Melissa shared her experience with the issue as a part of Bernie Sanders’ presidential campaign and how she transitioned from working for one candidate to pushing the new president to adopt a position similar to Sanders’ on cancelling this debt.

While Biden has punted on the cancellation issue to date, one of his first actions as president was to extend the suspension of federal student loan payments through the fall, and his statements since indicate openness to at least some debt cancellation.

We should cancel student loan debt because we should never have had student loans in the first place. And I think that one thing that’s really important to understand about how we got here is that we used to have free college until … Ronald Reagan happened … Higher education [became] about wealth transfer within families. And centrist Democrats then had this bright idea that they way to get more poor people into college was to expand student lending … At the same time, we were getting the message that ‘You have to go to college.’

“We don’t need the government making money off of student lending,” Melissa added.

We have a whole generation of kids who should be our economic drivers and our biggest producers going forward for the next couple of decades that doesn’t allow them to start families, to buy homes, to be that economic force that generates and propels the economy forward.

She added, “I think that what people really miss” in the student debt conversation is debt forgiveness is “a rising tide that lifts all boats across the board.”

Melissa picked up that thought:

Warren and Schumer are pushing for Joe Biden to issue an executive order eliminating $50,000 of student loan debt. Biden has indicated his willingness to cancel $10,000 with the stroke of a presidential pen, which is a good start.

Kerry discussed politics of acting on this issue:

Young voters, voters under 30, turned out at a historic, disproportionate rate … and they voted two-to-one in favor of Biden, and in particular youth of color were instrumental … There are a whole lot of first-time voters who turned out … because they were moved by the fact that Democrats could do better, Democrats could run the government better, and the way to turn them into Democratic voters for life is to do something that demonstrably improves their lives.

This week’s second guest was Mike Pierce, the policy director and managing counsel at the Student Borrower Protection Center and an attorney and advocate who’s spent more than a decade fighting for student loan borrowers’ rights on Capitol Hill and at the Consumer Financial Protection Bureau.

“I think there’s an enormous political upside to being the ‘student debt president,’” he said, before dropping jarring—but true—bombshell:

Trump did more for student loan borrowers than any president in my lifetime.

He’s right, though: As part of efforts to alleviate the economic harms of the coronavirus pandemic, Donald Trump used executive orders to extend last spring’s moratorium on federal student loan payments from its expected expiration last September through January 2021. (Biden has since extended the moratorium through this fall.)

Mike was frank about the political facts of the matter:

The economy needs a shot in the arm … To unilaterally disarm on student debt is political malpractice.

Cara raised an oft-used argument against cancelling student loan debt: “Who’s going to pay for it? Where’s that money going to come from?”

Mike posits that no one actually has to pay for it.

There may be no clearer example of how protections for student borrowers just do not exist in any practical, meaningful way. Biden inherited a fundamentally broken student loan system.

Check out this week’s great episode for yourself:

The Brief is now streaming on all podcast platforms near you!