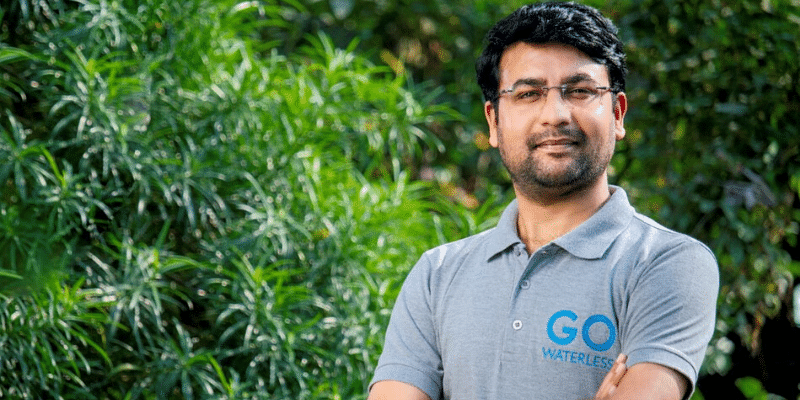 “To a thirsty man, a drop of water is worth more than a sack of gold,” reads an old adage. This cannot be more legitimate in today’s times where the rapidly growing urban spaces are placing severe pressure on water resources.

With innovation and technology, a lot can be achieved in meeting the challenge. Nitin Sharma from Maharashtra has done just that. The 36-year-old entrepreneur launched ‘﻿Go Waterless﻿’, an initiative that provides doorstep service in Mumbai and Nagpur to help individuals with car wash.

Nitin invented a plant-based high lubricity spray that can capture dust particles from the surface of automobiles without wasting a single drop of water.

“Almost 80 to 90 litres of water is used while washing cars at home through a pipe. If a bucket is used then 40 litres is consumed and at a service station almost 200 litres is used. When the quantity is multiplied by the total number of cars, which is at least 23 crore in India, it sums up to a whopping quantity of water. With GO Waterless, all the water which would have otherwise been depleted can be conserved,” Nitin Sharma tells SocialStory.

At present, 23 people are part of the GO Waterless team, and it claims to have a customer base of 1,000.

“I am looking forward to encouraging more people to save water by expanding my operations through the franchise model. The most recent addition was in Nagpur. Besides this, I am also planning to launch an Android app for bookings,” Nitin adds.

After experiencing acute water scarcity during summers year after year, Nitin and his wife, Kshama Sharma, launched GO Waterless. The initiative was started under the enterprise Rewowlution Ventures Pvt Ltd., in October 2019.

Nitin, who completed his BBA from the Institute of Advanced Studies in Education (IASE) in Rajasthan, took over his father’s automobile business. He was managing a mechanic workshop in Chhattisgarh and delivering battery and car services to people. During one of the sultry summers, he discovered there was no water in the borewell.

The team of GO Waterless cleaning the car using the lubricity spray.

“We had a tough time without water. The cars of our customers could not be washed. I had to explain the situation to the customers and apologise. After experiencing similar situations year after year, I decided to find a solution. I was researching and it occurred to me that a lot of water goes down the drain every time a vehicle is washed. That was when the idea of GO Waterless sprung in my head,” recalls Nitin.

In 2017, Nitin took the help of a few chemical engineers to develop a spray made of plant-based lubricants using nanotechnology. After a year of experimentation and deep dive into subjects like applied physics and super molecular chemistry, Nitin developed a lubricity spray that could remove the dirt from cars without using water.

He then pooled in Rs 10 lakh with assistance from his wife and family to start a venture of his own in Mumbai and incorporate the GO Waterless initiative.

The materials and plants required for its production are imported from Brazil. Every car wash requires approximately 100 ML of the spray, and till now, around 1,000 litres of spray has been produced.

The spray is also eco-friendly and non-corrosive. Hence, the various surfaces of the vehicle and layers of paint on it is kept intact. “Most importantly, since no water is used, I am hoping the initiative will revolutionise the way people wash their cars,” Nitin says.

From left to right, before the car being cleaned by GO Waterless and after the service.

“My idea was simple. I wanted to reach out to as many people as possible. So, I launched a web platform where anybody could book a car wash online. Once the booking is confirmed, a trained person is sent to the location to clean the automobile using the lubricity spray. The adhesive nature of its constituents is such that all the dust particles get absorbed easily,” says Nitin.

GO Waterless charges Rs 449 for a complete car wash, and charges Rs 249 for the outer wash. Promotional offers for both these services are presently applicable.

More than 35 residential colonies and societies have been availing the services of GO Waterless on a regular basis for the last few months. Gajanand Apartments in Nagpur is one of them.

Rakesh Singh, the Secretary of the Society, says,

“Nagpur has been facing water shortage for quite some time. Since the consumption of the resource is in the hands of the people themselves, I felt it is the collective responsibility of the citizenry to save water. When I first heard about the service of car wash without water, I did not believe it. But when they gave me a demo, I was spellbound. There are 27 flats at Gajanand Apartments and most of them avail GO Waterless today. I am sure the initiative will go a long way and help save plenty of water if adopted on a large scale.”

If seen in the context of rapid urbanisation, which is burdening the water resources, initiatives like GO Waterless can help in conserving water.

The team of GO Waterless.

According to a report released by the policy think tank NITI Aayog, around 21 cities across India including Bengaluru, Delhi, Hyderabad, and Chennai are under the threat of running out of groundwater by 2020. The problem does not end here. Research also says that 600 million people are being exposed to extreme water stress in the country and close to two lakh people have been losing their lives every year since 2018 due to water scarcity.

This dire situation is largely a result of careless water consumption patterns and wastage that results from it. It is estimated that every individual uses an average 135 litres of water every day at home itself. The amount of water used to wash cars and other vehicles is even more.