‘This is the year. This is the time’: Senators introduce bipartisan DREAM Act 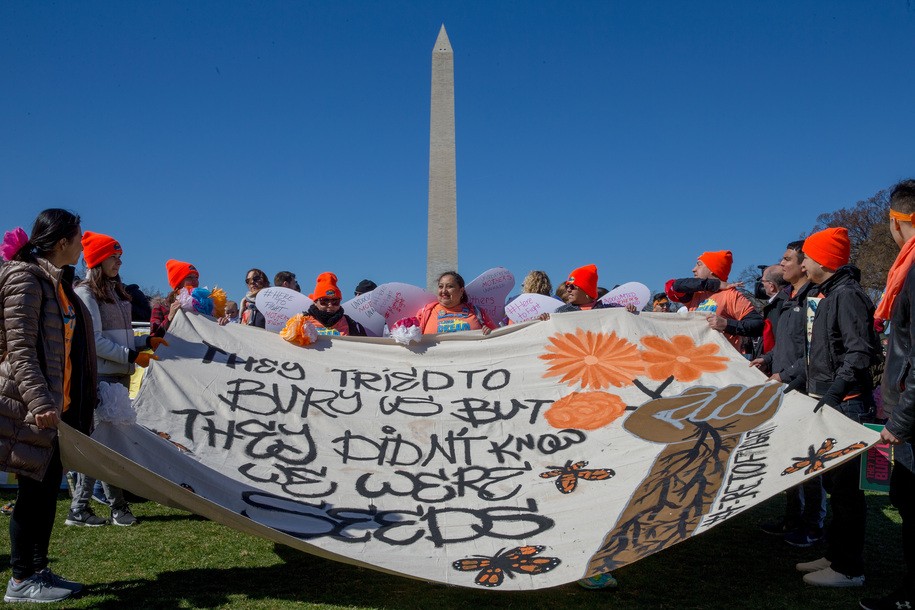 The fight for this legislation has been a long and oftentimes grueling one. While polling has previously found that the overwhelming majority of American voters want DACA recipients to stay in the U.S., the bill’s introduction this week marked the 20th year since the very first version of the DREAM Act was was first brought forward.

“The Dream Act was also included in the 2013 comprehensive immigration reform bill that Durbin and Graham coauthored as part of the ‘Gang of Eight’—four Democrats and four Republicans,” Durbin’s office said. “The 2013 bill passed the Senate on a strong bipartisan vote of 68-32, but the Republican leadership of the House of Representatives refused to consider it.”

Democrats in 2019 passed legislation that would put DACA recipients, along with Temporary Protected Status (TPS) and Deferred Enforced Departure (DED) holders, onto a path to citizenship after taking control of the House of Representatives in 2018, but it was stalled by then-Republican Senate Majority Leader Mitch McConnell. Following two U.S. Senate wins in Georgia that cemented Democratic control of the U.S. Senate, 2021 represents the best opportunity in years to finally put DACA recipients—and all 11 million undocumented immigrants—on a path to citizenship.

During his floor remarks Thursday, Durbin further commented on the vital role that hundreds of thousands of DACA recipients, like Ana, have played amid the novel coronavirus pandemic. A registered nurse in Utah, she’s traveled to California, Massachusetts, Idaho, and Texas to help care for patients.

Twenty years ago, I went to the Senate floor to introduce the #DreamAct for the first time. I’m proud to do it once again today. It’s time to finally fix our broken immigration system. https://t.co/wGuXoetY0b

“If we lost Ana and people like her in the middle of a pandemic, what would we be thinking?” Durbin said in his remarks. “So the fight is on for Ana and for hundreds of thousands just like her who simply want a chance to earn their way to legal status and citizenship in the United States of America.It would be a tragedy for us to turn away these brave, talented, and determined professionals in the midst of this pandemic. So we have to get to work in the Judiciary Committee and on the floor of the Senate. This is the year. This is the time. When we can come together and make a difference in the future of America.”

Young immigrants and advocates who have been fighting for permanent protections for years now celebrated news of the bill’s introduction. They urged legislators to pass the legislation that protects young immigrants without poison pill amendments that hurt other communities.

“The re-introduction of the DREAM Act in the Senate is a direct testament to the undeniable power of immigrant youth and our allies who have pushed for meaningful legislation that protects our communities without harmful tradeoffs intended to increase enforcement and criminalization of immigrants,” United We Dream Executive Director Greisa Martinez Rosas said in a statement received by Daily Kos. “Protection for some immigrants should never come at the cost of detention and deportation of others. A clean DREAM Act would deliver just that to nearly two million undocumented people across the country.”

“We support any and all opportunities to provide a pathway to citizenship for undocumented people that do not grow the deportation force of ICE and CBP, especially as far too many immigrants remain at risk of detention, deportation and death,” she continued.

Like Durbin said, this is the year, this is the time. Let’s permanently protect Ana and 11 million undocumented immigrants so that they no longer have to live their lives at the whim of a court decision or president. “To Ana, we need you,” Durbin continued. “We want you. We want to make you part of the future of this country because you’re such an important part of America today. This Dream Act means a lot to me. We need to make it the law.”