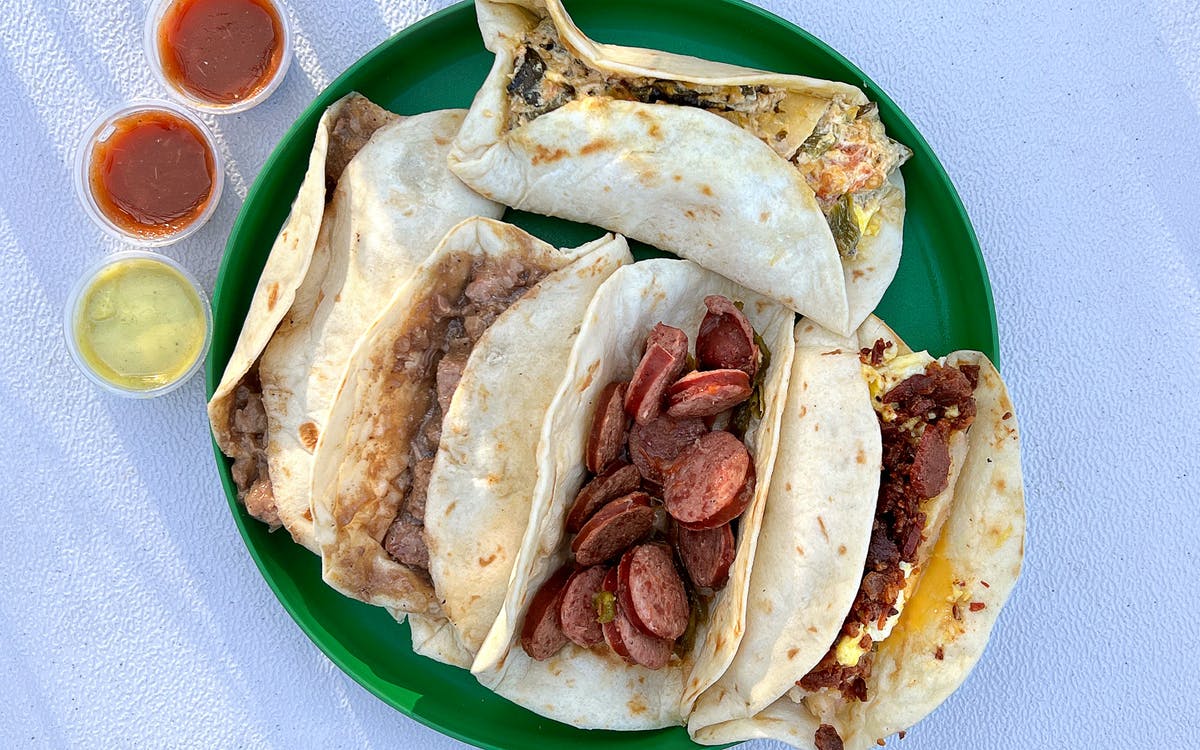 Marcelino’s is impossible to miss. On one pink wall of the East Austin taqueria is a mural of legendary Mexican comic Chespirito’s character El Chavo, his likeness obscured by a medical mask. The image is both humorous and sobering. Its Spanish text admonishes “don’t be dolts, wear a mask.” Yet, even as cities have eliminated pandemic restrictions and lowered alert levels, there is little chance the mural will be painted over anytime soon. Owner Raquel Vargas isn’t ready to let go. “It’s a reminder of those we lost during COVID,” she says.

Doña Delfina was one of the many taken as a result of COVID. Delfina, a Marcelino’s customer, was “the grandma of the barrio” who always had pearls of wisdom to dole out to adults and tykes alike, Vargas explains. Folks like Delfina have made Marcelino’s an East Austin institution. But they’re just one part of what makes the taqueria great.

Luis Gamez, Vargas’s genial nephew and the taqueria’s general manager, answers customers’ questions with a smile and expedites orders. He punctuates sentences with terms of endearment such as “buddy,” “boss,” or “amigo” as he confirms an order or expresses thanks for visiting his family’s taco joint. Orders are announced via the numbers on the receipt stub, and everything is wrapped in foil and bagged to go. While there isn’t seating, customers usually eat on the trunk of their cars or take the tacos elsewhere. I’ve done both, and my experience has always been overwhelmingly positive.

Each bite of the carne guisada taco—a family recipe of the beef stew—is rich and spicy. The flour tortilla from Austin-based, family-owned Fiesta Tortillas holds up nicely thanks to its slight sponginess. The signature taco is so revered that when Marcelino’s opened, children would show their report cards to founder Maria Vargas, Raquel’s mother, and plead for the carne guisada. “If you raise that C to a B, I’ll let you have whatever you want,” she told them. They always wanted the carne guisada. It’s a stunner of a taco and sells out quickly, as does another favorite, the Elgin sausage taco.

On my first visit, I ordered the last two Elgin sausage tacos at 8 a.m. They were hefty, with a blend of softly scrambled eggs, pico de gallo, and thinly sliced sausage. There was still a hint of the casing’s snap. A drizzle of fiery salsa verde transformed the taco into a vehicle of delight. It’s just as good without eggs. That being said, the taco’s name is misleading. While the Vargas family used to source its smoked pork sausage from the legendary Meyer’s Elgin Sausage in Central Texas, it changed suppliers. When asked why, Gamez, in a matter-of-fact tone, says he can’t recall. The sausage is now provided by Slovacek’s in West, two hours north of Austin. “So many people know it as the Elgin sausage taco, though, we couldn’t change the name,” Gamez says. Whatever the moniker, the sausage taco is a must-order—just make sure to get to Marcelino’s early enough.

The bacon and egg taco is a wonderfully filling study in texture. Vargas waits until the bacon grease is sizzling hot to add the chopped bacon. It gives the pork a quality similar to the crunchy edges of carnitas. The finished filling is a combination of firm—but not dry—scrambled eggs and crackly bacon. Other hits include the barbacoa, which is just greasy enough to give the beef juiciness without ruining the palate; and the migas, a crunchy, cheesy package best ordered in a nixtamalized corn tortilla.

Marcelino’s didn’t start out as a taqueria, though. Maria opened the shop in 1987 as a convenience store selling pressed ham and cheese sandwiches, chips, and soda to the employees at a nearby bakery as well as city workers, who clamored for other options, including nachos and Frito pies. Maria ignored the specific requests. Instead, after about three years, she began to sell prewrapped carne guisada tacos. Shortly thereafter, the Vargas family began selling other prewrapped breakfast tacos, including potato and egg and bacon and egg. There wasn’t much in the way of a kitchen back then. “We had one of those electric skillets that you can find in Walmart and we had a Crock-Pot,” Raquel says. It wasn’t enough.

As the taqueria grew in popularity, the family accommodated. Seating in the small dining room was reduced by half for a prep station, the staff tripled from three to ten family members, and more ingredients needed to be ordered. “We went from one little five-pound bag of potatoes to about one hundred pounds of potatoes a day,” Raquel, who took over in 2017, says. Eventually, the lack of cooking space forced the family to close the dining room.

Still, the Vargases have watched as customers’ children have grown up, gone off to college, and gone on with their lives. But whenever those kids visit their parents these days, they make sure to stop at Marcelino’s. Now the grandchildren of customers are carried to the taco window. So dear is Marcelino’s that, as hokey as it seems, some regulars who come back after an extended time away are brought to tears as they order their carne guisada and Elgin sausage tacos.

Gamez is looking to add seating in the near future. He and other family members are renovating his grandmother’s former house at the rear of the property. “We convinced my grandma to let us,” he says. With the matriarch’s approval, Gamez and family are fixing up the house to welcome customers inside and on the patio to make Marcelino’s Tacos feel more like home, to make patrons feel like they once did. As Vargas and Gamez are keen to reinforce, in its early days, Marcelino’s was a gathering place. It’s where you took your family after church (there’s a Catholic parish across the street). It’s where you’d stop for grab-and-go tacos en route to work and where neighborhood kids went out of their way for breakfast tacos on the walk to school. “We’d like to bring that back,” Gamez says. When the work is completed this summer, I reckon they will have succeeded.