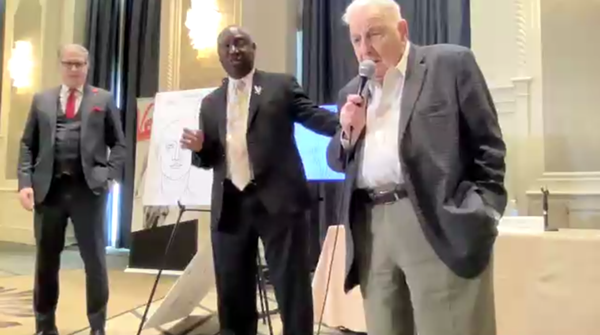 From left: Attorneys Ven Johnson and Ben Crump alongside forensic pathologist Dr. Werner Spitz at a press conference in Detroit discuss the results of an independent autopsy into Patrick Lyoya, a 26-year-old man killed by a Grand Rapids police officer.

A world-renowned forensic pathologist was tapped to conduct an independent autopsy of Patrick Lyoya, the 26-year-old Black man who was fatally shot in the back of the head by a Grand Rapids police officer after a traffic stop earlier this month.

The autopsy was performed by Dr. Werner Spitz, a 95-year-old self-described “medical detective” from Michigan who has played a role in many famous investigations over the years, including those of John F. Kennedy, Martin Luther King Jr., Casey Anthony, and JonBenet Ramsey, among others.

Spitz revealed the results of the autopsy at a press conference at Detroit’s Westin Book Cadillac hotel on Tuesday alongside attorneys Ben Crump and Ven Johnson, who are representing Lyoya’s family.

At one point, Spitz held an actual human skull during the press conference, which he had drilled a hole through to show how Lyoya was killed. He said his forensic recreation of the trajectory of the bullet showed it went through the back of Lyoya’s skull and came through the front, but got lodged under his skin above his right eye.

Spitz said he observed no other injuries on Loyoya’s body.

He added, “There is no question what killed this young man.”

Crump said the investigation was significant because Grand Rapids Police would not initially say whether Lyoya was shot in the back of his head.

“We can confirm that he was shot in the back of his head,” he said.

Spitz conducted the autopsy at the Grand Rapids funeral home where Lyoya’s body was stored. A toxicology test was not conducted because by the time Spitz got access to Lyoya’s body, it was too late.

Johnson said it was typical for independent autopsies to be conducted at funeral homes. Spitz conducted the autopsy on Saturday, and said it took about two hours to complete. Lyoya’s funeral is scheduled for Friday.

Lyoya and his family had relocated to Grand Rapids in 2014, part of a growing number of refugees fleeing violence in the Democratic Republic of Congo. He was pulled over by a Grand Rapids police officer at 8:11 a.m. on April 4 over an unregistered license plate.

The officer, who has not yet been named, was shown on video telling Lyoya to get back in his car. When Lyoya did not comply, the officer tried to grab him, and when Lyoya tried to flee the officer tackled him and tried to deploy a stun gun. A struggle ensued.

At some point during the tussle, the officer’s bodycam was turned off. The Grand Rapids Police Department said the device’s off button was triggered, just before the cop pulled the trigger.

The police department has not yet released the bodycam footage. However, a bystander caught a video of the officer shooting Lyoya in the back of the head while pinned face-down on the ground.

Johnson said they are asking for the police department to release the bodycam footage as part of a civil lawsuit. He expressed skepticism that the bodycam could accidentally be turned off during the fight, saying the button needs to be held down for three full seconds in order to do so.

Johnson said he believes the combination of the autopsy and video footage released so far shows that Lyoya neither fought nor threatened the officer.

“You never see a knife, no baseball bat, no gun, no nothing,” he said, calling the officer’s actions “an unnecessary use of deadly force.”

Crump added that video released starts with the officer doing a U-turn, suggesting the officer was driving in the opposite direction of Lyoya, and turned around to get behind Lyoya’s car to inspect his registration on his rear license plate.

“How did the officer know that Patrick’s tag registration wasn’t valid, when he’s coming from the opposite direction?” he said, adding, “We concluded that we have to investigate thoroughly whether this is a ‘D.W.B.’ case, what we in the African American community know as a ‘Driving While Black’ profiling case.”

Lyoya’s family is asking for the police officer to be fired.

“I call it an execution because I believe that it was so unnecessary,” Crump said.