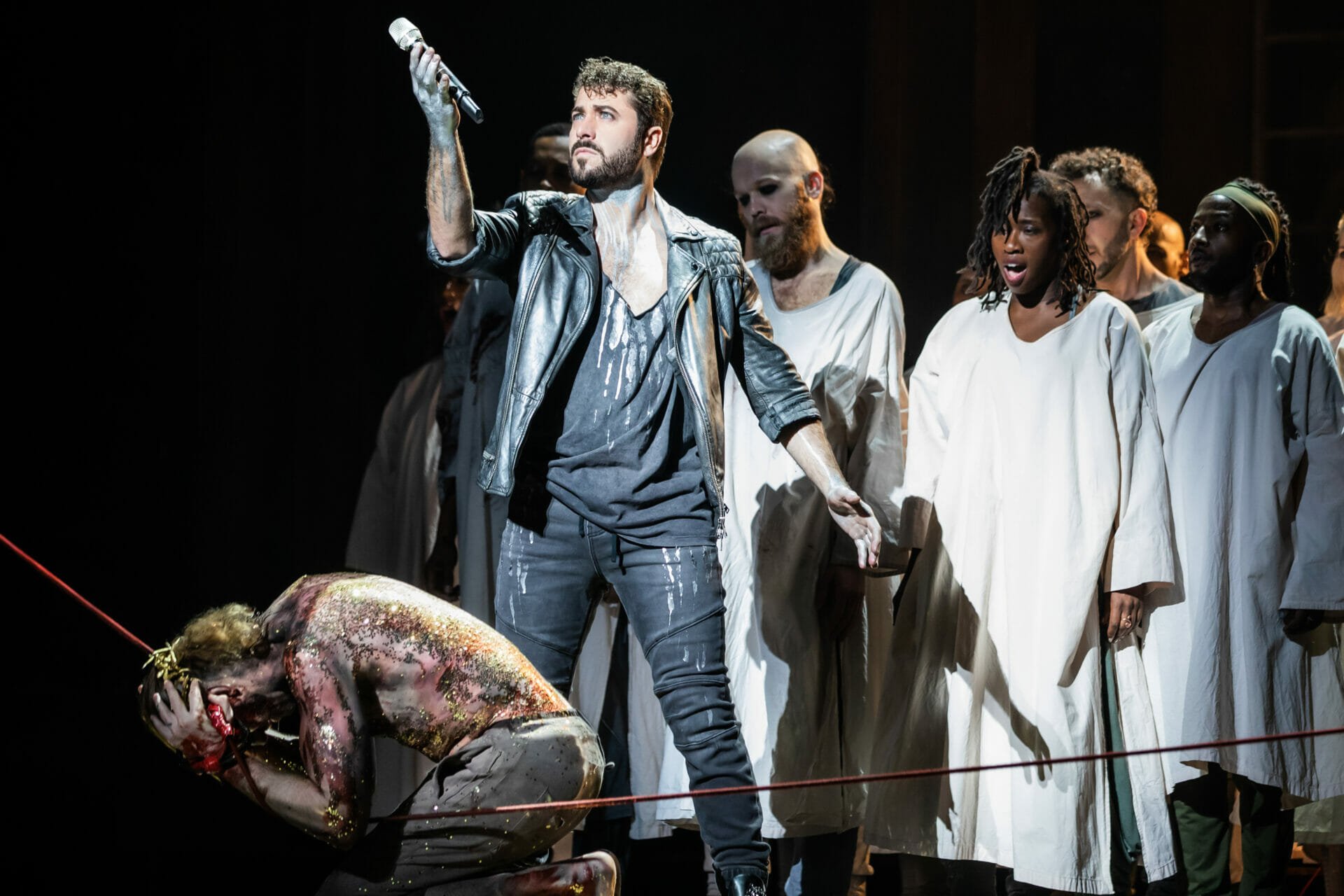 When Omar Lopez-Cepero takes the stage as the villain next week in Jesus Christ Superstar at the Fox Theatre, he will be stepping onto the historic Atlanta showplace’s stage for the first time. And it’s been a long time coming.

The actor says he has attended many shows at the Fox, having grown up around Atlanta and graduated from Duluth High School. Now he returns home within his first few months on this North American tour to perform one of musical theater’s most impressive roles, Judas Iscariot. The show runs April 19-24.

Lopez-Cepero took a break from his vocal rest regimen to talk with ArtsATL about the roots and trajectory of his career.

ArtsATL: This is the 50th anniversary tour of Jesus Christ Superstar. But this Olivier Award-winning revival, which launched in London in 2016, is somewhat different from previous productions, right?

Lopez-Cepero: I think that [this version] has something for everyone. Theatrical audiences, they’re gonna really love this show. It’s an iconic piece, and obviously you can’t go wrong with Andrew Lloyd Webber. But for folks that are new to theater, it’s a great segue because it really has a rock concert element and we have the band on stage. And it really kicks!

ArtsATL: How has the tour been going for you so far?

Lopez-Cepero: It’s an incredible honor to join this tour! This show is 50 years old. And so to see how it’s been interpreted for so many years in different ways through different lenses, and to be part of that legacy now is really an honor for me. And my good friend actually plays Jesus! Aaron [LaVigne] and I have been friends for, like, 12 years, and he was a groomsman in my wedding.

ArtsATL: So, how does that real-life friendship translate onto stage?

Lopez-Cepero: Well, interestingly, I wouldn’t say that we’re the same as the characters, but there are certain similarities within the characters that I think we can both latch onto. In Aaron’s case for Jesus, he’s carefree, positive, lives life like everything’s gonna work out, everything’s gonna be great. Whereas I’m always like, “OK, well, what’s the plan? What’s happening next?” So from the Omar/Aaron perspective, it leans into the Judas/Jesus characters, because Judas is like, “Hey man, things are getting out of control,” and Jesus is saying, “Nah, man, everything is good. Don’t worry. Take it one day at a time.”

And also, there’s just natural chemistry there ’cause we’ve known each other for so long. So, you know, a simple look or eye roll or something has more meaning to it because I’ve seen it before.

And there are a lot of intricacies and nuances within this story. I think what was brilliant from Andrew Lloyd Webber and Tim Rice was to tell the story from the antagonist’s perspective, but they let him be the protagonist of the story. So that has been really rewarding and really fun. I’m grateful that I’ve developed some good technique through studying and through my work throughout the years to be able to navigate that.

ArtsATL: Speaking of your training, you started out here in Atlanta, right?

Lopez-Cepero: Yeah, it’s a pretty cool story, actually. I was an athlete growing up. I played soccer — I played a lot of different sports — and my parents loved music and the arts, but they weren’t fully versed in it. I was drawn to music. And then in middle school – I’ll never forget – the orchestra teacher had brought in an Atlanta Symphony Orchestra member who played the cello and played “The Flight of the Bumblebee.” And I literally was staring at this cello, thinking, “Oh my God, that’s amazing!” So I played the cello for two years, sixth and seventh grade.

ArtsATL: How did you wind up in theater?

Lopez-Cepero: I had fallen in love with music, and I recognized that I could sing. So I joined the chorus, and it wasn’t until my freshman year at Duluth High School where I think the universe stepped in. I auditioned for a class that was called Music Theatre Workshop, but it turned out that that class was for upperclassmen. And so the teacher thought that I was a transfer student when I auditioned. Well, I’m not sure how she thought that because I was 4-feet-11-inches as a freshman and I looked like I was 11 years old [laughs]! But the lucky strike was that they were doing a production of Mame, which has a role called Little Patrick who’s 11 years old. And guess who played Little Patrick and made his musical debut?

ArtsATL: Did you also see theater around Atlanta?

Lopez-Cepero: I definitely went to go see shows at the Fox, which I think is really cool for me to get to play that stage. It’s so crazy!

I’ll never forget sitting in the audience and seeing the twinkling stars. It’s like, what are we, in Arabian Nights? This is crazy! So I know it’s gonna be a weird “pinch me” thing [when I perform there]. I’ll probably tear up during the soundcheck, because it’ll feel very full circle to me. You know, I’ve been able to play so many big venues and theaters around the country, but I’ve never gotten to play my major home theater. I’ve been at this for a good little minute and to have this opportunity at this point in my career to come back in a role like this, it’s special.

ArtsATL: Where else did you attend theater growing up?

Lopez-Cepero:  I also saw shows at the Aurora Theatre and Atlanta Lyric Theatre, the Georgia Ensemble Theatre. I was grateful that my parents introduced a lot of that to me as a viewer.

And I have to give a shout-out to my high school teachers, Rebecca Houser, who was my theater teacher and is going to come see Jesus Christ Superstar, and, sadly, my late, departed chorus teacher Lee Rodriguez Ayres. They both were so instrumental in finding this as my vocation because had it not been for them, I probably would’ve either been a doctor or lawyer or who knows what. [In his senior year, his teachers encouraged him to pursue a music scholarship, and he ended up scoring a full one to study voice at the University of Miami.] I really owe them so much for the experiences that I’ve had in my life and career.

ArtsATL: How nice! After this tour, at some point you have the musical version of The Notebook coming up, where you’ll be playing Lon.

Lopez-Cepero: Yes, I’m really excited about that! We were supposed to do that, like a year and a half ago when the pandemic hit. So we’ve rescheduled the production like twice, three times. So it’s hopefully still happening, knock on wood, in the fall. And it’s premiering at the Chicago Shakespeare Theater with a hopeful Broadway turn later in 2023.

It’s a beautiful, beautiful show. I mean, obviously the book is amazing and the movie, you know, is iconic. But it’s something that really, because it’s such an emotionally heartfelt show, lends itself to be musicalized. Ingrid Michaelson wrote the music and lyrics, and if you know her music, she’s a singer-songwriter who really leads with lyric, and her melodies are powerful.

ArtsATL: As an actor, has it been hard to navigate through the pandemic?

Lopez-Cepero: It really made me think about a lot of things because as the career kind of dissolved into nothing, and a lot of things had been happening for both my wife [stage and screen actress Arianna Rosario] and me pre-pandemic, we said, “What’s it gonna look like when things do come back, if they come back, and is this the life that we still wanna lead?” And when we really sat down, we said, “This is the only thing that we can see ourselves doing.” I mean, yes, we can maybe direct or produce and do things down the line, but I’ll forever be an artist. And I think that art found me because it was my calling, and I’m grateful for it.

ArtsATL: Well, thanks so much for taking time out of your day and out of your vocal rest to talk to ArtsATL.

Lopez-Cepero: This is good. It’s part of my warmup [laughs].

Sally Henry Fuller is a theater nerd and performing arts journalist with a passion for telling people’s stories. When she’s not interviewing artists, you can find her in a local coffee shop or watching a musical with her bearded husband.