The Uncertain Recovery of Manhattan’s Chinatown 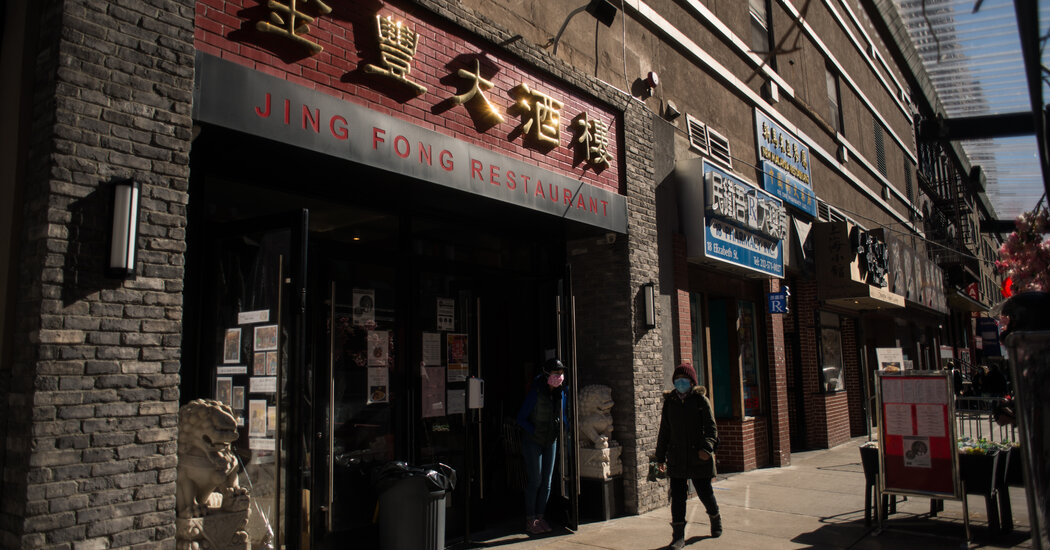 Weather: A nice, warm day reaching about 70, and mostly sunny by the afternoon.

Jenny Wu, 28, planned to have her wedding banquet next year at Jing Fong, the largest restaurant in Chinatown.

For many, the dim sum palace was the prime spot to hold weddings, birthdays, graduations and reunions. But that is no longer possible: After 28 years in operation, the banquet hall closed down this past Sunday.

The restaurant will continue to offer takeout and some outdoor dining. But Jing Fong’s banquet hall was geographically and symbolically at the heart of Chinatown, and the shutdown underscored the uncertain recovery of one of New York’s most famous immigrant neighborhoods.

[The Jing Fong closing leaves a “crater” in Chinatown.]

Gripped by the pandemic, Jing Fong experienced an 85 percent plunge in revenue, making it virtually impossible to operate, Truman Lam, whose family owns the restaurant, told my colleague Winnie Hu.

“We just can’t make ends meet, and who knows when this business is going to rebound?” he said. “Half of our business was attributed to banquets, parties and weddings, and that’s been a big fat zero.”

Jing Fong was one of few unionized restaurants in the city. The closing is particularly painful for the more than 100 workers who lost their jobs.

Jonathan Chu, whose family is Jing Fong’s landlord, said they did everything they could to help the restaurant, including not collecting rent payments during the pandemic.

In many ways, Chinatown has suffered longer than most parts of the city. Months before the first case was confirmed in New York, reports of a virus outbreak in China curbed foot traffic in the neighborhood.

At least 17 restaurants and 139 ground-floor stores in Chinatown have permanently closed during the pandemic, according to Wellington Z. Chen, the executive director of the Chinatown Business Improvement District/Partnership.

A year after the coronavirus arrived, some visitors and tourists are still keeping their distance because of a rise in hate crimes against Asian-Americans in the city and across the country.

When Jing Fong might reopen a banquet hall in Chinatown remains unclear. (The owners have a second restaurant on the Upper West Side.)

The last day the banquet hall was open, a line of customers stretched down the street. Fans wrote on postcards why the restaurant mattered to them: “Please save our favorite restaurant.” “It was my best birthday.” “It is important to my family identity.”

And finally: Photographing a New York in need

Last year, as the coronavirus began spreading in New York, I worked closely with Renee Melides, a photo editor on The Times’s Business desk, on a photo essay that visualized the city as it became a global center of the pandemic. When that piece was just a concept and life still seemed somewhat normal, the two of us sat over a coffee.

Yes,” Renee said, interrupting me. “Do it. Now.” And I walked outside and started photographing.

For a while, the pictures were mostly empty streets, ambulances and those frightening freezer-truck morgues. Then the spring surge abated and people started emerging, and the vulnerabilities of our city, exposed by the virus, became more apparent than ever.

I could see that inequality had become more pronounced, observing the rich and the needy forced to share the same sidewalks. I watched as stores closed down on street corners one by one until nothing but “For Rent” signs remained, and I found myself stunned as I moved through parts of the city that were once thronged by tourists but were now empty.

As vaccines were developed and a potential end to the health disaster seemed within grasp, I felt it was critical to focus attention on another element of this crisis: the deep recession we’ve found ourselves in.

I needed to photograph our decimated economy in a way that brought the various elements to life — through the people living it. The resulting photo essay is my requiem to the New York that we knew before the pandemic, but also a love letter to the resilient people who never gave up.

I was waiting for the elevator when I encountered my neighbor on her way to the trash room. Despite living two doors away from each other for four and a half years, we had only spoken once before.

“Absolutely,” she said. “I have four little ones. Anyone who feeds my kids is a friend of mine!”

A few weeks later, I knocked on her door and presented her with a glazed poppy seed almond cake.

“It’s warm!” she said as she cradled the foil-wrapped loaf delicately with both hands.

The next day, I heard a knock on my door. It was my neighbor.

“Thank you so much for the cake,” she said. “It was delicious! I’m so sorry but I don’t know how to bake. I’m terrible at that stuff, but we just picked up dinner from Shake Shack.”

She handed me a burger.

We have shared many takeout meals and homemade desserts since then.

New York Today is published weekdays around 6 a.m. Sign up here to get it by email. You can also find it at nytoday.com.

What would you like to see more (or less) of? Email us: nytoday@nytimes.com.