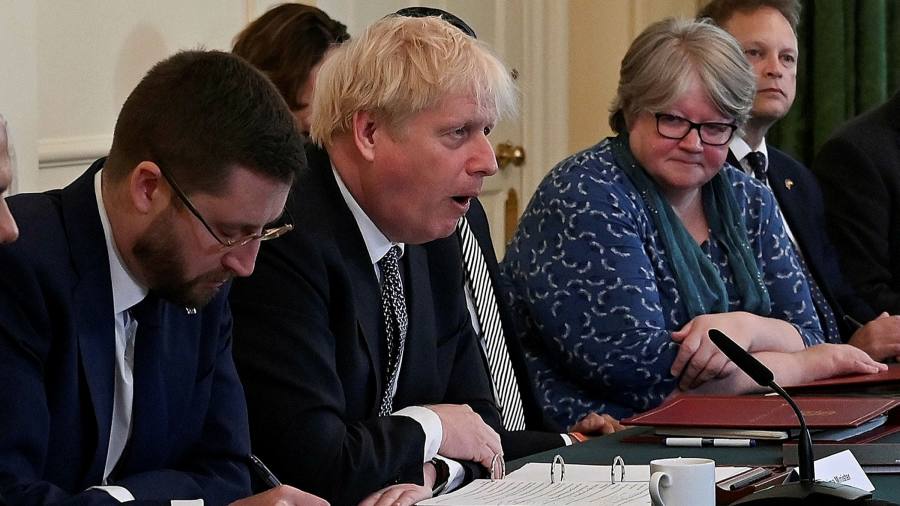 Boris Johnson allowed the cameras into the cabinet room on Tuesday; he may have wished they had stayed outside, as the lens swept around a cast of grim-faced ministers, digesting the self-inflicted fiasco threatening to overwhelm the prime minister.

Johnson’s relationship with the truth was once again dominating the news, after it transpired the prime minister had been personally briefed about past allegations of sexual misconduct by the now disgraced former Conservative deputy chief whip Chris Pincher.

Within hours, Sajid Javid, health secretary, quit the cabinet, followed shortly afterwards by Rishi Sunak, chancellor, unable to serve any longer under a man whose values and judgment they no longer respected.

Number 10 had spent the last few days denying Johnson was aware of “specific allegations” about Pincher. So had a number of ministers, sent into hostile broadcast media interviews, armed by Johnson with incomplete or inaccurate versions of the truth.

“A picture paints a thousand words,” said one senior Tory official, studying the morose scene around the cabinet table. Thérèse Coffey, the work and pensions secretary who had been given the unenviable task of defending Johnson on Sunday, glared at the prime minister.

Dominic Raab, deputy prime minister, endured a torrid “media round” on Tuesday, insisting that Johnson had not been briefed about the Pincher allegations, only to discover shortly afterwards that this was not the case.

It is time for cabinet colleagues to recognise the appalling damage that the prime minister is doing to the party, government and country

Johnson was later engaged in crisis talks with aides as rumours swirled of resignations from the government. “It’s a fin de siècle moment,” said one former minister. “It’s the combination of incompetence and dishonesty that people can’t stomach.”

Johnson, like many other embattled prime ministers before him, went to the House of Commons tea room to glad-hand his depressed MPs, hoping to rally support. But during the day, support was ebbing away; MPs reported new letters were being drafted to send to Conservative grandees, expressing no confidence in Johnson.

Pincher resigned as deputy chief whip last Thursday after admitting to “embarrassing” himself and others by getting drunk at a private members’ club in London; he was accused of groping two men. He was later suspended from the Conservative party.

It fell to Michael Ellis, Cabinet Office minister, to explain to MPs why Downing Street had repeatedly and incorrectly insisted the prime minister had received no “specific allegations” relating to Pincher before he made him deputy chief whip in February.

Ellis said Johnson “did not immediately recall” being told in 2019 that the Cabinet Office had investigated and upheld a complaint about inappropriate behaviour by Pincher, who was a Foreign Office minister at the time. Once he remembered, the prime minister told the Downing Street press office.

Johnson’s failure to recall the facts once again placed his official spokesman, a civil servant funded by the taxpayer to provide accurate information, in an invidious position.

At the start of Tuesday’s regular briefing of Westminster journalists, the first question to Johnson’s spokesman was: “Will you be telling the truth?” The spokesman said he would always seek “to provide the information available to me at the time of each meeting”.

Johnson’s familiarity with the truth is already the subject of an investigation by the Commons privileges committee, which is looking at whether the prime minister deliberately misled MPs over the partygate scandal.

He has been sacked twice for lying in his career: on the first occasion he was dismissed as a journalist by The Times for fabricating a quote. On the second he was removed from the Conservative front bench team for lying over an extramarital affair.

Tory minister Lord Nicholas True read out a statement in the upper house on Tuesday defending the government’s commitment to high standards in public life, in which he seemed barely able to believe what he was saying. Baroness Natalie Evans, Conservative leader in the House of Lords, joined in the laughter.

But for cabinet ministers, Johnson’s conduct is no laughing matter. William Wragg, Tory chair of the Commons public administration committee and a Johnson critic, urged them to “consider their positions”. “It’s not a question of systems but of political judgment,” he said. “That political judgment can’t be delegated.”

Caroline Johnson, a Tory MP not known for attacking Johnson, asked in the Commons why the police had not investigated the Pincher allegations in 2019, why he had not been sacked at the time and why Johnson then gave him another job as deputy chief whip.

Johnson’s admission that he knew about the Pincher allegations followed an intervention by Lord Simon McDonald, the former top civil servant in the Foreign Office, who accused Downing Street of concealing the truth.

Even among the prime minister’s supporters, McDonald’s blistering letter has prompted fears about whether he can survive. One Tory MP said: “Even among the PM’s most uber-loyalists, there is now a sense that he has go, and has to go now before he inflicts any more damage on the party.”

Some MPs predicted next week’s elections to the executive of the 1922 committee of backbench Tories would result in a “clean sweep” for candidates who want to remove the prime minister through a no-confidence vote. That would require a change to party rules. “I can’t see there being a ‘Boris loyalists slate’,” said one former cabinet minister. “Who’d be on that?”

Tory MP Anthony Mangnall, another Johnson critic, said ministers should pull the plug on Johnson now. “It is time for cabinet colleagues to recognise the appalling damage that the prime minister is doing to the party, government and country,” he said.

The faces of those ministers seated around the cabinet table suggested some were already grappling with that dilemma. By the close of Tuesday, Johnson’s cabinet was disintegrating and with it, perhaps, his grip on power.