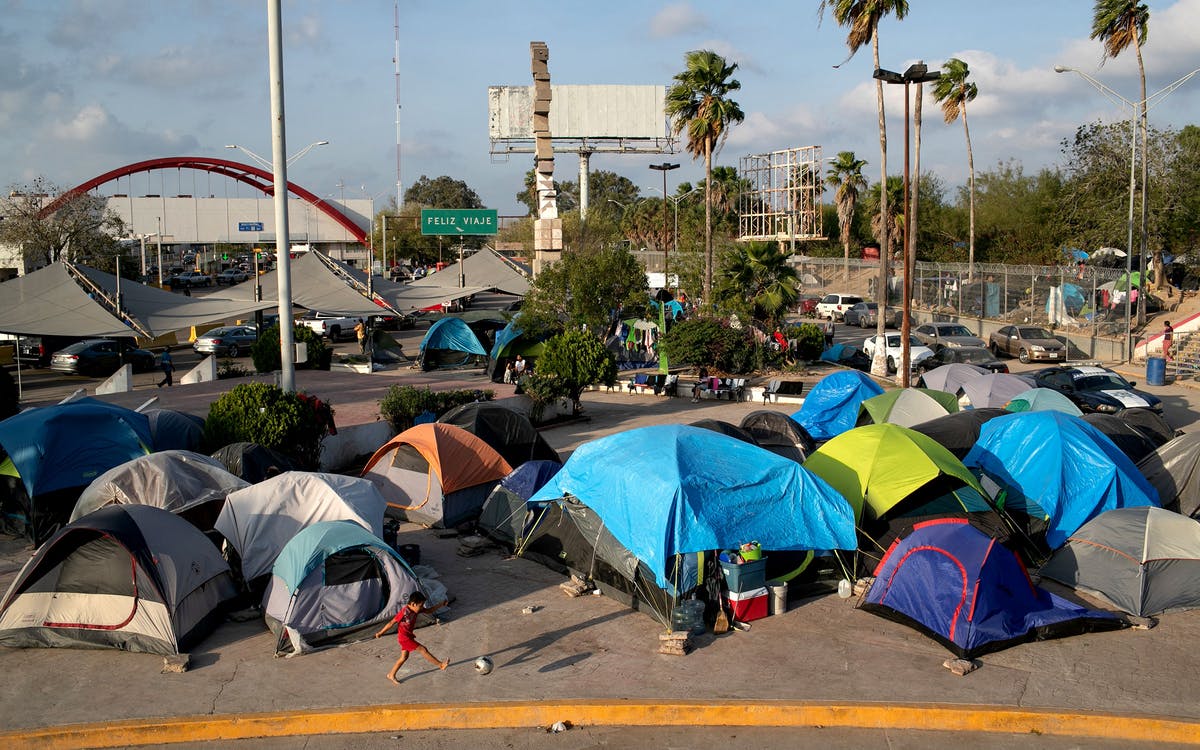 In a week of blockbuster, world-altering Supreme Court decisions, the result of Biden v. Texas might have garnered less attention if it weren’t for the scenes of horror we saw in San Antonio on Monday, when authorities discovered a semitruck full of dozens of dead migrants, including children.

Biden v. Texas took up the issue of immigration policy, specifically the Migrant Protection Protocols, better known as the Remain in Mexico plan. In 2019, President Donald Trump created the program, which essentially turned northern Mexico into an immigration detention center where the U.S. dumped asylum-seekers as they awaited their court proceedings. When Biden tried to end the program in the early days of his presidency, Texas sued to stop him, arguing that rolling it back would lead to a huge release of migrants into the U.S. A court injunction had forced the Biden administration to continue pushing asylum-seekers back into Mexico—until today, when the Supreme Court sided with the president and allowed him to end the program.

The Supreme Court’s decision will have a substantial effect on how much discretion Biden and future presidents will have to manage immigration. But the ruling will do little to prevent migrant deaths like the mass tragedy in San Antonio. The incentives and pressures that push the most desperate to attempt dangerous crossings remain in place, even though the threat of being detained in northern Mexico will no longer be among those pressures.

As a program, the MPP was unprecedented. U.S. and international law both recognize a legal right to request asylum, and before Remain in Mexico, those who arrived in the U.S. seeking refuge were permitted to stay here while they worked to prove their asylum claims in court. Some of these asylum-seekers were held in detention centers, but many others were allowed to live with sponsors on parole. That made sense for multiple reasons: First, asylum-seekers have not broken any laws; crossing the border to ask for refuge is not illegal. Second, no administration has ever had the resources to detain every person who’s apprehended crossing the border.

But the Trump administration, which was committed to detaining as many migrants as possible, created the MPP to force asylum-seekers back into Mexico to wait for their court proceedings. For one of the first times in history, squalid refugee camps sprang up south of the U.S.-Mexico border.

Northern Mexico is one of the most dangerous regions in the world. When I visited asylum-seekers in Tijuana in 2019, that city was the murder capital of the hemisphere. While some might have been able to find jobs or safe places to live, most were clear in what they told me: they would try to cross again, and next time not surrender themselves to seek asylum but instead try to pass into the U.S. undetected and undocumented. The gangs that many people flee from in Central America have claws that reach all the way into northern Mexico. To escape the grasp of these criminal networks, many felt they had no choice but to cross al otro lado (“to the other side”).

It is possible that some of 53 migrants who died from heatstroke and dehydration this week found themselves in this sort of situation, in which a blend of complex incentives pushed them to contract smugglers and try to move undetected across the border and through other Border Patrol checkpoints. One might hope that, with the end of the MPP, these incentives would go away. Unfortunately, they remain in place.

We can’t know if everyone in the truck was worried about, or even knew about, the possibility of being placed in the MPP. At least 22 of the dead were Mexicans, who could not be put in the program anyway because of laws preventing the return of asylum-seekers to their home country. While it’s important to avoid speculating on how each individual in the truck made their decision to cross, we do know that one further-reaching government policy has incentivized tens of thousands to risk this sort of dangerous and risky crossing. That policy wasn’t Remain in Mexico; it’s Title 42.

Title 42 is another Trump-era program, from the early days of the pandemic, that essentially ended the right to asylum. While asylum-seekers had once been granted their legal right to argue their cases in court, under Title 42 authorities could summarily “expel” them to their country or push border crossers back into Mexico. This created a complicated situation when combined with the MPP. Under Title 42, the U.S. doesn’t have to bother making people wait in Mexico to argue their asylum claims; instead, it can simply deny their claims without trial and expel them. In some ways, the people who were still placed in the MPP became the lucky few who were accepted into the asylum system instead of simply being sent back to the countries they’d fled.

When Biden took office, he made the confusing decision to end the MPP but keep Title 42 in place. Asylum-seekers would no longer have to wait in Mexico, but they also no longer had a right to seek asylum in the first place. To make an analogy, it was as if a hotel told potential guests, “You no longer have to line up outside in the cold as you wait for a room! But we have no rooms available.”

Biden’s decision to keep the policy in place horrified many immigrant advocates, but it garnered little widespread attention until Ukrainian asylum-seekers began arriving on the border after Russia invaded their country. As the administration confronted the unnerving prospect of a Ukrainian potentially facing a Title 42 expulsion back to a war zone, Biden announced that he would finally rescind Title 42. That never happened, though: In May a group of twenty Republican-led states, including Texas, sued the administration to stop the rollback. A quick injunction from a conservative federal judge in Louisiana forced Biden to continue expelling migrants under the statute.

As an incentive to cross in discreet and dangerous ways—and to keep crossing during the hottest months of the year—Title 42 exerts a much more powerful pressure than Remain in Mexico ever did. For one thing, Title 42 has affected countless more people than the MPP: While the Trump administration put 68,000 asylum seekers in the MPP, more than 1.6 million migrants have been expelled under Title 42 from March of 2020 to this day (1.1 million of those expulsions have come under Biden). Tens of thousands who’ve been expelled under Title 42 have tried crossing again, some as many as five or six times. Although this practice, which Border Patrol calls “recidivism,” has always happened, recidivism rates have skyrocketed under Title 42. Because people don’t have long waits for deportation trials, the same person can try crossing multiple times in a matter of days. And because the most vulnerable are no longer granted asylum, the number of folks eager to cross by whatever means necessary has gone up.

This has created a crisis on the border—a real one now, not one manufactured for political reasons. The number of attempted border crossings keeps hitting historical highs, even though the number of individual migrants arriving at the border has gone up by a smaller number.

How will the Biden v. Texas decision affect this situation? Since being forced to reinstate the MPP, the administration has enrolled only a small number of asylum seekers in the program—just a few thousand at a time. Those currently in the program will likely be paroled into the U.S. to wait for their court proceedings, so there will be that many fewer people in northern Mexico contemplating crossing between ports.

The decision also has broader, more abstract consequences. If the Supreme Court had ruled against Biden on the grounds that the administration must detain all asylum-seekers, it would have dramatically constrained any president’s discretion to deal with migration. But in the short term, the end of the Remain in Mexico plan will have little effect on migration. Under Biden, the program was small and affected a relatively small number of people. And with Title 42 still in place, those most desperate for refuge will continue to attempt dangerous crossings—across rivers, through deserts, and in the back of trucks.