The strains on democracy are showing 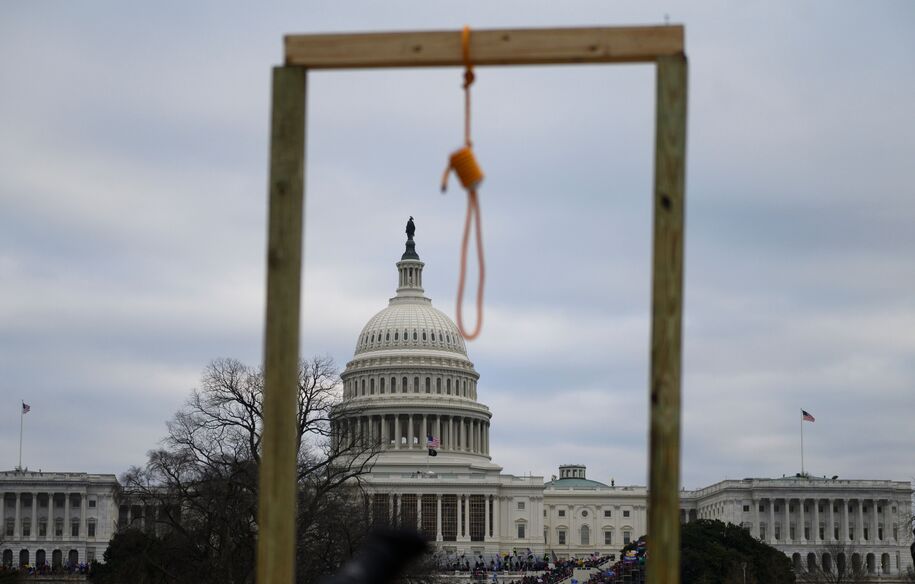 On the NY Times bombshell story:

The Justice Department seized records from Apple for metadata of House Intelligence Committee members, their aides and family members.

Prosecutors, under the beleaguered attorney general, Jeff Sessions, were hunting for the sources behind news media reports about contacts between Trump associates and Russia. Ultimately, the data and other evidence did not tie the committee to the leaks, and investigators debated whether they had hit a dead end and some even discussed closing the inquiry.

But William P. Barr revived languishing leak investigations after he became attorney general a year later. He moved a trusted prosecutor from New Jersey with little relevant experience to the main Justice Department to work on the Schiff-related case and about a half-dozen others, according to three people with knowledge of his work who did not want to be identified discussing federal investigations.

Pelosi: “The news about the politicization of the Trump Administration Justice Department is harrowing. These actions appear to be yet another egregious assault on our democracy waged by the former president.”

And this is where the belief in biblical inerrancy intersects with Lindell’s devotion to the Big Lie. Just as someone can never question the Bible’s inerrancy, one can never question the unassailable truth of Trumpism. To do so would be no less than to question the will of the deity who, for many conservative evangelicals like Lindell, directly chose Trump to lead and save the nation. In other words, the political landscape of Trumpist America was as binding as the Bible… both inerrant, both beyond question, both designed by God to favor the faithful.

From this frame of reference, Trump’s decisive loss to Biden in the 2020 election was theologically intolerable. It not only challenged the inerrant reading of the political landscape, it challenged the holiness of the power structure resulting from it. Lindell has credited his own financial success to his religious beliefs. With Trump’s tenure in office built on the brand of the “wealthy businessman” and the approval of the evangelical elite, wealthy Christian conservatives like Lindell were positioned as saintly figures who embodied a nationalist American holiness emanating from the Oval Office. An end to Trump’s political hegemony was also an end to access to that type of holiness—something that anthropologists of religion see in other cultures where shifting political tides threaten the holiness of saintly groups and demand desperate reactions.

“if the most powerful human being on the planet … is not held accountable, can do whatever they want to do, what does that say about our democracy as a whole?”

A new battle is being waged over how we teach our country’s past. But old feuds remind us that history is continually revised, driven by new evidence and present-day imperatives.

Some of these battles never quite end. (The endurance of the Lost Cause ideology, which argues that the South fought not for slavery but for sovereignty, is one example.) But the broader problem is that, in the realm of public history, no settled law governs. Should the discipline forge effective citizens? Should it be a source of patriotism? Should it thrive on analysis and argument, or be an art that emotionally moves us? Should it seek to understand a whole society, or be content to uncover that society’s myriad parts? The answer to all of these questions is essentially yes. But this is where the history wars, old and new, merely begin. We call them wars because they matter; nations have risen and fallen on the success of their stories.

America’s Image Abroad Rebounds With Transition From Trump to Biden

But many raise concerns about health of U.S. political system

The election of Joe Biden as president has led to a dramatic shift in America’s international image. Throughout Donald Trump’s presidency, publics around the world held the United States in low regard, with most opposed to his foreign policies. This was especially true among key American allies and partners. Now, a new Pew Research Center survey of 16 publics finds a significant uptick in ratings for the U.S., with strong support for Biden and several of his major policy initiatives.

In each of the 16 publics surveyed, more than six-in-ten say they have confidence in Biden to do the right thing in world affairs. Looking at 12 nations surveyed both this year and in 2020, a median of 75% express confidence in Biden, compared with 17% for Trump last year.

The Trump-to-Biden shifts will snap up the headlines, but just 17% saying “democracy the US is a good example for other countries to follow” is not great. (Also check out Xi Jinping’s rating).https://t.co/xfnwwOVa6d

The Fundamental Question of the Pandemic Is Shifting

We understand how this will end. But who bears the risk that remains?

Framing one’s health as a matter of personal choice “is fundamentally against the very notion of public health,” Aparna Nair, a historian and an anthropologist of public health at the University of Oklahoma, told me. “For that to come from one of the most powerful voices in public health today … I was taken aback.” (The CDC did not respond to a request for comment.) It was especially surprising coming from a new administration. Donald Trump was a manifestation of America’s id—an unempathetic narcissist who talked about dominating the virus through personal strength while leaving states and citizens to fend for themselves. Joe Biden, by contrast, took COVID-19 seriously from the off, committed to ensuring an equitable pandemic response, and promised to invest $7.4 billion in strengthening America’s chronically underfunded public-health workforce. And yet, the same peal of individualism that rang in his predecessor’s words still echoes in his. “The rule is very simple: Get vaccinated or wear a mask until you do,” Biden said after the CDC announced its new guidance. “The choice is yours.”

From its founding, the United States has cultivated a national mythos around the capacity of individuals to pull themselves up by their bootstraps, ostensibly by their own merits. This particular strain of individualism, which valorizes independence and prizes personal freedom, transcends administrations. It has also repeatedly hamstrung America’s pandemic response. It explains why the U.S. focused so intensely on preserving its hospital capacity instead of on measures that would have saved people from even needing a hospital. It explains why so many Americans refused to act for the collective good, whether by masking up or isolating themselves. And it explains why the CDC, despite being the nation’s top public-health agency, issued guidelines that focused on the freedoms that vaccinated people might enjoy. The move signaled to people with the newfound privilege of immunity that they were liberated from the pandemic’s collective problem. It also hinted to those who were still vulnerable that their challenges are now theirs alone and, worse still, that their lingering risk was somehow their fault. (“If you’re not vaccinated, that, again, is taking your responsibility for your own health into your own hands,” Walensky said.)

Neither is true. About half of Americans have yet to receive a single vaccine dose; for many of them, lack of access, not hesitancy, is the problem. The pandemic, meanwhile, is still just that—a pandemic, which is raging furiously around much of the world, and which still threatens large swaths of highly vaccinated countries, including some of their most vulnerable citizens. It is still a collective problem, whether or not Americans are willing to treat it as such.

Top Texas House Republicans say they don’t know how the “overturning elections” section made its way into the state’s controversial voting bill #SB7, denounce it as “horrendous policy” + say they don’t plan to revive it in a special.

Which Groups Are Still Dying of Covid in the U.S.?

After the first vaccines were authorized for emergency use in December, with priority given to senior populations before younger groups, the share of those dying who were 75 or older started dropping immediately.

In turn, younger populations began to make up higher shares of Covid-19 deaths compared with their shares at the peak of the pandemic — a trend that continued when vaccine eligibility opened up to all adults. While the number of deaths dropped in all age groups, about half of Covid-19 deaths are now of people aged 50 to 74, compared with only a third in December.

“I think we still have work to do with that population. Particularly in difficult to reach populations, such as rural populations, ethnic and racial minority populations, homeless populations, people who don’t access medical care.”

As everyone chases Joe Manchin around the Senate basement, I strongly recommend this @sambrodey piece about the Democratic Senators quietly in agreement with Manchin, letting him catch all the arrows.https://t.co/yOCyLemf18

Why is Manchin such a thorn in the Democratic Party’s side? Let us count the reasons.

Here’s what political science tells us about party outliers.

Nearly 50 years ago, political scientist David Mayhew wrote about the importance of the “electoral connection” for understanding what makes lawmakers tick. Reelection, Mayhew argued, was every legislator’s immediate goal. No matter what other goals might motivate them, none of their ambitions — policy or otherwise — can be achieved if they are not first reelected.

As Occam’s razor would suggest, Manchin’s electoral environment back home best accounts for why he is out of step with much of the Senate Democratic caucus on voting rights and why he’s willing to block at least some of his party’s top priorities. As the only Democrat holding statewide office in West Virginia today, Manchin’s electoral future is precarious.

The NRCC’s message for the midterms is wages went up too much under Biden and they’ll keep people poorer? https://t.co/8I5d8f4fem

Many Democrats, both in the party’s centrist wing and even on the left, view the past five months as a story of the Good Joe and the Bad Joe. The Good Joe is the president, who has discarded the cautious centrism of Bill Clinton and Barack Obama for a bold economic agenda and honest talk about racism and white supremacy. The bad Joe is the Democratic senator from West Virginia, who has forced the party into fruitless talks with congressional Republicans and prevented the passage of a national voting rights law.

I am somewhat skeptical of this narrative. There are some signs that President Biden and his team, while not totally prisoner to what I view as old and misguided norms of the Democratic Party, aren’t fully free of them, either. So, no, it’s not all Joe Manchin III’s fault.

Here’s how I think Biden might be falling into five of those self-defeating norms:

Australia relents on Tamil family, but won’t allow them home