The stories of five journalists killed covering the Israeli-Palestinian conflict 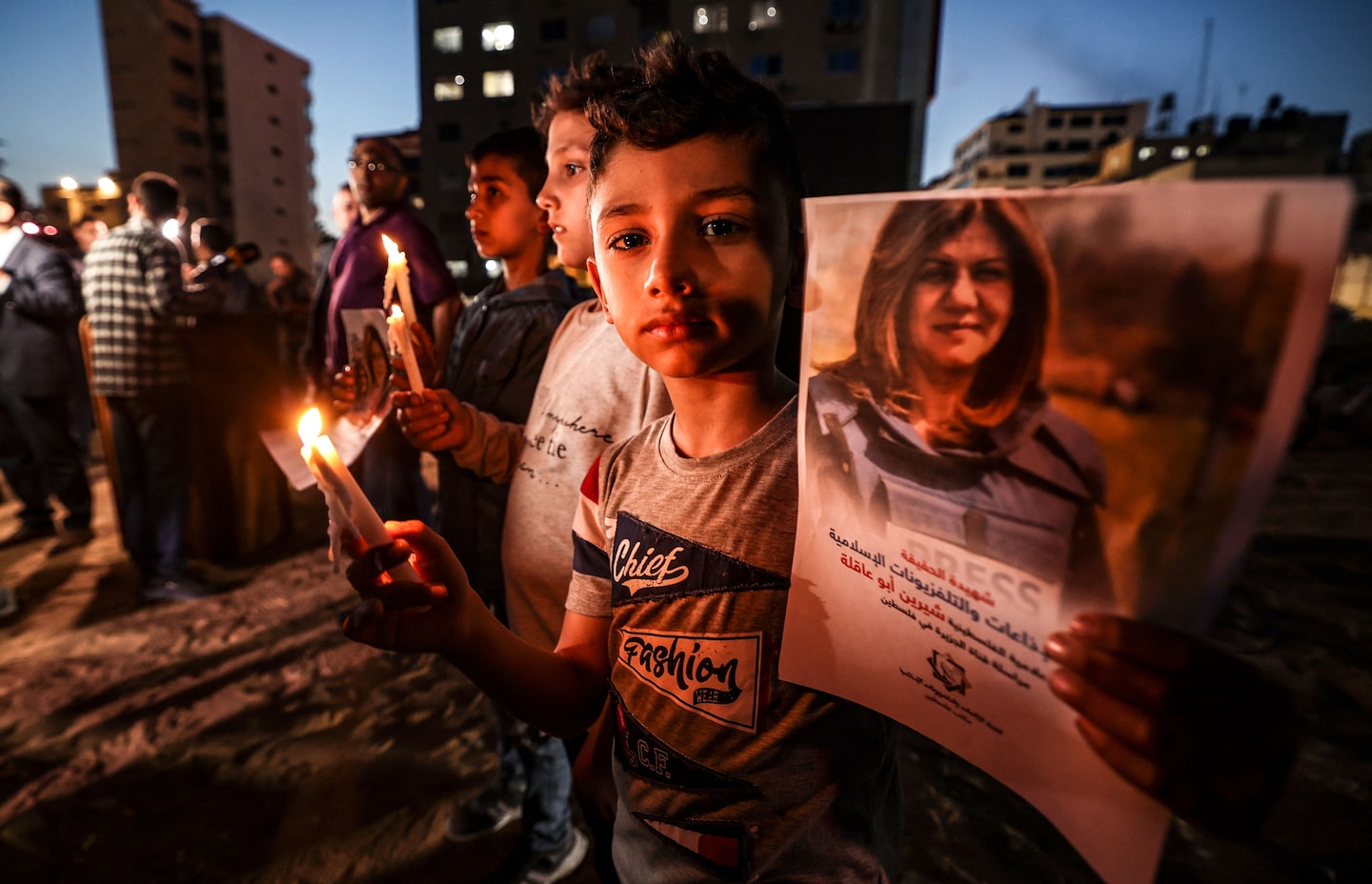 The death this week of Palestinian-American journalist Shireen Abu Akleh — who was shot dead during an Israeli raid in the West Bank city of Jenin — has highlighted the dangers reporters face while covering the Israeli-Palestinian conflict.

Abu Akleh, a veteran correspondent who worked for the Al Jazeera news network, was wearing protective gear and a vest marked with the word “PRESS” as she covered the morning raid Wednesday. Such gear is standard and meant to distinguish journalists from crowds and combatants while signaling to all sides that they should not be targeted.

For Palestinian journalists, a colleague’s death hits close to home

But at least 19 journalists have been killed in Israel and the Palestinian territories since 1992, according to the New York-based Committee to Protect Journalists. Sixteen of those killed were Palestinians, who disproportionately bear the brunt of the violence by Israel’s military in both the West Bank and Gaza Strip.

Here are the stories of five of the journalists who were killed.

Shireen Abu Akleh, 51, was a household name across the Arab world for her intrepid reports from her base in the Palestinian city of Ramallah. But she was killed Wednesday morning in Jenin, struck down by an Israeli sniper, according to Palestinian officials and eyewitness accounts.

Israel’s military immediately denied responsibility for her death — but later shifted to say it was investigating whether the bullet that killed her was fired by Israeli forces or Palestinian militants. Al Jazeera has accused Israel of directly targeting her “in cold blood.”

Witnesses told The Washington Post that there were no clashes between Israeli forces and Palestinian gunmen when Abu Akleh was shot. Israeli troops have conducted several raids in Jenin in recent weeks, following a wave of Palestinian attacks inside Israel.

Abu Akleh reported for more than two decades in the West Bank and East Jerusalem for Al Jazeera’s Arabic-language news channel. Her career inspired a generation of Palestinian women to pursue journalism, colleagues said. During the second Palestinian intifada in the early 2000s, Abu Akleh stayed in Jenin even after Israeli forces retook the city from Palestinian fighters and restricted press access.

State Department spokesman Ned Price said Wednesday that “those responsible must be held accountable.” The Foreign Press Association in Israel called “for full transparency” in Israel’s probe of her death, “given the Israeli security forces’ poor record of investigating violence against journalists.”

But human rights groups have also demanded an independent inquiry. Al Haq, a Ramallah-based Palestinian human rights organization, called on the International Criminal Court to include Abu Akleh’s case as part of its ongoing investigation into alleged Israeli war crimes.

Yasser Murtaja was a cameraman and photojournalist who co-founded a media production company in his native Gaza. At 30 years old, he had never traveled outside the tiny coastal enclave, which is ruled by Hamas and under an Israeli-led blockade.

An Israeli sniper shot and killed Murtaja in April 2018 as he covered large protests along Gaza’s border with Israel. Like Abu Akleh, Murtaja was wearing a clearly-labeled press vest when he was shot.

During the weekly protests, more than 200 Palestinians were killed and over 36,000 injured, according to the United Nations.

In an initial statement following Murtaja’s death, Israel’s military said that it did not target journalists. Israel’s defense minister at the time, Avigdor Liberman, then alleged that Murtaja was a member of Hamas’ military wing — an accusation his colleagues denied.

Just a month before he was killed, the U.S. Agency for International Development afforded Murtaja’s company a grant and said that its standard applicant vetting process found no ties to militant activities. In 2015, Hamas authorities — which also clamp down on the press — arrested and beat Murtaja for filming in an area without permission.

Simone Camilli, 35, was an Italian photojournalist for the Associated Press. He died in August 2014 while on assignment in the Gaza Strip.

He was photographing local police as they defused unexploded ordnance from the war between Israel and Hamas when one unexpectedly detonated. Camilli’s Palestinian translator also died in the explosion, which seriously injured another AP photographer.

He was the only foreign journalist to die as a result of that conflict, which lasted from early July to the end of August. More than 2,200 Palestinians, 73 Israelis and one Thai citizen were killed, according to the U.N.

Camilli spent nearly a decade covering major stories across Europe and the Middle East for the AP. He was particularly passionate about covering Gaza, according to his colleagues. The AP described him as “a consummate storyteller — a passionate, talented newsman with an eye for detail and the ability to convey events with powerful video images that touched people around the world.”

Fadel Shaana, 23, was a Palestinian cameraman for Reuters. He was killed in Gaza in 2008 when an Israeli tank opened fire on him and his film crew.

The tank and its bursting shell were the last images he captured from his camera, which was mounted on a tripod. The attack also killed eight other civilians.

Shaana was wearing blue body armor marked with the word “PRESS” and had traveled in a car marked with “TV.” The Israeli military expressed “sorrow” for his killing but told Reuters that its forces faced “ongoing fighting against armed, extreme and dangerous terrorist organization” in the area. Sixteen other Palestinians and three Israeli soldiers were killed in Gaza the same day.

Four months later, an Israeli investigation exonerated its troops, concluding they were “unable to determine the nature of the object mounted on the tripod and positively identify it as an antitank missile, a mortar, or a television camera.”

Reuters rejected the findings and demanded an independent investigation. Israel “was in clear breach of its duty under international law to avoid harm to civilians,” the agency said in a rebuttal. “Reuters and media rights groups believe the army action and its apparent policy curbs media freedom by rendering it too dangerous to use a camera in the presence of Israeli troops.”

British freelance journalist James Miller, 35, was fatally shot and killed while filming a documentary in Gaza in May of 2003. Miller and his crew were attempting to leave the home of a subject when, colleagues and eyewitnesses said, an Israeli tank opened fire. Earlier in the day, Israel had carried out house demolitions and operations in the area against alleged Hamas tunnels connecting Gaza and Egypt.

Miller and his crew were dressed in protective gear and marked as journalists. Colleagues said they had been signaling to Israeli forces plans to leave when he was shot.

The Israeli military denied responsibility and said Miller was killed in crossfire by a Palestinian bullet. A subsequent Israeli investigation exonerated the troops involved. Miller’s family rejected Israel’s findings and pushed for an independent inquiry. In 2006, London’s St Pancras Coroner’s Court ruled that Miller had been deliberately killed based in part on the findings of a private investigator hired by Miller’s family immediately after his death.

No one in Israel has been charged.

‘Freedom Will Win,’ Zelensky Says in Address to British Parliament