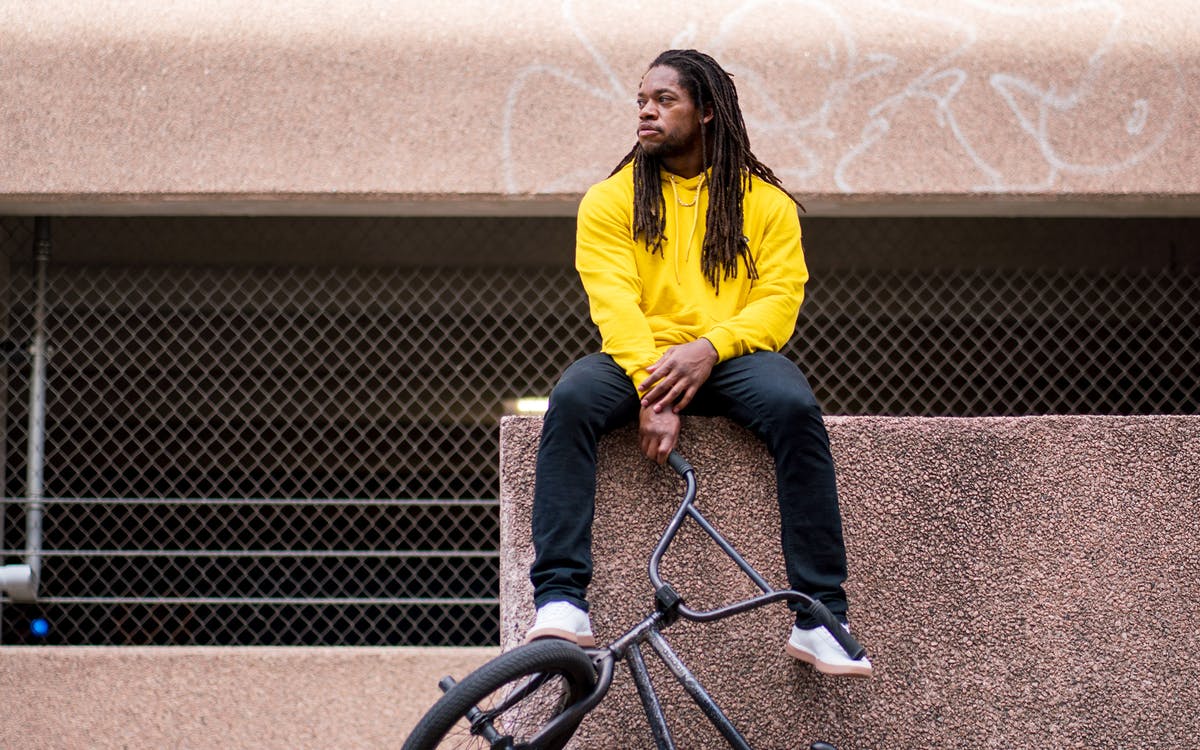 Brad Simms is sprinting toward the jumps. The freestyle pro and I are riding the mountain bike trails in Milton Reimers Ranch Park, about 45 minutes west of Austin. Specifically, a downhill “flow trail” with a sign extolling the dangers below: WARNING! SERIOUS INJURY IS POSSIBLE. RIDE AT YOUR OWN RISK.

Simms rips around a berm, floats through a rhythm section on just his rear wheel, and playfully flicks his mountain bike up and over a shin-high limestone ledge. “You were going really fast!” I wheeze when I finally catch up to him. Simms smiles, “What’d you expect?”

A few miles later, we’re coasting down the park road toward the Pedernales River when Simms leans back, effortlessly pulling a wheelie without pedaling. As he rides in front of me, I notice his rear wheel wobbling slightly from side to side. The damage occurred before this ride, he says, when he “bottomed out” landing a jump. The force with which Simms performs tricks can cause bikes to crumple beneath him, which is part of the reason why many top mountain bike brands pay him to test their products—if Brad can’t break a bike, likely no one can.

Videos of the Waldorf, Maryland, native’s awe-inspiring BMX and mountain bike stunts regularly go viral on social media. His tricks seem to defy gravity—soaring dozens of feet from the ground to ride a vertical wall or floating off a two-story drop and throwing a bar spin on the way down. He moves with an athletic explosiveness and agility honed by boxing and playing football in his youth, as well as with a silky-smooth style that’s all his own. An online influencer with crossover cred, his has hundreds of thousands of social media followers include everyone from hip-hop stars such as Benny the Butcher to middle-aged dads (like, well, me). Adidas and Taco Bell have planned marketing campaigns around him, and he even has a signature snack, a peanut butter and dark chocolate squeeze pack made by Split Nutrition.

Simms accrued most of his Instagram followers while using the infrastructure in and around Austin as his personal performance venue. Over nearly two decades as a pro, Simms had ridden BMX bikes in more than one hundred countries and won multiple X Games medals. But in 2020, at the age of 34, he found himself broke, without a major sponsor, and “full of excuses,” he says. He contemplated working construction or becoming a security guard. Then the COVID-19 pandemic hit.

On Austin streets emptied by the lockdown, Simms’s creativity flowed. For audiences stuck at home and glued to their phones, he released clip after jaw-dropping clip. “Every time you looked at your Instagram, boom, [another] Brad Simms video and it’s insane,” recalled Dennis Enarson, a fellow pro rider. Simms developed a mastery of social media, revived his career, and successfully transitioned to mountain biking—becoming one of the few Black world-class riders in an overwhelmingly white sport. Amid our nation’s reckoning with race, Simms says, he found his voice as a Black athlete and didn’t shy away from making racial justice a part of his platform.

I was among the folks who felt inspired while watching Simms reinvent himself, riding his bike around the city where I live. We connected through a mutual friend in Austin’s BMX scene, and on the day I rode with him, Simms told me that 2020 wasn’t the first time that he’d felt his back was against the wall and then was saved by his bike.

Simms describes his youth in southern Maryland as unstable. “My mother was never content with where we lived, I guess because she experienced the same thing during her childhood,” he says. His mom’s brother, Mark Thompson, raced and regularly won at a local BMX track, and Simms soon started tagging along. From there, Simms quickly progressed as a freestyle rider. He began building and riding dirt jumps with an older BMX rider, Jon Saunders, with whom he remains close. “His parents were dealing with their own stuff,” Saunders says. “Which allowed Brad to be gone.” As a teen, Simms rode in BMX events around Baltimore and Washington, D.C., and then he began traveling around the country to compete. “I don’t think a lot of other kids would have gotten that freedom,” Saunders says.

As a teenager, Simms began putting himself in poor situations—“either out of boredom or frustration,” he says. In 2004, he got in a fight in Maryland and spent a week in jail. Saunders says Simms wasn’t known for starting trouble and that he was defending a friend in the incident that put him behind bars. Locked up with other men, eating prison food, Simms saw how “You pay with your time, you pay with your sanity.” He told himself, “When I get out, I’m riding.”

Because he had some money set aside, he was able to hire a lawyer and pay his court fees. While he was still on supervised probation, Simms got an opportunity to ride in the Shook video series, known for launching pro BMX careers. When the video came out, Brad’s reputation grew as a rider who could hop higher and grind further than almost anyone else. He joined a BMX team with a budget for international travel, fulfilling his dream to see the world. Between per diem payments and the generosity of friends and fans around the globe, Simms managed to extend work trips for months at a time. He waded through herds of goats on the Pamir Highway in Tajikistan, gazed across the ochre rocks of the Fish River Canyon in Namibia, visited American troops in Iraq, and studied Slavic languages in Russia.

But of all the places he’d been, Simms had never ridden downtown Austin, a hub of the street riding scene. By 2020, his income from appearances in BMX magazines and DVDs had mostly dried up. So Simms made a plan. He gave himself six months to increase his social media following and learn digital marketing. He knew that in Austin, there would always be local riders game to pedal with him and film his tricks. He scraped together some money and moved to Texas.

Then the pandemic hit, and the world went into lockdown—which wound up benefiting Simms. Locations once filled with people and vehicles were now open season, with no security or police in sight. With every clip he posted to social media, Simms knew, “I was in your face. You couldn’t avoid me.” He adds, “I had a list of spots to hit, and the tricks I wanted to do there.” He rode every day, ticking places off his list and posting videos along the way. There was Simms, jumping up two flights of stairs on the University of Texas campus. There was Simms, in front of city hall, leaping a granite boulder the size of a small human. There was Simms, pulling a manual to three-sixty at Third Street and San Jacinto. “People thought everything had been done in Austin, and then here comes Brad,” says Sandy Carson, an Austin-based photographer and former BMX pro.

Simms’s Instagram following grew from just over 100,000 followers to well over 300,000. (He’s now pushing 400K.) Two leading BMX outlets named him the 2020 Rider of the Year. One of his goals was to land brand deals beyond the BMX world, and in January 2021, he secured a partnership with Adidas. The brand’s Five Ten line of shoes is an established product in the mountain biking world, so transitioning to bikes with bigger wheels and ample suspension made sense for Simms. Though he had little experience with mountain biking and was in his mid-thirties already, he saw the discipline as a way to extend his career and venture beyond BMX. A few months after the Adidas deal, he became an ambassador for the German brand Canyon, makers of some of the world’s most revered bikes. Other major mountain bike companies—SRAM parts, Maxxis tires, RockShox suspension—soon joined team Simms as well. A couple years prior, Simms had been struggling to pay rent, and now he was house shopping in Central Austin.

Simms and I are beneath a tall bluff, rolling our bikes along the Pedernales River when I overhear a conversation between two middle-aged women wading into a nearby pool: “My nephew did quite well in his gravel bike race last weekend.” Brad and I start up a conversation with the women, who want to know all about Simms’s mountain bike and if he gets hot, riding in jeans. Encounters like this are part of his job as a brand ambassador, whether they occur serendipitously or at industry events.

Simms is still figuring out how to differentiate himself as a mountain bike rider, and the right content strategy for his new discipline. People ask Simms if he intends to ride the Red Bull Rampage, the world’s biggest freeride mountain bike event—he doesn’t have a death wish, he jokes. But he’s certainly feeling pressure. He’s suffered online abuse and racist memes suggesting that his success in courting global brands is because of his skin color, not because he’s one of the world’s best riders. Over the past decade, Simms has led the way for a wave of Black BMX pros, including Adidas’s recent addition of BMX talent DeMarcus Paul. Simms could have a similarly positive effect in attracting a more diverse group of recreational riders to mountain biking, a sport in which fewer than 1 percent of participants identify as Black.

Back in January 2022, while driving home to Maryland to celebrate his grandfather’s one hundredth birthday, Simms stopped in Richmond, Virginia. He felt the city’s monument to Confederate general Robert E. Lee would make a good spot for a trick. He rode up the structure’s concrete embankment, planted both tires on the pedestal and threw a tailwhip on the way back down. A photographer for the Richmond Times-Dispatch snapped a shot of Simms in midair. The next day, he appeared on the paper’s front page, along with a story about the planned removal of the monument’s pedestal. When Simms posted his video of the trick online, he also included his many failed attempts to stick the landing, he says, “Because no one does something perfectly on their first try.”