The ‘one of a kind’ Beirut theatre surviving Lebanon’s crises 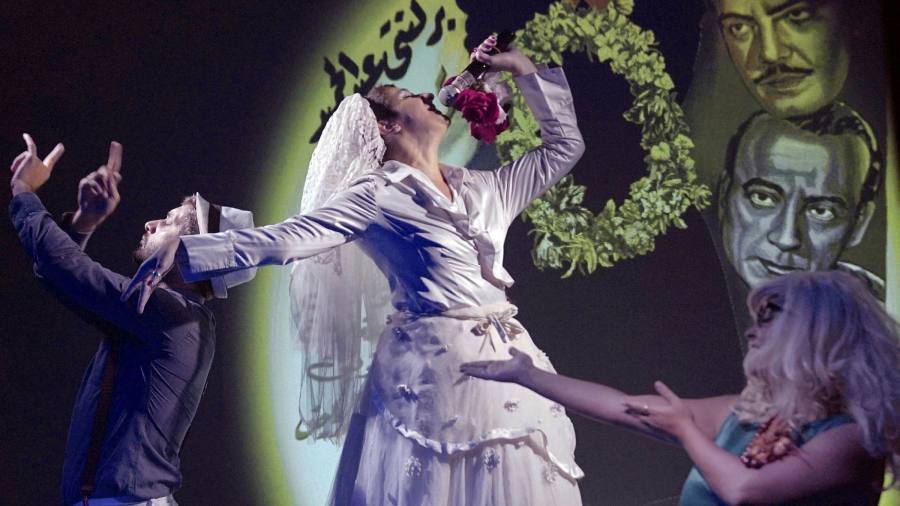 On a recent night at the Metro al-Madina theatre in Beirut, comedian Nour Hajjar strutted across the stage, skewering Hizbollah militants and the bankers blamed for Lebanon’s financial meltdown.

The humour is abrasive, but the bigger surprise is the fact that in the face of the country’s catastrophic economic conditions — hyperinflation, coronavirus lockdowns, a collapsing economy and a devastating explosion at the capital’s port in 2020 — Metro al-Madina has survived, putting on shows almost every night.

Metro is only 10 years old but the theatre, located in a basement in the heart of the city, quickly became a Beirut institution with its spectacular shows presenting cabaret, burlesque, belly dancing, political satire and musicals. After the show, the action often moves to the theatre bar, where the audience lingers to dance late into the night.

While many musicians and performers left the country after the port blast, part of an exodus of Lebanon’s brightest and best-educated citizens, Hisham Jaber, founder and artistic director of Metro, said he “just had that silly feeling that I want to be here”.

“We reopened after the last coronavirus lockdown with the economy collapsing and the dollar soaring,” he said. “It felt like those video games when you go from level to level, first fighting against a human enemy, then the dragon, and finally the beast. The entertainment scene was like it had been nuked.”

In order to survive, Metro had to adapt. Jaber said he had reduced ticket prices and that though the 120-seat venue operated at half capacity owing to Covid-19 restrictions, audiences had come back. Fifteen per cent of tickets are sold on a “pay what you can afford” basis. “You feel they need live shows,” said Jaber. “They are surprising us by returning. This city has fallen into a depression and it needs something to make it happy.”

Power cuts plunge Beirut into darkness every night. For Metro, fuel is now a formidable expense because electricity supplied by the Lebanese state company is available for only two hours a day. The theatre has its own generator and subscribes to a private generator service to ensure a constant power supply.

After costs, remaining profits are shared among the staff, which includes around forty core performers, said Jaber. A venue that prided itself on sustaining itself through ticket sales has had to resort to rescue funds from the Lebanon Solidarity Fund, set up by civil society groups to support artists affected by the crisis.

Metro hosts independent performers but also produces much of what is shown on its stage. One such show is Hishik Bishik, a revival of Egyptian songs from the golden age of cabaret in the first half of the 20th century that has been a major hit, presented hundreds of times over the years.

“Before Metro we didn’t have a venue like this with such diverse programming,” said Helena Nassif, executive director of Mawred, a Beirut-based civil society organisation which supports the arts, and which co-founded the Lebanon Solidarity Fund.

“This diversity makes it one of a kind, and as such it has allowed many artists to live off their work, which is amazing,” said Nassif. “You can attend and become part of Beirut nightlife and if you don’t have money you can still go because you can just buy a ticket without the food and drink.”

Yasmina Fayed, a singer and one of the theatre’s stars, said that when Jaber decided to reopen, she wondered whether it made sense at a time when people could not make ends meet. “As performers each of us has a story, a worry about a medicine missing from the market or the fuel crisis,” said Fayed. “But as soon as we are out on stage it is as if we and the audience are radiating solidarity to each other.”

Roula Murr, a university professor out with a friend, said: “We come here to change our mood, to laugh a bit and get some entertainment.”

Jaber’s ambition is to expand the theatre even though he lacks the money to do so. Expansion would be based, he said, “on a partnership between us and the audience”. Metro is also working on a donor-funded programme to train seven talented young people to become well-rounded performers and then participate in the theatre’s shows.

“After this collapse, we need to be prepared for rebuilding when the moment arrives,” he said. “We should have those professionally trained people. We also need people with vision who are progressive so we can press the restart button. It is for the sake of beauty, art and culture, and for the soul and the joy of this city. Without this, Beirut becomes a bland place with no taste.”