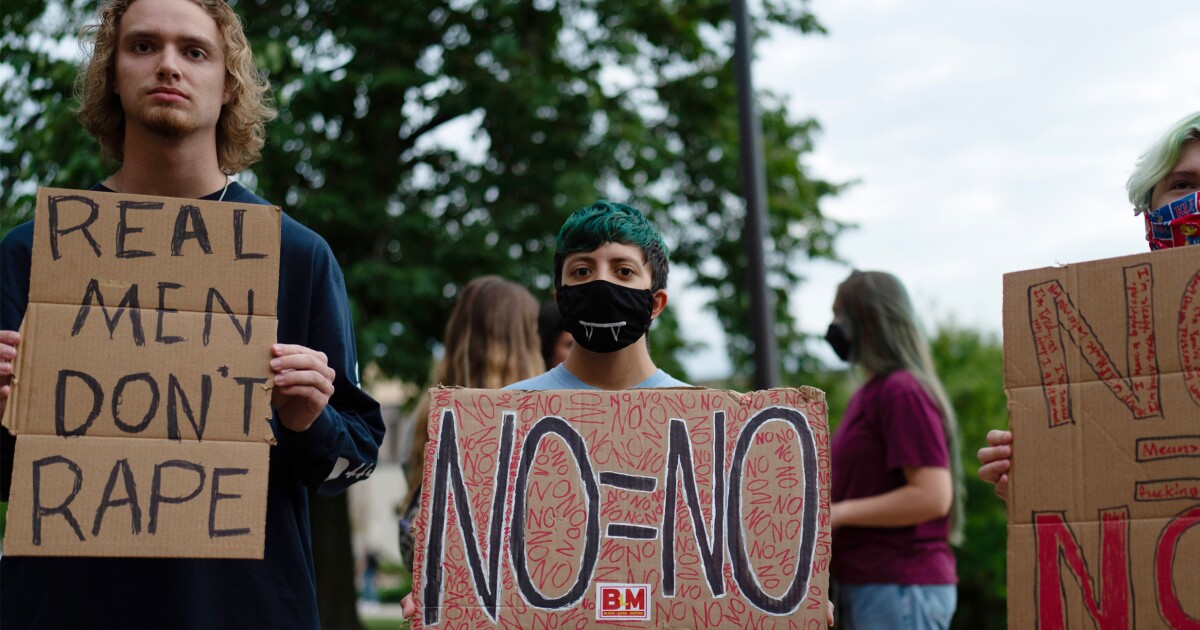 It was with a sense of déjà vu that Lyndsey Baker stood in front of Strong Hall at the University of Kansas last week, calling on the administration to do more to prevent and address sexual violence. Seven years earlier, she’d stood on the same lawn, at the same university, fighting for the same things.

In 2014, the Lawrence flagship campus was one of dozens to come under federal investigation for its handling of rape allegations. Students across the country rose up to demand their colleges uphold their rights under Title IX, the federal gender-equity law, and take sexual-assault allegations seriously.

This fall, Kansas is once again among dozens of campuses beset with student protests — this time, spurred by a sexual assault reported at a fraternity house in September. Thousands of students rallied in front of the house for consecutive nights, demanding the frat be removed from campus.

“KU isn’t protecting people like they should be,” said Baker, who is receiving her second bachelor’s degree from KU. She’d returned to the lawn in front of the administration building for another demonstration, coordinated on Instagram by Kansas students and alumni to take place on the same night as those at several other colleges. Their goal: Harness the power in numbers to draw national attention to their cause and pressure administrators into action.

KU’s chancellor, Douglas Girod, did not respond to requests for an interview.

To those who’ve been in higher ed long enough, this semester’s protests may look familiar, but the activism has evolved. The student activists of today, who came of age in the #MeToo era and witnessed racial-justice protests transform their colleges, are reassessing what they want their campus social environments to look like after the limbo of the last year and a half. They are experts in using social media to call out their colleges, rally their peers en masse, and press administrators into immediate action.

Gone are the days when a campuswide email was a sufficient response. The campus-activism game has changed, and administrators need a new playbook.

tudent activists have been using social media to organize for years. And because, as the saying goes, the internet is forever, social media has created a digital archive — documentation of “cycles of unmet demands,” as Katherine S. Cho, an assistant professor of student affairs in higher education at Miami University of Ohio, put it.

During racial-justice protests at the University of Missouri in 2015 and 2016, Black students took to Twitter to highlight their experiences. And during the 2020 Black Lives Matter protests, hashtags and accounts with the phrase “Black at” cropped up on Twitter and Instagram, with students of color sharing anonymously what it was like to attend predominantly white institutions.

What has changed recently are the capabilities of new (and revived) platforms. This includes TikTok, a video-sharing app that many activists are using to dramatically increase their reach and connect with other campuses, and Yik Yak, a platform that allows users to post anonymous messages visible to anyone in their five-mile radius. Even Instagram, a photography powerhouse that’s been around for more than 10 years now, has become more recently a vital tool for activists to share infographics, fliers, and announcements.

Chris Linder, an associate professor of higher education at the University of Utah, said the perception of which social-media platforms college administrators and other authority figures are using could inform where students choose to do activist work.

“I have students tell me all the time, ‘Facebook is where my grandparents are,’” she said. “Students are not there.”

But if students and administrators are communicating in different spaces, how can the disconnect ever be bridged?

Administrators, Cho said, “think that sending an email to the university saying, ‘This is the progress we made,’ is going to be read by students. I say that as somebody who also sends emails to my students. But where are the students talking about this, and where are they getting the idea that progress isn’t being made? … I think that that’s where institutions need to [join] the conversation that students are very much already having on social media.”

t the University of Nebraska at Lincoln, where massive protests broke out in response to a sexual assault reported at a fraternity house this fall, administrators are trying to reach activists on the platform where they’re organizing. A student-created Instagram account demanding that the fraternity be banned from campus has garnered more than 30,000 followers and racked up 480,000 signatures on a petition.

The university shared to Instagram a nearly three-minute video of Chancellor Ronnie Green addressing the reports and condemning sexual assault. Green’s video, which was also emailed to students and posted on other social-media platforms, has been viewed more than 85,000 times on Instagram and received more than 1,100 comments, expressing a range of opinions. Deb Fiddelke, a UNL spokesperson, told The Chronicle that Instagram is the platform where the university gets the most engagement from students; she emphasized that they do not try to “police” the dialogue in the comments, which can sometimes be inflammatory.

“Whether it’s sexual assault or free speech or whatever it may be, institutions of higher education are increasingly confronting these issues that become passionate conversations within their community,” Fiddelke told The Chronicle in an interview. “The best way to address those is to respond quickly. Let people know that you’re hearing them, engage in a dialogue about what can be done. … That’s what we did.”

Fiddelke acknowledged that students are waiting for the university to implement some promised changes, including doubling the number of victim advocates; implementing a new plan for sexual-misconduct training; and moving several resource centers, including the women’s center, into one building on campus.

“We’re still in the process here, but I would say things have calmed down considerably,” Fiddelke said. “People appreciate the steps that have been taken and are watching us closely just to make sure we keep our word. As they should.”

xperts clarify that social media is just the means, not the activism itself. That it has become such a vital organizing tool, however, requires higher-education leaders to stay vigilant. Students nowadays expect immediate responses, experts say, putting college administrations under pressure to avoid reputation crises.

But there is only so much college leaders can do to avoid a crisis of legitimacy.

The return of Yik Yak has many administrators concerned, as the anonymous, location-based message-board app has been fertile ground for hate speech, bullying, threats, and misinformation. At the University of Massachusetts at Amherst, protests broke out over a Yik Yak post from a user who claimed she had been raped at a fraternity house.

In a message to the campus community during the protests, Chancellor Kumble R. Subbaswamy emphasized that no formal complaint or report had been filed to substantiate the claims spreading on social media. He encouraged those with direct knowledge of the alleged incident to contact the university.

“While we respect and support a survivor’s decision whether or not to report an assault or pursue sanctions, we cannot take action against alleged perpetrators, whether they be individuals or organizations, without actionable evidence,” Subbaswamy wrote.

Fiddelke said Yik Yak contributed to misinformation regarding the reported assault at UNL. But she said it is important that administrators don’t lose their focus trying to drown out rumors.

“There were details related to the incident that prompted these protests that were inaccurate,” she said. “And you just have to deal with that and understand that that’s going to occur. You can’t hope to tamp down every little piece of misinformation out there … Stay abreast; get the facts out there when you’re able.”

his fall’s activism has also taken on a different tone from previous surges — a more inclusive, more forceful thrust, which experts say is informed by the events of the past several years. Today’s students are returning to class with “pent-up energy” after more than a year of virtual and hybrid learning, said Angus Johnston, a historian of student activism and history professor at Hostos Community College. And thanks to the racial-justice protests of last summer, many are entering with a greater awareness of systems of power and oppression — and one’s role within them.

Relatedly, the fall protests have emphasized survivor support, solidarity, and self-care. We could be seeing a peak in activism tied to the #MeToo movement, Johnston said.

“Women on campus have been protesting Title IX policies, protesting sexual assault and rape, protesting faculty sexual misconduct for quite a while,” Johnston said. “And in some respects, the #MeToo movement follows something that had already been happening on campus. But now, it’s circling back again to the campus.”

Linder, the University of Utah professor, noted that every protest is unique, nuanced by its context.

At last week’s protest at the University of Kansas, about two-dozen students gathered to take part in a nationwide protest effort against sexual assault, titled “Against Our Will.” It had been organized by KU’s Strip Your Letters campaign, which encourages sorority women to stop wearing their Greek letters and posting them online in an effort to pressure leadership to make Greek life more inclusive.

Grace Reading, a 2021 KU graduate and one of the founders of Strip Your Letters, said the turnout was not what organizers had hoped for, but they were able to turn the event into a productive dialogue with the administrators in attendance.

The students and administrators went inside, asking press to leave due to the sensitivity of the matters that would be discussed.

“The demands that we [set] were met,” Reading said. “I would call it an effective night, even though it might not have been the most flashy presentation. And there were a million other points where students expressed their frustrations and felt like they were heard in a way that was meaningful to them. At the end of the day, that’s what matters.”

KU student body president, Niya McAdoo, a senior, said dialogue is an important accompaniment to protest because it offers college students the chance to ask administrators questions about their rights and responsibilities, and learn more about where to access resources.

Still, McAdoo said, administrators “owe students the time to be angry and to express their anger and that frustration with them in the way that students need to do it — so that from there we can sit down and have the dialogue and be like, ‘OK, now I’m ready to speak with you. Now I’m ready to feel supported by you or to have my questions answered by you.’”

The listening process is key to building trust with students, said Linder, the University of Utah professor.

“[Administrators] are not very good at explaining or sharing with students why we can’t do certain things,” Linder said. “We just say, ‘We can’t do that,’ because I think some administrators believe students couldn’t understand it or they don’t want to hear it. And that’s not been my experience.”

Jennifer Brockman, the director of KU’s Sexual Assault Prevention and Education Center, was one of the staff members who attended last week’s protest-turned-dialogue. In an email to The Chronicle, she expressed gratitude to the students who organized and attended the protest.

“I was extremely impressed with our students, as they brought up very insightful and challenging issues and experiences,” she wrote.

At 10 p.m. Tuesday evening, three hours after they arrived expecting a protest, the students and staff left Strong Hall, notes in hand, with plans to continue the conversation soon.

In a conversation the next day, Reading predicted more activism would happen “quietly” — a departure from the headline-grabbing protests of the last several months.

“I don’t know if there will be more protests at this point,” she said. “I’m sure they will surge back up again at some point.”