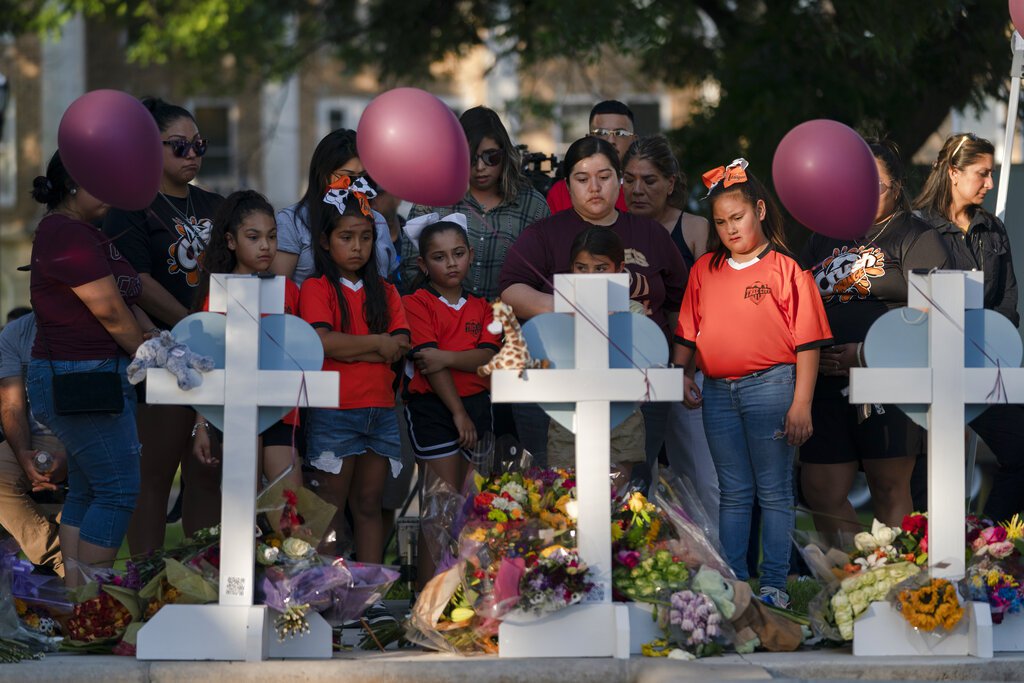 People gather at a memorial site to pay their respects for the victims killed in this week’s elementary school shooting in Uvalde, Texas, Thursday, May 26, 2022.

UVALDE, Texas  — Nineteen children were looking forward to a summer filled with Girl Scouts and soccer and video games. Two teachers were closing out a school year that they started with joy and that had held such promise. They’re the 21 people who were killed Tuesday when an 18-year-old gunman barricaded himself in a fourth-grade classroom at Robb Elementary School in the southwestern Texas town of Uvalde. Some families have been willing to share their stories with The Associated Press and other media. Others asked for privacy. Here are their names.

Her aunt noted that Nevaeh’s first name is heaven spelled backward. In a Facebook posting, Yvonne White described Nevaeh and her friend Jailah Silguero as “Our Angels.”

Javier Cazares said his daughter was someone who would give the “shirt off her back” to help someone. “She had a voice,” he said. “She didn’t like bullies, she didn’t like kids being picked on. All in all, full of love. She had a big heart.” Annabell Rodriguez, also a victim, was Jacklyn’s second cousin.

Makenna’s father asked on Tuesday if he could go to the local funeral home to search for his daughter because he feared “she may not be alive,” TV station KTRK reported. Her family later asked for privacy.

Jose’s parents told CNN that the 10-year-old was helpful around the house and loved his younger siblings. “He was just very good with babies,” his mother said. His father told CNN that Jose loved baseball and video games and “was always full of energy.” A photo taken at school Tuesday shows him smiling and proudly holding a certificate to show he made the honor roll.

Eliahna’s relatives recalled her love of family. “She was very happy and very outgoing,” said her aunt, Siria Arizmendi, a fifth-grade teacher at Flores Elementary School in the same district. “She loved to dance and play sports. She was big into family, enjoyed being with the family.”

Irma Garcia was finishing up her 23rd year as a teacher at Robb Elementary School. In a letter posted on the school’s website at the beginning of the school year, Garcia told her students that she had been married for nearly a quarter of a century and that she and her husband, Joe, had four children — a Marine, a college student, a high school student and a seventh grader. She told the students that she loved barbeque, listening to music and taking country cruises with her husband. On Thursday, Joe Garcia died of a heart attack, according to a nephew.

Uziyah’s grandfather called him “the sweetest little boy that I’ve ever known.” Manny Renfro said he last saw Uziyah when the boy came to his home over spring break. “We started throwing the football together and I was teaching him pass patterns. Such a fast little boy and he could catch a ball so good,” Renfro said. “There were certain plays that I would call that he would remember and he would do it exactly like we practiced.”

Amerie loved to paint, draw and work in clay. “She was very creative,” said her grandmother Dora Mendoza. “She was my baby. Whenever she saw flowers she would draw them.” For her 10th birthday, Amerie was given her first cellphone. Her father, Angel Garza, recalled that her face “just lit up with the happiest expression.” Garza said that Amerie’s friend told him that Amerie had tried to call the police on her phone before she was shot.

Xavier had been eagerly awaiting a summer of swimming. “He was just a loving … little boy, just enjoying life, not knowing that this tragedy was going to happen,” said his cousin, Liza Garza. “He was very bubbly, loved to dance with his brothers, his mom. This has just taken a toll on all of us.”

Carmelo Quiroz’s grandson had begged to be allowed to join his grandmother on Tuesday as she accompanied her great-granddaughter’s kindergarten class to the San Antonio Zoo. But, he said, the family told Jayce it didn’t make sense to skip school so close to the end of the year. Besides, Jayce liked school. “That’s why my wife is hurting so much, because he wanted to go to San Antonio,” Quiroz told USA Today. “He was so sad he couldn’t go. Maybe if he would have gone, he’d be here.” He died with his cousin, Jailah Nicole Silguero.

Faith Mata told The Washington Post that her sister loved TikTok dance videos, Ariana Grande, the Houston Astros, and having her hair curled.

The mother of a close friend described Miranda as “very loving and very talkative.” She told the Austin American-Statesman that her daughter and Miranda had been in the same classes and that Miranda would ask to have her hair done like her daughter’s.

In a post on the school’s website at the start of the year, the fourth-grade teacher said she had been teaching for 17 years. Mireles loved running and hiking. She said she and her husband, a school district police officer, had an adult daughter and three pets.

Alithia Ramirez loved soccer and she really loved to draw. Her father Ryan Ramirez’s Facebook page includes a photo, now shown around the world, of the little girl wearing the multi-colored T-shirt that announced she was out of “single digits” after turning 10 years old. The same photo was posted again Wednesday with no words, but with Alithia wearing angel wings.

Polly Flores told the New York Times that her great-niece Annabell Rodriguez was an honor roll student and close to her second cousin Jacklyn Cazares.

After a rough time with Zoom classes during the pandemic, Maite Rodriguez made the honor roll for straight As and Bs this year and was recognized at an assembly on Tuesday, said her mother, Ana Rodriguez. Maite especially liked physical education, and after she died, her teacher texted Ana Rodriguez to say she was highly competitive at kickball and ran faster than all the boys. Her mother described Maite as “focused, competitive, smart, bright, beautiful, happy.” Maite wanted to be a marine biologist and after researching a program at Texas A&M University in Corpus Christi she told her mother she wanted to study there.

Lexi’s mother, Kimberly Rubio, posted on Facebook that her daughter was honored for earning all A grades and received a good citizen award in ceremonies at the school shortly before the shooting. The fourth-grader was a softball and basketball player who wanted to be a lawyer. Lexi’s father, Felix Rubio, is a deputy with the Uvalde County Sheriff’s Office. The couple told CNN that he was among the law enforcement officers who responded to the shooting.

Layla’s father said she loved to run and swim, dance to TikTok videos and play games including Minecraft and Roblox with friends. He said she won all six of her dashes and hurdles races at the school’s past three annual field days. He said each morning as he drove her to school in his pickup, he would play “Sweet Child O’ Mine” by Guns N’ Roses and they would sing along.

Jailah’s mother tearfully told Univision that her daughter did not want to go to school the day of the shooting, and thought that maybe she sensed something was going to happen. Jailah and her cousin, Jayce Luevanos, died in the classroom.

Adolfo Torres told the Associated Press that his granddaughter, Eliahana, died in the shooting. Television station KIII reported that Eliahana was set to play the last softball game of her season that day. The team members kneeled for a moment of silence to remember Eliahana and the other victims.

Rojelio Torres’ mother, Evadulia Orta, told ABC News her son was a very smart and loving child. “I lost a piece of my heart,” she said.