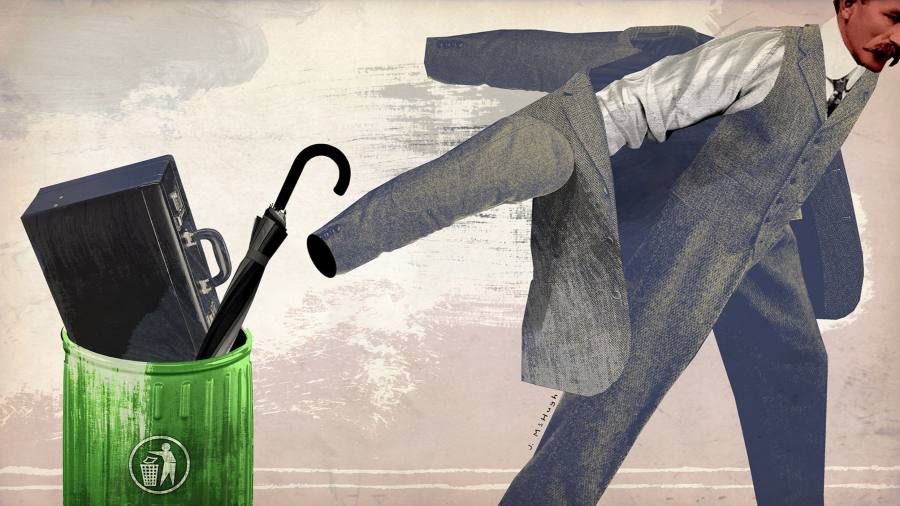 Growing up, I knew that falling out of work was the worst thing that could possibly happen. My mother lied about her age to keep paying the mortgage until she was 74. My father dictated his last magazine article to me from his death bed. Their jobs brought money, pride and meaning. So my reaction to the fact that 9mn Britons are neither working nor looking for work — some of them retiring at 50 — is emotional as well as practical.

Has the pandemic flipped some kind of unique psychological switch in Britain? I’m starting to think so. As the Bank of England warns that our shrinking workforce could stoke inflation even in recession, the UK is looking ever more like an outlier. We were not the only country to emerge from the pandemic with lower employment rates than before — so did Iceland, Switzerland, Latvia and the US. But those four are bouncing back; we are not. By March, the Institute for Employment Studies predicts that we may be the only developed country with an employment rate lower than it was before Covid-19.

I’ve previously written about the increasing numbers citing long-term illness as a reason for stopping work, together with the NHS backlog. But that’s not the whole story. Fifty-five per cent of the increase in “missing” workers has come from those aged 50 to 64. Many are retiring early not because they are too sick to work but because they are sick of working. New polling finds this group expresses a greater dislike of their jobs than their German and US counterparts, and are more likely to say the pandemic has made them rethink. Moreover, they believe they can afford it. In the UK, 18 per cent of economically inactive 50- to 64-year-olds report having become better off as a result of the pandemic, compared with 8 per cent in the US and 4 per cent in Germany.

It would be the ultimate irony if a pandemic that hurt our economy has left a whole section of the population thinking they can check out. The polling was done by Public First for the think-tank Phoenix Insights, on whose advisory board I sit. The following quote made me wince: “Watching the older generation being shoved into the care home Protective Ring and abandoned to Covid brought a strong realisation that I was looking at a possible version of my future”. The interviewee took early retirement “to thoroughly enjoy my remaining time”.

What have we done? The average death from Covid is 80, not 50. A government which kept millions afloat with generous furlough payments has still left us feeling we are on our own. Some over-50s are nobly caring for a spouse, elderly relative or grandchildren. Some may have fallen prey to the WFH delusion: the Institute for Fiscal Studies has found remote working makes people more likely to retire early. Others may have been lulled into believing that a more balanced existence could be sustained by a furlough scheme which should have ended earlier — in a country that allows people to cash in their pensions early.

We may never know. But what is clear from multiple studies is that health and happiness in later life is strongly correlated with a sense of purpose. I predict a Great Unretirement in a few years’ time, when the novelty has worn off and house prices have fallen. At that point we will need employers to realise that customers value staff who are the same age, and that the old can be more loyal than the young. Campaign groups argue for more flexible working. But to present everyone over 50 as needing special treatment plays into ageism and does a disservice to all those in this age group who are at the top of their game. Despite the tight labour market, I meet skilled accountants, academics, consultants and surgeons whose employers seem determined to push them out at 60.

“Training” is also floated as a panacea. But it needs tailoring. The challenge of persuading well-off professionals to unretire is very different to helping the 8.7mn people who are currently claiming means-tested out of work benefits. The pandemic has resulted in a big increase in people receiving benefits with no “work conditions” — or no obligation to seek a job — because of reported mental health issues or long term sickness. The Centre for Social Justice estimates that this group now numbers 3.5mn and is urging the government to support the one in three who say they would like help to get back into work. Could another pandemic consequence have been the Department of Work and Pensions failing to do its job?

Delving into the DWP data is a sad reminder of Britain’s history of long-term worklessness, which for so long was masked by immigration. Economic inactivity levels are most acute in some of the most deprived parts of the country, among the disabled and lone parents for whom the stresses of the past few years must have hit especially hard. Progress had been made in narrowing the gap between those groups and the rest over the past decade — but this has now been reversed. If we could close just half of these employment gaps to the best in Europe, the IES says, there would be a million more people in work.

Good health is the cornerstone of being able to work but it is hard to pin down. Ill-health is increasingly cited as the main reason for inactivity — but the second biggest condition people tick, after heart trouble, is not mental illness or a back or digestive problem but “other”. If this is a cry for help after the appalling strains of punishing lockdowns, it needs addressing.

I still believe that work is the best route out of poverty, a great way to maintain a sense of purpose in later life and to support mental health. If Britons have decided that it is optional, or even hostile, we are in serious trouble.

Crypto is back with $300bn frenzy