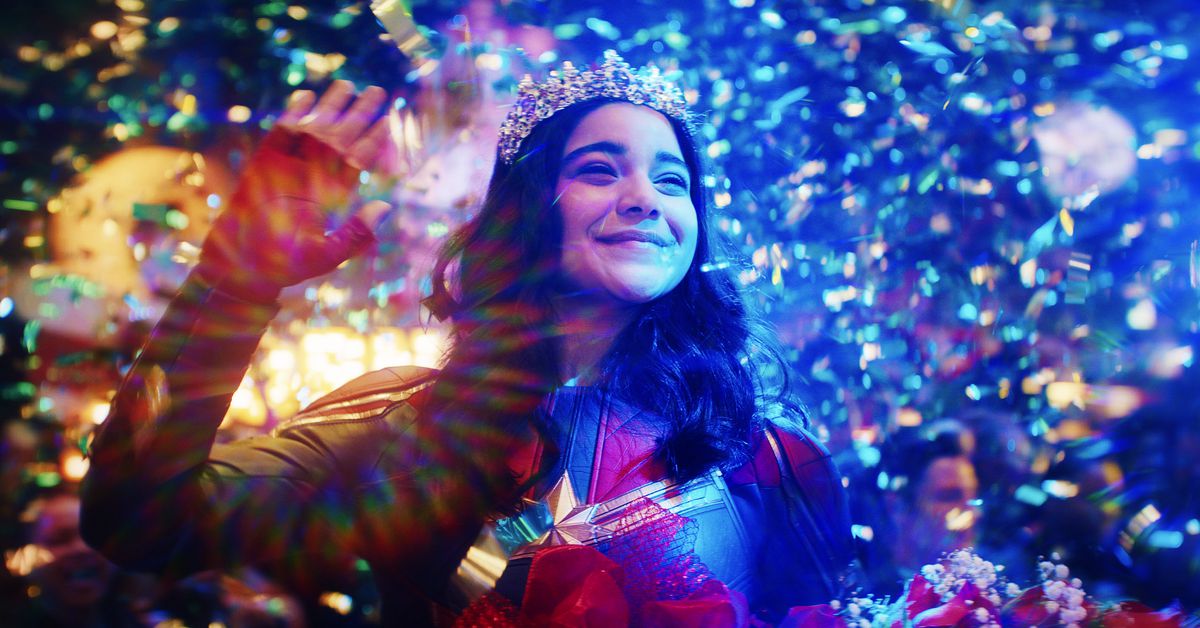 On August 31, 2009, comics fans were rocked by the news that the House of Mouse was absorbing the House of Ideas. The $4 billion dollar deal between Disney and Marvel Entertainment was just as surprising to those who followed corporate moving and shaking — but news stories quickly formed a consensus narrative. Outlets from the New York Times to the Guardian to Forbes agreed, Marvel Entertainment would hand Disney an audience the venerable studio was struggling to lure.

Speaking to Newsweek, Disney chief financial officer Tom Staggs put it in plain language: “We both have properties with broad appeal, but [Marvel properties] skew more toward boys.”

More than a decade down the line, with Marvel Studios dominating the entire mood of franchise cinema, Marvel Entertainment and its mousy parent are reaping what they’ve sown. The teenagers of 2009 are the 30-somethings of the 2020s, and the teenagers of 2022 are of a different breed. The future of Marvel Studios is in clawing back the youth audience, but this time, they’ve got a different plan. After a decade of drought, a certain kind of superhero is quietly cropping up in nearly every upcoming film on the company’s slate.

The Marvel Cinematic Universe is pivoting to girls.

Marvel sequels often expand their casts by adding on more heroes — Black Widow and War Machine in Iron Man 2, the Falcon and the Winter Soldier in Captain America: The Winter Soldier, the Wasp in Ant-Man and the Wasp. Marvel’s Phase Four (that is, everything from Black Widow on) takes that tendency and makes it a rule. And the rule is: add a superheroine. Ideally, a teenage one.

Black Widow has already introduced a younger legacy character with Florence Pugh’s Yelena Belova, and Eternals not only chose a female character, Sersi, from the ensemble group of comic book demigods as its lead — it also gender-bent the eternally teenage character, Sprite, who until the film had always been depicted in comics as male.

Of Marvel Studios’ upcoming feature films with release dates, only one (Guardians of the Galaxy Vol. 3) has so far declined to introduce a new superheroine. Doctor Strange in the Multiverse of Madness will welcome the queer, teen, Latinx character of America Chavez to the MCU. Thor: Love and Thunder will feature Natalie Portman’s unexpected return to the franchise to play Jane Foster’s ascension to the role of Thor. Even without the untimely passing of Chadwick Boseman, Black Panther: Wakanda Forever would likely still have leaned into the breakout popularity of Letitia Wright’s Shuri, but the film will also debut Dominique Thorne as Riri Williams, a Black teen girl who reverse engineers Iron Man’s armor to become the hero Ironheart. The Marvels will grab two superheroines from their Disney Plus debuts to star alongside Carol Danvers. Ant-Man & The Wasp: Quantumania will bring in Big Little Lies’ Kathryn Newton as the third actress to play the hero’s daughter, and the first to actually put on her super suit as fellow shrinking hero Stinger.

Things are much the same in Marvel’s rush to bring TV series to the Disney Plus service. WandaVision shone a light on the MCU Avengers’ second female recruit, and introduced Teyonah Parris as Pulsar. Loki introduced its own version of Lady Loki, while Hawkeye brought Kate Bishop and Echo to the screen. And the company’s future television slate is — when compared to previous output — shockingly female-led. Ms. Marvel, She-Hulk, Ironheart, Echo, Agatha: House of Harkness, and an untitled series featuring Danai Gurira’s Okoye are all on the board.

It’s a vigorous heel turn from a franchise that, in its first decade, had produced only two television shows (Agent Carter and Jessica Jones) with a woman as the sole title character, and didn’t make a single woman-lead feature film. It’s a show of faith for Marvel Comics’ deep well of diverse characters, many of whom are no more obscure than Iron Man was before the year 2008, and a show of faith that many fans have been demanding for over a decade.

There’s a certain amount of bullshit bandwidth that should be given to any research into generational trends. But whether or not the generalizations of such research are true, they’re still the generalizations that Disney and Marvel have to work with. And as the oldest Zoomers enter the workforce, a growing body of research on their cohort is coming to the same repeated conclusions.

According to the research, Gen Z is more racially progressive, more accepting of gender as a spectrum, and more queer and queer-accepting than any generation before it. They have a low tolerance for being pandered to, especially by corporations, they disdain brand loyalty, and they expect the brands they patronize to be socially responsible.

What’s more, there’s their recency bias. Millennials remember a time when an enjoyable superhero movie was a novelty, and a reliable superhero franchise? Practically unheard of. For every Batman Begins there was a Superman Returns, for every X-Men or Spider-Man there was an X-Men: The Last Stand or a Spider-Man III. But Hollywood’s repeated attempts to create interconnected film franchises are the mass media environment in which Gen Z became aware of the existence of mass media. The oldest of them were just on the cusp of teenhood when Iron Man hit theaters, and the youngest could share a birthday with Captain America: The Winter Soldier.

Superheroes aren’t the shiny new thing to them — they are the default edifice of cinema. Many members of the cohort were media literate and heavily online as the vibrant, female, queer-dominated online fandoms that rose up around the Marvel Cinematic Universe were met with a thundering and awkward decades-long silence. While the oldest millennials grew up with bowdlerized translations of Sailor Moon, Gen Z’s middle-grade television landscape has offered them the diverse worlds of Avatar: The Legend of Korra, Steven Universe, She-Ra, and Disney’s own Owl House. Gen Z is watching Disney’s repeated stumbles. They’re even protesting them.

Marvel Studios has to find new ideas to get a new generation hooked on the MCU as Millennials age out of the youth demographic, because this time around, an Avengers line-up of five white guys and one white woman is not going to cut it. Fortunately for Marvel Studios, they have something to fall back on: the actual House of Ideas.

While Marvel Studios was building the Infinity Saga, superhero comics were evolving. Perhaps the oddest shock of going back to of-the-moment reporting on Disney’s Marvel acquisition is remembering the 2009 industry perception of both companies. A large number of articles note Hannah Montana as Disney’s headline product, and almost all define the vibe of Marvel Comics as “tough” or “grim.”

Needless to say, those perceptions have changed — not least because Disney is now the house of not only Marvel but Star Wars, The Simpsons, It’s Always Sunny in Philadelphia, and the Alien and Predator franchises, to name just a few. But things have changed at Marvel Comics, as well.

And that’s just the first half of the decade. In 2015, Laura Kinney became the Wolverine in Tom Taylor, David López, and David Navarrot’s All-New Wolverine. In 2016, Jennifer Walters took the title role in Mariko Tamaki and Nico Leon’s Hulk series. In the same year, Bendis and Mike Deodato debuted Riri Williams as Ironheart.

For the writers, artists, and editors on these stories, the rewards of success often included being the target of vicious harassment aimed at punishing the creators of diverse comics. And it is now precisely that work that Marvel Studios is turning to for the billion-dollar movies and shows of the Marvel Cinematic Universe’s Phase Four, often with just a “thanks” in passing. Between WandaVision (Demiurge and Speed), Loki (Kid Loki), Hawkeye (Kate Bishop), and Doctor Strange in the Multiverse of Madness (America Chavez) alone, Marvel Studios has introduced five of the members of Gillen and McKelvie’s Young Avengers, with options for Shuri, Ironheart, Patriot (Eli Bradley) and Stinger (Cassie Lang) on the side.

This is not an accident. Marvel Studios’ POC-led franchises like Black Panther, Shang-Chi, and a new Captain America are already in the can. Queer-adjacent films are clearly an arena Disney prefers not to consider, which may explain why it’s been five years since Marvel Studios recouped the film license to the overwhelmingly popular and heavily queer-coded X-Men franchise without a peep of a new film. The future of the Marvel Cinematic Universe lies in Disney’s ability to gain the loyalty of the most progressive and skeptical generation yet, and there is only one “safe,” new axis of diversity for Marvel Studios to lean into: Women.

Classic Catan spinoff gets a reboot later this year: Dawn of Humankind