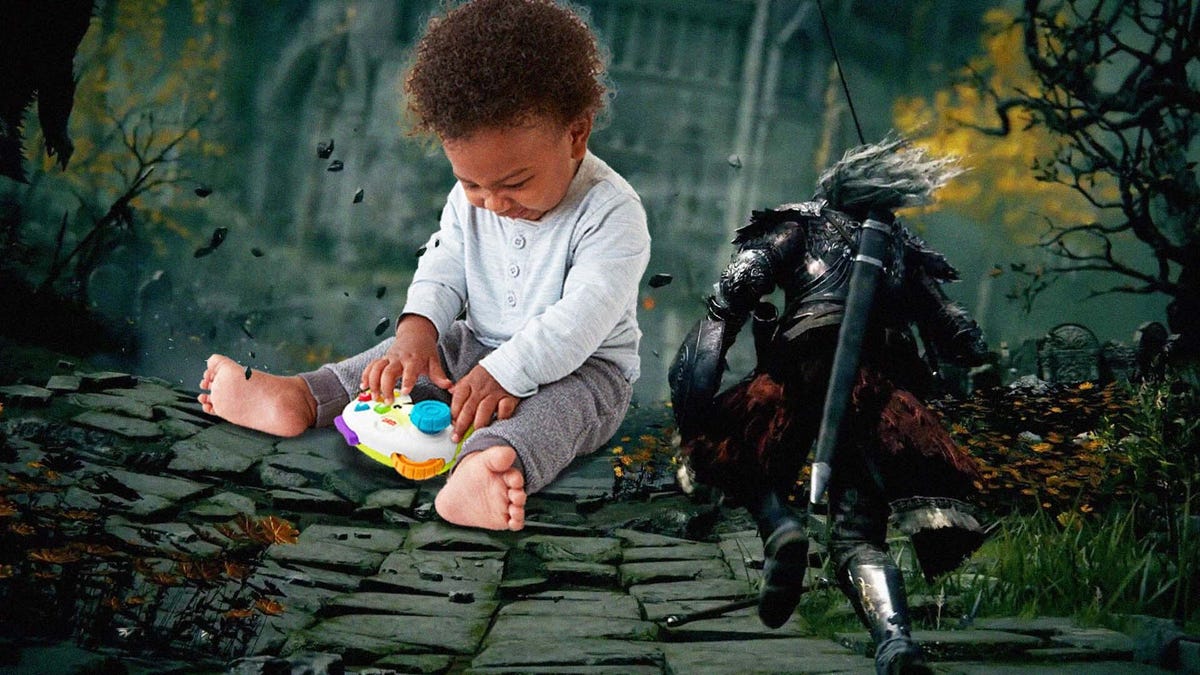 It’s time once again to reset the clock on the innovative and weird milestones players are up to in the Elden Ring community. This time around, a gamer modded a children’s toy into a playable Xbox controller. This isn’t an Onion article, you’re in the right place.

Dylan “Rudeism” Beck, a YouTuber who “plays games wrong,” modded a Fisher-Price Game & Learn Controller into a fully-functioning big boy controller. For those uninitiated in the Babies “R” Us lifestyle (RIP Geoffrey The Giraffe) the Fisher-Price Game & Learn Controller, much like any other game controller, is an educational toy for 6-36 month old gamers-in-training to learn shapes, colors, the alphabet, and numbers– all while fine-tuning their hand-eye coordination and fine motor skills. But instead of hunkering down for some hardcore “letter-learning action,” Beck wanted to use the toy against bosses in Elden Ring. While the toy is shaped like a controller, it’s not necessarily set up to be used with modern consoles.

The inspiration for Beck’s invention came after Wario64, patron saint of all things gaming deals, tweeted an off-hand joke about the Fisher-Price Controller saying it was “perfect for Elden Ring” but “may not be allowed for EVO.” Beck took this personally. Over the course of two weeks, Beck toiled away, modding the formative children’s toy into an all-grown up controller according to The Verge.

You might be wondering how one would go about upgrading your child’s early academics toy into a game controller, y’know for the kid. Well, it turns out all you need to do to give the Fisher-Price controller an Elite growth spurt is to add an Arduino Pro Micro clone controller board, actual joysticks, and some microswitches to its shoulder buttons and voilà, baby’s first controller just got its training wheels removed.

Worry not, Mattel faithful, despite its lack of space for a battery, Beck’s modded controller still has all the OG Learn Controller’s sound effects and songs to inform you that “1, 2, 3, 4, up goes your score.” as well as its Konami Code easter egg.